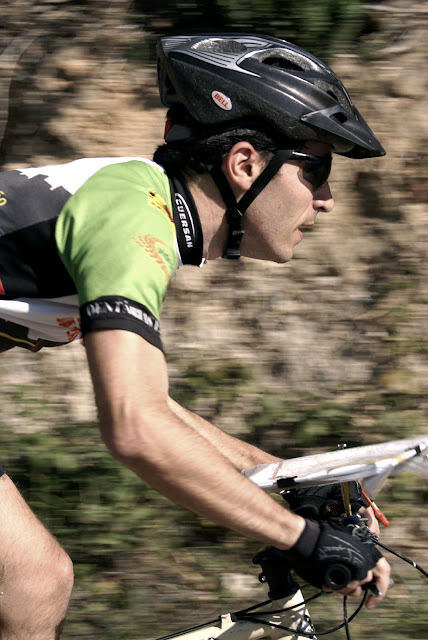 On a hot weekend, quite unusual for the season, an important Mountain Bike Orienteering Event took place in Bairrada. Spreading over its forests, climbing and descending its soft hills, 281 athletes rode their bikes trying to achieve the best result. At the end, Davide Machado and Karolina Mickeviciute were the winners.

The nice village of Barcouço, in the borough of Mealhada, was the stage for a weekend with plenty of Orienteering. The 5th Ori-BTT “Rota da Bairrada”, scoring for the Portugal Cup and for the Spanish League of Mountain Bike Orienteering and 1st round of the Iberian Championship were at stake. The great responsible for the organization of the competition, the Desportivo Atlético de Recardães team got from the municipalities of Mealhada and Águeda, the parishes from Barcouço, Cordinhã and Recardães, from Instituto Português do Desporto e Juventude and from FPO some of the essential and necessary support to carry out such an event.

There were 281 athletes in the competition, being 223 of them participating in the 19 competition classes and the others in the two open classes. Beyond all the greatest names of the Iberian Mountain Bike Orienteering, we have to highlight the presence of some of the best members of the French national team, such as Clément Souvray, Stéphane Toussaint, Matthieu Barthélémy, Yoann Garde and Madeleine Tirbois-Kammerer, as well as the Lithuanian Karolina Mickeviciute and the Slovakian Stanislava Fajtová and Hana Bajtosová, this last one being number 9 in the world ranking and having the titles of Sprint World Champion in 2008 e 2009 in her curriculum.

In fact, it was really Hana Bajtosová who, in a very demanding Long Distance race, both physically and technically, seized the opportunity to start the 5th Ori BTT “Rota da Bairrada” winning. Taking 1:21:17 to cover 21,6 km (14 control points ), Bajtosová sent the French athlete Madeleine Tirbois-Kammerer to the second place, leaving for the second stage with a comfortable advantage of 5:47 to manage.

In the second stage - a less demanding Middle Distance race in terms of physical effort, but particularly challenging and requiring the maximum concentration and quickness while taking decisions -, the athlete from Slovakia plumped so resoundingly, getting no further than the 9th place spending 1:24:41 and precisely nineteen minutes and a half more than the winner, the Spanish Monica Aguilera (Tierra Tragamé). Overall, at the end of the two stages, however, the victory in this 5th Ori BTT “Rota da Bairrada” would belong to Karolina Mickeviciute, adding to the fourth place in the inaugural race the second place in the decisive one. Among the Portuguese athletes, Rita Madaleno (ADFA) was the fastest during the first race and Susana Pontes (CPOC) showed her value in the second one ,although Tânia Covas Costa (.COM) was ,after overall results of both races, the best classified , occupying the 6thplace in the final classification.

Referring to the men’s category, Davide Machado (.COM) didn’t feel intimidated by the name of his opponents and proved that “at home, he is the master ”. After almost having guaranteed the achievement of the Trophy blowing away all opponents on the first day – covering 31,7 km in 1:30:47, against 1:37:41 of the second classified, the French Matthieu Barthélémy – the athlete from Póvoa de Lanhoso was once again the best in the decisive race. In fact, in spite of the strong resistence of his most direct opponents, Davide Machado taking 1:01:41 to cover the 15,0 km of the race, imposed himself to the French Matthieu Barthélémy and Yoann Garde, who repeated the second and third places of the inaugural stage, with the differences of 0:11 and 1:14, respectively.

“It’s amazing to see all these people competing here”

Davide Machado showed himself satisfied with his result, although technically his evalutation was not the best one: “It’s true that I came here to win and I made it. But I’m not totally satisfied because, both yesterday and today, I made some small mistakes. Due to the competitors, these small mistakes are very negative and could have revealed fatal, which didn’t happen as my opponents failed too”. Classifying the maps and courses “very similar in both days, very technical, very good”, the best actual Portuguese athlete says a last word to the organizers of the 5th Ori-BTT Rota da Bairrada: “A 5 stars organization. Congratulations!”

Karolina Mickeviciute was also a satisfied athlete with the result, although under valuated in a way her victory: “It’s just the start of the season and to be here means mainly new terrains and more experience”. Confessing having chosen Portugal during this time of the year because “the weather is excellent”, the athlete does not regret anything: “Everything was perfect, the maps, the courses, the way we were received. Comparatively to many international competitions, even to the big championships, this one is of the same level. And it’s fantastic to see all these people competing here. I would say that only in Czech Republic and Portugal one can find competitions with so many participants.” To end, a word about the future: “We will see if this victory is the sign of a good season. We are not professionals and this represents a sort of limitation in every aspect. If we have more time to train, the results will be better. Otherwise... we’ll see”.

The VIII MTBO Iberian Championship had its first two of four rounds and the Portuguese team was preponderant as usual. On the first day, the Portuguese reached 129 points against 86 of the Spanish athletes. On the second day of competitions, the supremacy was again for Portugal with 128 against 92 of Spain.

To Carlos Ferreira, one of the leaders of Desportivo Atlético de Recardães and the Competition Director, “it was worthwhile all the effort, all the work. We are few, but we managed to multiply ourselves and set a high level organization” Similar to what happened on the first day, the athletes congratulated again the organizers for the way how the decisive day went, what leaves that organizer particularly satisfied: “It’s the crowning of a set of experiences along the years, always with the goal of doing more and better.” Demanding courses, athletes’ safety and an improvement of communication and information were won bets of this V Ori-BTT “Rota da Bairrada”, showing that the national MTB-Orienteering is living good days. For Carlos Ferreira, the only thing missing was “the last 6 days of the map’s final revision, that were planned but that, because of an accident, didn’t take place. Due to that, I accept that there were some small dubious details on the second day’s map, but that did not in any way affect the competition level.” The last words are already about the 6th Ori-BTT “Rota da Bairrada”: “We will be integrated in the Cordinhã’s Wine Fair and we will have another new map. It will certainly be another great moment of MTB Orienteering for all this region.”

All the info in www.dar.pt/dar/

Posted by Joaquim Margarido at 6:14 am