Anna Serralonga: "We are climbing in to the results" 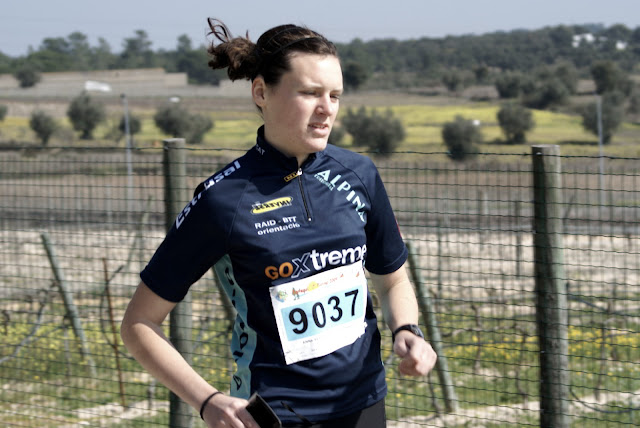 Anna Serralonga is a fighter. Orienteering is an important part of herself and she is today one of the safe values of the young and promising Spanish National team. Between the final of the Long Distance race at WOC in France and the recent passage by the Portugal O' Meeting, is an entire course of life that is projected in this interview, made of sincerity and confidence.


As in many other cases, also to yourself Orienteering is a family sport. Do you want to tell me how did it all begin and how important is this sport in your life?

Anna Serralonga (A. S.) - Everything started because of my father. He ran mountain races, marathons and also orienteering. My father introduced me and my brother to Orienteering when we were young, but we only used to run on regional races. Some years later, we asked him to run national races. Soon we got into the youth and junior Spanish team. We haven't stopped training nor competing since then and I hope to follow that way for a few years.

Besides Orienteering, what do you like doing the most?

A. S. - I like the mountain. My parents have an apartment in the Pyrenees and we usually do excursions. I like to climbing to the mountain tops or just to look for new lakes.

I'm putting you these issues in the International Women's Day. Being a woman and being orienteer, does it have a special meaning for you?

A. S. - I think that Orienteering is a sport that gives equal importance to men and women. That's why I'm really proud of being an orienteer.

You've been recently in Portugal, where you achieved a brilliant 10th place at the Portugal O' Meeting 2012. How do you evaluate the event in general and in particular your performances?

A. S. - This is the second time I run at POM and I think that it's a fabulous event. It's fantastic to have such a huge event in the peninsula. It's a big opportunity to compare to the best orienteers at the beginning of the season.

What special affection do you feel for Portugal?

A. S. - I've been running many times in Portugal and I have good memories from all of its competitions. Portugal has many different types of terrains and you are really near Spain, so I like going to Portugal! I also know a lot of portuguese orienteers because we use to meet at competitions, so running in Portugal is like running at home.

Although short, your experience as a competitor is marked by some beautiful moments, among them, surely, is the presence - along with Esther and Annabel - in the final of the Long Distance, at WOC 2011, in France. What memories do you keep from these moments, the Final and your 26th place?

A. S. - It was a big surprise to qualify for the Long Final. I had trained for it, but I wasn't sure I was capable to get into the final. I was really happy that day. Then I knew that the final would be really long for me. As it was my first Long Final, my goal was to finish the race and to enjoy it a lot. It was fantastic to end with a 26th place in such a difficult terrain.

Can you do even better this year in Switzerland?

A. S. - I've never run in Switzerland, but I know that the terrain will be really fast. I'm not a good runner, so I don't think that it will be easy for me to improve the 26th place. My goal this year is to run a good World University Championship in home ground. I'll also try to get into some final at WOC.

Portugal and Spain, two distinct realities, one sport. What approaches us and what separates us?

A. S. - I think that we are really similar countries. We have the same climate and really different type of terrains all over the Peninsula. Both are improving at the same time. I think that, step by step, we are climbing in to the results. Spain has some things to learn from you, for example organizing big events like Portugal O' Meeting.

Are we going to see you soon in Portugal?

A. S. - I'm from Barcelona, but this year I'm living in Madrid, so Portugal it's really near for me now. I like your terrains a lot, so I hope to come back soon!

Posted by Joaquim Margarido at 5:59 am