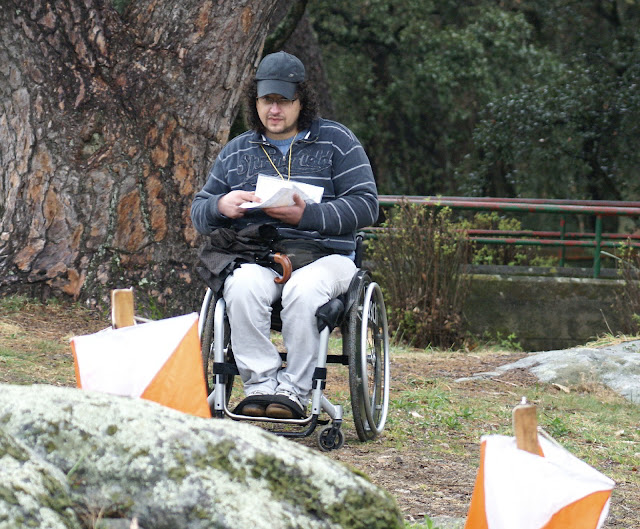 Five athletes from the Physical Medicine and Rehabilitation Service of Prelada Hospital, Oporto, will be at Plasencia, on 6th April, to compete in the first edition of the Spanish Trail Orienteering Championship. Perspective of an important and full of significance journey for the Adapted Sport in the Iberian Peninsula and particularly for Trail Orienteering.

The entries closed with the extraordinary number of 120 participants, to which we must add Adriano Rodrigues, Ana Paula Marques, Diana Coelho, Filipe Leite and Ricardo Pinto, all athletes representing the Physical Medicine and Rehabilitation Service of Prelada’s Hospital. Despite their reduced mobility and four of them moving in a wheelchair, the five Portuguese athletes will participate in the Open Class, the only class of competition.

The Portuguese Orienteering Blog met the big responsible for the introduction of Trail Orienteering in Spain which is the course setter of this Spanish Trail Orienteering Championship. To Roberto Munilla, the invitation of the Spanish Orienteering Federation to the Physical Medicine and Rehabilitation Service of Prelada’s Hospital concerns directly with "the friendship that binds me to Joaquim [Margarido] that made me, immediately, to think that this could be a rewarding experience for the athletes of the Hospital." But he goes further, admitting that "selfishly, I went to meet his biggest experience, since the orienteers and the organizers of Trail Orienteering competitions in Portugal possess valuable knowledge that can and should be shared with the Spanish orienteers."

The course will take the participants to meet the most beautiful places of the Los Pinos Park, offering the challenge of 15 control points and still one or two timed points. Roberto Munilla states that "the Los Pinos Park, being frequented by people with reduced mobility and having a varied topography and enough adequate for the practice of Trail Orienteering, gave to us the chance to draw challenges from many different levels, although the challenges to the level of Elite are not as numerous as it would be desirable. The fact that this is a small park with little depth of vision makes it practically impossible to use some technique (reference lines) and it’s sometimes difficult to find different points of observation to the group of flags. Roberto Munilla also notes that "the orienteers must adapt to a map that was updated within the philosophy of Foot Orienteering and there are some cases that the terrain features are not represented with sufficient accuracy, shape and dimensions as it should be desirable on Trail Orienteering.” And he leaves a warning: “The participants who aren’t well identified with the techniques and rules of Trail Orienteering may experience some difficulties to find the correct answers. The limitations presented before require, in some situations, to make a very precise reading of the terrain, with a reduced margin of observation."


"The beginning of a fruitful relationship"

Invited to comment the fact that there will be only one class of competition, closing the Championship, for now, to Paralympic class, Roberto Munilla returns the question: "Could it be a greater inclusion than to put in competition, in the same category, people with some degree of disability and those who do have not? That is, for me, the ultimate equality. Highlighting the fact that "the only differences in Trail Orienteering can only be established at the level of technical skills and never by the physical abilities”, Munilla particularizes the case of Plasencia’s event: "All the problems were designed taking in mind the handicaps of the orienteers with reduced mobility and the organization has provided an escort in order to assist in the movement of wheelchairs. No one will have reasons to complain of being in a situation of inferiority, comparing to the other participants."

With the number of 120 entries, the expectations at the participation level are fully met, surpassing even the most optimistic predictions. Roberto Munilla expects to see in this competition "an opportunity to deepen the knowledge about Trail Orienteering", but also a stimulus to "draw more ambitious goals, both personally and collectively." And it ends with the expression of a desire: "I hope that the Portuguese participants return satisfied with their performances and with our organization. I also hope to have drawn sufficiently difficult problems that motivate the Spanish orienteers to promote and practice Trail Orienteering." And as integration is a premise of this sport, Roberto Munilla hopes that “this should be the beginning of a fruitful relationship between Portugal and Spain, between orienteers with disabilities and those who have a little less."

Posted by Joaquim Margarido at 6:09 am