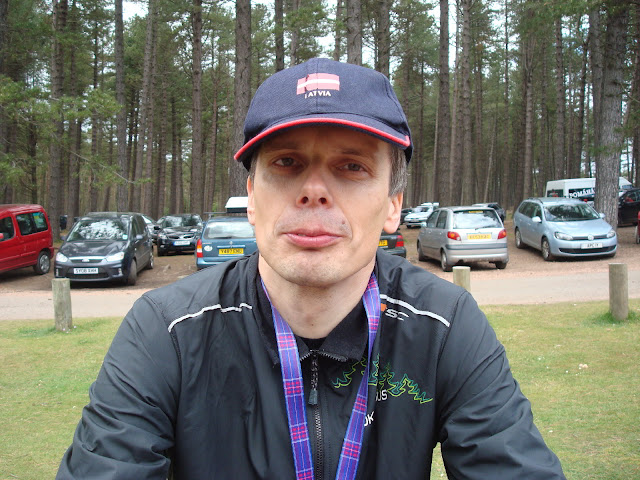 His name is Guntars Mankus, he is 41 years old, lives in Saldus, near Riga and he represented Latvia at the World Trail Orienteering Championships 2012, in Scotland. The Portuguese Orienteering Blog has talked to him and here is the result of a pleasant interview.


Is this your first time in a World Trail Orienteering Championships?

How did you start in Trail Orienteering?

And what about your performances here. Are you happy with your results?

G. M. - I’m not happy, definitely. I expected to get better results because I did a lot of competitions this year, once in Norway and twice in Sweden. The results there were better than here, so I can’t be very happy. But, of course, we have the terrains that we can say that are here completely different from Scandinavia.

G. M. – This is just my personal opinion, of course, but this was one of the worse competitions I’ve done. About TempO, I’ve nothing bad to say. TempO was the best part, for me. It was very challenging, the problems were very well chosen, we had a good visibility and it was quite equal for wheelchair users. I made a good result but I was very slow. I made only one mistake but I had the slowest time between the top competitors. But then, specially on first day, there were many places with a bunch of flags located on the same feature and it requires more the measuring than the map reading. Even if the Guidelines of the IOF say that the most important part should be the map reading. I think that the course setter nearly forgot it on the first day. On the second day, there were really more problems that required map reading and, from that point of view, the course was much more interesting. There were still very strange check points that I didn’t understand – I can remember, in the beginning, a depression with three check points and two thickets, that was something which I cannot understand - , but it was much better on second day, indeed.

How is it, doing Trail Orienteering in Latvia?

G. M. – We are a small group of competitors and we have about twenty regular participants in our races. Let’s say that almost 50% in Paralympic Class, a little bit more in the Open Class. We have ten to fifteen events per year and we have some local ranking, so there are regular activities. Not always but sometimes, of course, the maps and the check points are not perfect. In Latvia, not going anyone else outside, it’s hard to be prepared for high level events like the World or the European Championships. And that’s why I try to practice abroad, at least in one or two events, like I did this year.

Are you going to stay in Trail Orienteering or, after the injury, you’ll return to Foot-O and to Adventure Racing?

G. M. – We never know. It will depend on the other things I do in my life. It depends on my job, it depends on my family and it depends on the season. I’m still not satisfied with my performances in these last two World Championships. Last year, in France, I was in 4th position after the first day and I lost a lot on the second day. Also after these World Championships I’m not really satisfied. I’m still thinking that I’ll be in Trail Orienteering maybe one more year, searching to have some better results. But it’s like a never-ending process and then you come again (laughs).