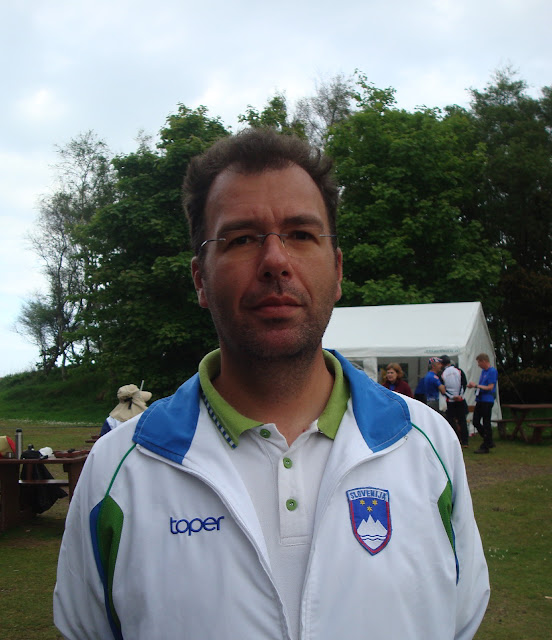 Krešo Keresteš is today's guest of Portuguese Orienteering Blog. He is a Cartographer, will be 42 this year and lives in Trzin, near Ljubljana (Slovenia). There you are the impressions of one of the biggest names in trail orienteering panorama, with five participations in WTOC and a gold medal in the Open Class at WTOC 2007, in Ukraine.


For how many years have you been doing trail orienteering?

Krešo Keresteš (K. K. ) – My first competition was the O-ringen in 1999, although I had already tried the O-ringen in 1992 in Sweden. I was very much involved in footO at that time, but the real impulse was my friend Niko Čižek, who is disabled and wanted to know what orienteering is. He was willing to try trail orienteering at a big event and we did some training before the O-ringen. So, we were very well prepared. He won in B Class. I was on 8th place in the Elite Class, so it was a good start. It took five years to organize the first trailO event in Slovenia and from then on I have been involved in the organization of trailO events every year.

And why did you start doing trail orienteering?

K. K. – Actually it was an opportunity to be more competitive, more than any other aspect. I also do foot orienteering, but I have better results in trail orienteering.

How is trail orienteering in Slovenia?

K. K. – Some people don't recognize trail orienteering as a sport, but it is officially a sport supported by the Slovenian Orienteering Federation, as any other orienteering discipline. Actually this year we are the only national team to compete at Championships, we don't have a foot orienteering nor a ski orienteering not even a mountain bike orienteering team, except for a junior footO team.

How many competitors do you have in front of you?

K. K. – In trail orienteering it becomes different year after year, but I could say around fifteen at the moment. Usually we compete alongside with Croatian and Italian athletes in our common CRO-ITA-SLO TrailO Cup. According to our work and results we have also some foreign competitors in our club competing in footO and also trailO.

In these particular World Championships, what was the best and the worst for you?

K. K. – The competition was interesting. I cannot say that my map reading was not perfect, but I did two mistakes on the second day. I can still hope to be between the best. I'm a little bit disappointed with those mistakes, because I worked hard before the Championships to get good results. It's normal that everyone here wants to be a World Champion, but I guess it will be hard to be between the Top 5. Some of the control points were very clear, but some others were very detailed. We could see that some features were not in the right position in the map and that would prejudice our answers. The best part was that I got more international experience, which was very important. As you know, I already won the Championship once, so I'll try harder next year.

K. K. – Both disciplines are important for trail orienteering to develop this sport. My motto is that only a second could be a difference between the winner and others and therefore I have to do anything to be the best. In the past I put many efforts to improve my results at timed controls and I think that this is also my strength. Therefore I can expect good results in tempO. My result at World TempO Trophy this year was very bad, but I have good reasons for that.

Portugal will organize ETOC in 2014. Do you intend to be on the competition?

K. K. – As a competitor, I have Finland in my mind at the moment, where WTOC 2013 will take place. It is true that I didn't compete at an ETOC yet, but Portugal could be a good start. I think that the organizers in Portugal already know that, for a good organization of trailO events, you need three things: willing people, good terrains and perfect maps. I am sure that the first two you already have, so now it is time to do the maps together with the course planners. This is the most important for trailO events.

For how many years more are we going to see you doing trail orienteering?

K. K. – That depends on how our Federation will support us, but I hope I'll be able to compete in the next years' Championships. I don’t do trailO just to compete at the Championships. I am organizing and course setting nine trailO events in Slovenia this year. Anyway, I will do my best to stay in the Slovenian national team as long as it will be possible.

Posted by Joaquim Margarido at 6:13 am