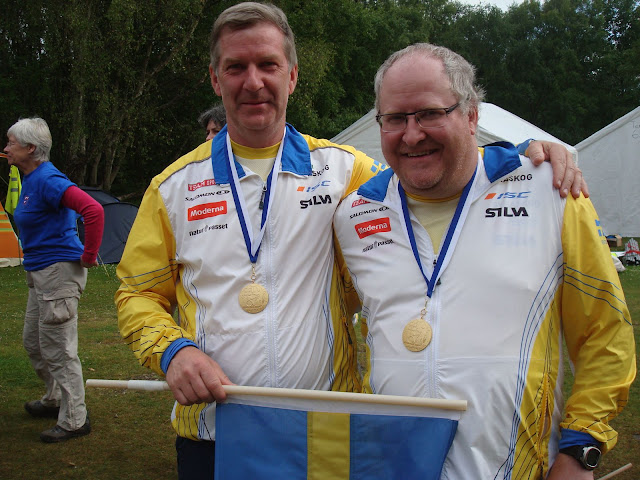 Mild weather and a green charming forest gave the tone for a second and decisive day of high quality races in the World Trail Orienteering Championships WTOC 2012. Ola Jansson and Stig Gerdtman showed why they are two of the world's best athletes in this as difficult as exciting sport and repeated the feat of 2010 in Trondheim (Norway), offering to Sweden the second "double" of the history.


Tentsmuir and it's delicious forest were the scene of the final round of the World Trail Orienteering Championships WTOC 2012. The race once again brought together the leading experts to a decisive course by offering them 23 challenging control points and two timed controls. The course took place on the map of Tentsmuir East and was distributed by two sections, the first in a distance of 1.75 km and the second with 0.5 km, to a maximum time of 135 minutes in the Open Class and 150 minutes in the Paralympic Class.

The map proved to be up to a competition of this importance and the participants were unanimous in praising the work of the course planner, Brian Parker, and the entire organizing team. The only repair arose from competitors in the Paralympic Class, mainly due to poor assistance in moving in a wheelchair, highlighting the disadvantages already obvious in relation to the Open Class. This situation would lead even to a formal protest from the Danish team, which would not be considered upheld.


The "tri" of Ola Jansson

In Open Class, the Ukrainian Vitaliy Kyrychenko was the great protagonist of the journey, reaching the full twenty-five correct answers and in the excellent time, in the sum of the two timed controls, of nine seconds. Having started this journey one point away from the trio Rusanen - Gerdtman - Ebright, Kyrychenko benefited the mismatch of his most direct rivals, having finished with the same points as Stig Gerdtman (Sweden). Due to Gerdtman's highest speed in the timed set of points on both days, the Swedish got the world title by the difference of 40.5 seconds. In third position it was possible to see another athlete from Ukraine, Sergiy Stoian, with one point less that the top two. In equality in terms of points with the third place, but with 8.5 more seconds in the timed controls, the German Christian Gieseler occupied the fourth position, while the British Ian Ditchfield and the Dutch Mark Heikoop, ranked in this order, occupied the remaining seats of honour.

In the Paralympic Class, Ola Jansson was again the most accurate, this time alongside the Finnish Pekka Seppä. Seppä turned out to be better in the timed controls, but the point of disadvantage brought from the opening day turned out to be decisive in the final schedule. Jansson thus becomes the first athlete in the history of the Championships to reach three gold medals, after Västeras (2004) and Trondheim (2010). World Champion in 2011, the Russian Dmitry Kucherenko had a disastrous entry in this last days of course, failing the two timed controls and definitely compromising their aspirations regarding the revalidation of the title. He would come to recover through the race, but the damage was done and the bronze medal didn't satisfy him for sure. World Champion in 2005 (Aichi, Japan), the Lithuanian Evaldas Butrimas was unable to take full advantage of the mismatch of their direct opponents and the best he could do was holding the fourth place brought from the previous day. With only two failures on the final day, the Croatian Ivica Bertol and the Finn Kari Pinola concluded its participation in the WTOC 2012 in 5th and 6th positions, respectively.

In the Team Competition, Finland reached a tasty triumph, repeating the result of the previous World Championships, in France, and with the same elements. Lauri Kontkanen, Antti Rusanen and Pekka Seppä staged an excellent race, finishing with a total of 72 points and 91 seconds. The second place fell to Sweden, with Stig Gerdtman, Ola Jansson and Marit Wiksell achieving the same number of points as the winners but with the 57.5 seconds more making all the difference. In third position, with one point less than their most direct opponents, ranked Croatia (Ivo Tilsjar, Ivica Bertol and Zdenko Horjan), thus reaching for the fifth consecutive time the podium of a World Championships.

Heard by Portuguese Orienteering Blog, Stig Gerdtman, the new World Champion, began to reveal that "it was very frustrating to have missed one of the two timed controls at the outset. From there, things got complicated and it was a tough day but now I'm very happy." As for the secret of this victory, the Swedish athlete confesses "not knowing for sure", but wishes to classify the terrains of this second day as "very interesting". As for the future, "going on this way" is all that Gerdtman has to say at the moment. Ola Jansson also proved to be delighted with his third world title, stating that the secret of the victory lay in the "great performance on this second day."

As for the Portuguese athletes, they failed again in the decisive day of course. Joaquim Margarido didn't go beyond the last position in the Open Class, dropping two places on the General and ending the World Championships on the 60th and penultimate place, just two points ahead of the Hungarian Tünde Forstreuter. Ricardo Pinto was better on this second day and the 10 points reached earned him into the 32nd place in the Paralympic Class. All in all, the athlete has risen one place from the previous day, ending his debut participation in 32nd place.

Total results, maps, solutions and other information at http://www.scottish-orienteering.org/wtoc2012

Posted by Joaquim Margarido at 12:13 pm