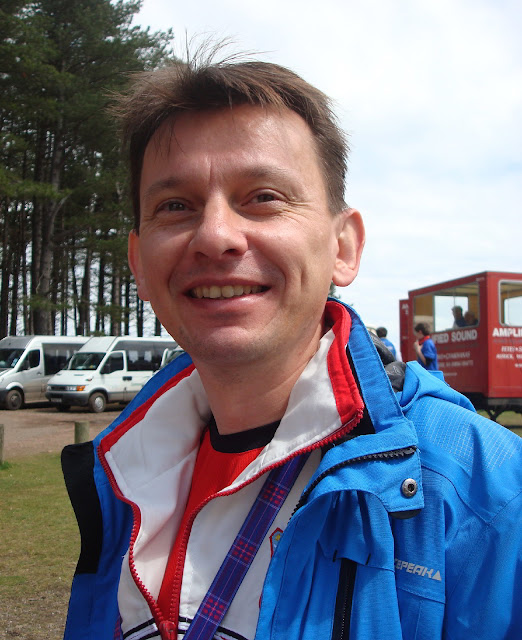 Zdenko Horjan, 41 years old, lives in Zagreb, Croatia and is a programmer. There you are, in brief, the ID card of someone who claims that will be in Trail-O “as long as I can see good enough and move or someone can push me in a wheelchair”.


I would like to start asking you for some good memories that you keep until now.

Zdenko Horjan (Z. H.) - The best memory is my first silver medal which I won at WTOC in Olomouc, Czech Republic. That was my first WTOC and nobody expected anything, so it was a big surprise. Then again, at WTOC in Trondheim, Norway, it was very exciting when we realised that our team could win a bronze medal. We didn't really expect to win a medal in Norway with all the Scandinavian teams present, but we did it. :-)

Can we talk about "evolution", when we look at the past ten years of Trail-O?

Z. H. - Yes, of course. Many things have changed: some rules, control settings... And some new interesting things came up, like TempO. In my opinion, most changes were good and some were not, but that is how evolution works. And I think this process is still going on, because TrailO is young enough and there is plenty of room for further development.

What impressions do you keep from these World Championships?

Z. H. - I think it was pretty hard, especially because the map wasn’t so perfect in some parts, but it was very interesting and nice tasks.

Z. H. - The worse thing in Trail Orienteering is when you have some complaints and you have to cancel a control point which affects the results. I don't like when that happens, but I know it is very difficult to make a perfect map with which everyone will be happy. And the best is to be here and meet so many nice people. And also the accommodation, where all the teams stayed at the same place and competitors were able to meet, share experiences or just hang out together after the competitions, was perfect!

How is it, to do Trail Orienteering in Croatia?

Z. H. - We are still a small group of people and therefore we have problems with organizing more TrailO events, but we cooperate and compete a lot with Slovenia and also with Italy, so this way we are improving and that is how we managed to get some good results at international level. We’re growing slowly, but we’re on the good way.

How can we get more people doing Trail Orienteering?

Z. H. - I think that for those who know Orienteering already - and I’m talking mainly about Foot Orienteering -, they think that Trail Orienteering is a little bit boring, there is not enough adrenalin. Maybe TempO is good for them. And for people from outside Orienteering, it’s a little bit hard to explain them the rules, how to read maps, all the details and the tricks of Trail-O. So it can be really difficult to start to enjoy the sport and to have their attention, but we should keep trying and not making too difficult tasks for the beginners at the competitions.

And you, how did you start?

Z. H. - I was in Foot Orienteering since I was 19 years old, but I was always more interested in maps and less in running, so when I saw the first TrailO demonstration in Croatia in 2004, I immediately liked it a lot and I am in TrailO ever since then.

In July we'll have a new President at IOF. Would you like to leave him a message?

Z. H. - Well, I know FootO has much longer history, but it would be very nice if IOF (at all levels, from President down to all national federations) would treat all four disciplines at least equally, and even nicer if you could give younger orienteering disciplines a little bit of extra care and help them to develop, instead of treating them as unwanted child.

What would you say to the people to come and try Trail Orienteering?

Z. H. - Come and try. At the beginning it could be a little bit hard to get to know the sport, but later I’m sure you’ll enjoy.

Posted by Joaquim Margarido at 1:30 pm