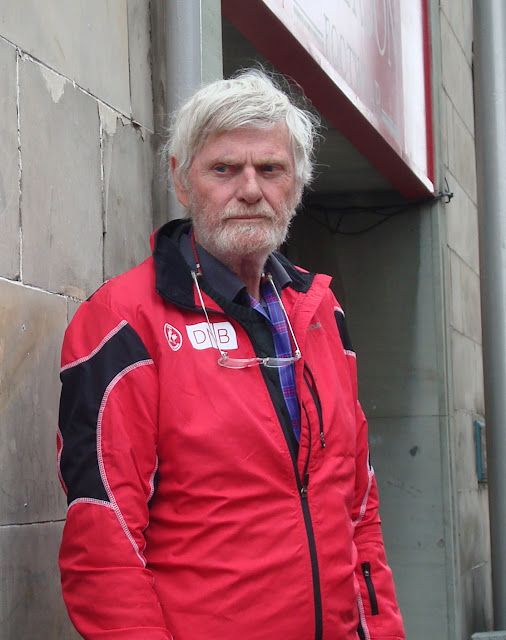 The Portuguese Orienteering Blog invited Ole-Johan Waaler today to say something about his experience and feelings in trail orienteering. Born in 1942 and living in Porsgrunn, he shared with us his ideas about our sport.


When we take a look at the history of the participation of Norway in the World Trail Orienteering Championships, we can see that, since 2004, the name Waaler is on it. Ole-Johan, Lars Jakob, Kjetil... Please, tell me what does it mean to the Waaler family, to belong to the Trail Orienteering family?

Ole-Johan Waaler (O.-J. W.) - Being involved in the trail-o-family means a lot to us from Waaler family. We participate in all competitions in Norway and we're also frequent guests at competitions in Sweden. This has given us many good friends in both countries. And we have been fortunate enough to be participants or team leaders in all international championships.

How did you start in Trail Orienteering?

O.-J. W. - I tried trail-o for the first time at a Come-and-try at the O-ringen in 1990. I did quite well and thought it was very fun. But we were very active in the foot-o at that time. Next attempt was in Norwegian O-festival in 2002. This year I participated in another competition too. In 2003, I tried myself in several competitions and Lars also tried. The following year we participated full time and also Kjetil was with us.

Four participations until now, a third place in 2007, in Ukraine (Open Class) and – I'm sure – a bunch of beautiful stories to tell. Can you mention a couple of impressive notes about your presences in the WTOC until now?

O.-J. W. - WTOC 2007 is, of course, the best memory I save from these championships. I was in 7th place after the first day and when I saw the list of those that lay before me and behind, the goal was to keep that place. And it was very exciting, most of the best ones had missed a lot. But even worse was that the scoreboard was picked down, they had used the wrong program. But after a very long wait, it was clear, it was bronze. Another great memory is when Kjetil, Lars and I took a silver medal in the team competition in the ETOC in Latvia in 2008. On the same year was organized Trail-o for teams in the Tiomila. There, we won with the same team. And since it was only held once, we are the only winners of the Tiomila Trail Orienteering.

Talking about WTOC 2012, I can see that Norway was away, for the first time, from the podiums. How did you see your results?

O.-J. W. - There are many countries with many good players so you must be skilled and lucky in both days. I see that our athletes missed the records where there were several flags placed in the same detail. In Scandinavia, we have moved completely away from such items, one of the reasons may be that we have little training on these tasks.

O.-J. W. - On the good side, I will mention the accommodation, organization and terrain. Besides, TempO was good and TrailO on the second day was good too. But, on the first day, TrailO could almost be done without map reading and it was a shame as it was a great terrain that should have been better used. And also the Guidelines: trail orienteering competitions demand skills of map reading and terrain interpretation at all levels.

O.-J. W. - TrailO will never be a great sport, but it is quite clear that we should be many more. There are many good map readers that finished with foot-o still very young and that could be good in Trail Orienteering. We must make an effort to get more of these. This is the Elite Level. For anyone who does not have this background and must start at the very bottom when it comes to map reading, we have several classes at the simpler level. Here it might work better with different organizations that have a disability.

In July, we'll have a new President in the International Orienteering Federation. Would you like to leave a message for him?

O.-J. W. - The British candidate was an assistant under WTOC and spoke warmly of TrailO. To him I say: Keep it up. The Danish candidate must make a greater effort if he is elected. The Danes would, in fact, not have the TrailO in the union. TrailO in Denmark is organized by the Danish handicap league. To him, I would say: Make sure the TrailO will be treated in par with FootO, MTBO and SkiO.

O.-J. W. - Both. I think both are equally fun, even if there are different challenges. In the long run, I believe that countries can have different layers in TrailO and TempO. Even now, I see that some have better talent for TempO. But do not make the tasks of the TempO too difficult, TempO should be done at full speed.

Portugal, ETOC 2014. What kind of event can we expect, knowing that Portugal, at the moment, has no experience in Trail Orienteering? Are you curious?

O.-J. W. - I have been at the Portugal O' Meeting six times, in different parts of Portugal. And every time I come home and I said to the others: “It would be fun to have TrailO there”. I have only good experiences at the Portugal O' Meeting, good organizations, good terrains and good maps. I'm sure this ETOC 2014 will be a positive experience for the participants. I will do my best to be one of the six from Norway, but age does not play on my side. Hopefully I can be a team leader, or just a supporter.

Posted by Joaquim Margarido at 5:26 pm