Roberto Munilla: "The best is always what you can learn and improve about trail orienteering" 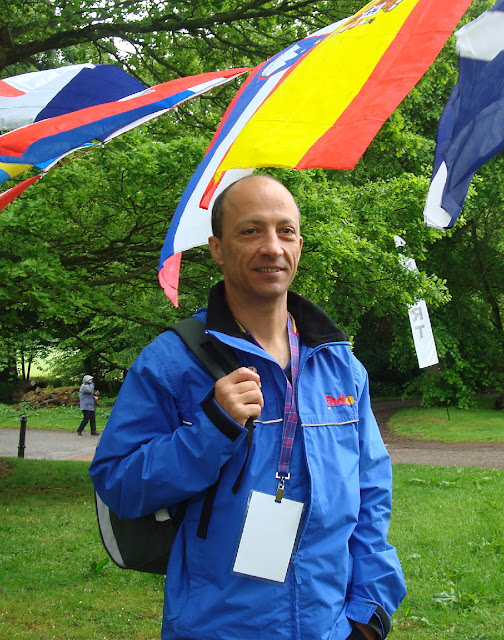 Our invited today is Roberto Munilla Velasco and he's from Spain. Lives in Pastriz (Zaragoza), is a Militar and competed in Dundee, after his first experience in WTOC in France, last year.

Roberto Munilla (R. M. ) - In the year of 2010 I helped as a volunteer in several associations for disabled people. Mario Vidal (FEDO's cartographer) knew it and he asked me to develop TrailO from FEDO, a modality which was strange to me at that moment. For various reasons, I thought that I wasn't the right person for this exciting project, but as Mario continued insisting, at the end I accepted that responsibility several months later, thinking of the great opportunity that could be opened to the Spanish disabled people who wish to practice this sport their whole life.

This is the second time that you compete in a World Trail Orienteering Championships. Since the last year in France until now, in Scotland, what evaluation can you do?

R. M. - In WTOC 2012, it was much more important to read the contours very attentively, with high precision, so the most important part of the races were played in very small details. We could also see some similar controls in France, but not as numerous as we could see here.

So, technically speaking, these World Championships were more demanding? Is that what you mean?

R. M. - Not exactly. It was almost the same, although the controls were different. The difficulty, the complexity, was maximum, but with different types of controls. I think that both World Championships were very demanding, very equal in this chapter.

Personally, were your results what you expected?

R. M. - I expected to do a little bit better than last year, once we don't have the chance to do trainings and races in Spain. But, after what I did on the first day, it was clear to me that it would be very difficult to do something better. Since last year, my level remains the same and I must be resigned by the same position.

After all you could see here and the experiences that this event provided to you, please tell me two or three things that would be useful to continue your job in TrailO in Spain.

R. M. - I could see that the work to organize an event like that should worry about the smaller details. They are small, in fact, but sometimes I think they are more important and they can affect the normal deployment of a race. If you don't have the chance to get an alternative way to find the solution for a problem, then it's a matter of luck. This is not Trail Orienteering. Trail Orienteering is something more complex and diversified than this. All the work around the organization should be carefully managed, so the athlete can feel safe during the course and, if there is an error, that is his fault and not because of a problem like the cartography, map reading, poorer viewing controls for the disabled competitors or something like that. I've also learned that if the quarantine is needed, it is more convenient to place it after the finish.

Did you feel that for yourself?

R. M. - A couple of times, yes. I cannot say that it was due to my insufficient knowledge and experience, or because there was some little errors or changes on the map. I think that we should have some better maps... Well, I don't know... I mean the map reading here, for example, was a little shorter than what would be normal to expect in a World Championships.

The best and the worst of the Championships?

R. M. - The best is always what you can learn and improve about Trail Orienteering. But also the relationship between all the competitors that we can see in an event like this. The worst part, I think that we can relate it with the problems that this organization had since April, with the storm, the felled trees that affected all the plans and the last minute changes in the maps and the courses. And, of course, a very small organizing team and, despite its goodwill, not very mature, showing some inadequacies in relation to several aspects.

R. M. - I think that they are two complementary disciplines. To get a good score in TrailO it is essential to answer correctly the timed controls, and the best training could be practicing TempO.
On the other hand, to be a good competitor of TempO, I think that you need to have an agile, lucid and very fast mind, more typical of the younger people.

I know you are starting now with TrailO in Spain and last April you held the first edition of the Spanish Trail Orienteering Championships. Can you tell me about this experience and what projects are opening to the future?

R. M. - When the realization of a event basically depends on a little experienced person and the facilities are few, the course to its end is long and hard. In spite of this, the 1st Spanish TrailO Championships were an important way of diffusion, and I would like it to wake up the interest to organize other courses in their cities, in each one of the participants. In fact, we have already started to organize the 2nd Spanish TrailO Championships. Afterwards, there have been a couple of collaborations with Portugal. One in particular is with Joaquim Margarido, implemented with success in Zaragoza, which is Adapted Orienteering to people with mental disability. The second could be the joint organization between both Federations of a course of TrailO during the Iberian Championships.

How can we get more people to do Trail Orienteering?

R. M. - With much dedication and patience we can work in two directions: from the Federation, helping, in the organization, the clubs interested in TrailO races, during other events in their calendar. And also proposing the realization of chats and courses where disabled people (rehabilitation centres, associations or hospitals) are assembled.

Portugal will organize the ETOC in 2014. What kind of opportunity does this represent to Spain? Are we going to see a strong Spanish team, in both classes, in Portugal?

R. M. - I hope it could be a turning point for TrailO in Spain, where we can experience the true complexity and difficulty of a TrailO course that will encourage them to continue participating in other events. I don't know what will be the level of the Spanish participants. It depends on the possibilities to train that there is in Spain before the ETOC.

For how much longer do you intend to keep on doing Trail Orienteering?

R. M. - Inside the FEDO my time is over, because since the last Spanish Championships and due to personal reasons, I have been resigned from my position in the Federation. My collaboration with the Zaragoza associations, promoting adapted orienteering, I desire that it could be much longer.

Posted by Joaquim Margarido at 6:21 am