Edgars Bertuks: "I am my own idol" 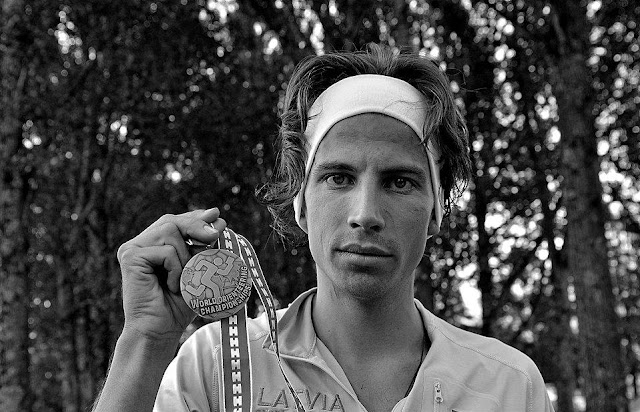 When, at the end of the year, Jan Kobach's “World of O” launches a new edition of "The Orienteering Achievement of ...", Edgars Bertuks – I am sure! - will be the leading candidate to the victory. Two medals, one of them of gold, at the recent WOC 2012, did fall the spotlights on this Latvian born in Aluksne, on the first day of 1985. Here and now he speaks to the Portuguese Orienteering Blog, telling us a little about himself and this dream that he's living.

What a remarkable feat, your gold medal in the final of the Middle Distance of the
World Championships in Lausanne. Allow me to congratulate you and, now, let me ask if this title was in your plans?

Edgars Bertuks (E. B.) - Thanks! That was a truly great moment. Winning a gold medal at WOC has always been one of my biggest dreams. Also during times when it seemed to be impossible, this dream gave me that kick needed to move forward, not to give up, to try one more time. If we look at it more technically, I had my big goal set to WOC 2013 and gold medal in long distance and therefore the task for this year was to repeat my personal best which was 9th place during WOC 2008.

I am sure that you analyzed dozens of times your race. Where was the secret of your victory?
Was there one truly decisive moment during the course?

E. B. - There are no secrets behind victory. I can tell everyone small details of my performance, but I am pretty sure it won't work for any other runner. In order to win one has to be himself. For me it was all about staying focused, being present, being aware - "being here and now". Keeping my head up and doing what I know best. In details - I perceived the whole course as one route and only when I got out on the field I switched into my running mode. I had made an agreement with myself that I would "give it all" when it came to running that day. That was a good deal!

A few months ago, I interviewed Thierry Gueorgiou where he said that "it is in the winter that we
win the medals of the summer." How to prepare a gold medal?

E. B. - I can only agree with Thierry here. I started my preparation for this season by October 2011. Also it wasn't smooth at all since I could run very little cause of my heel injury from France. So I used swimming and other cross training a lot. At the beginning of this year I went to Portugal without knowing whether I would be able to do enough running there, but my leg got better and I continued with TuMe camp in Spain and spent the rest of the winter in the UK. "It is in the winter that we win the medals of the summer" has also become one of my favorite mottos. Back here in Riga I had a 800 m long travel where I have repeated this to myself hundreds of times.

What does this title mean to you?

E. B. - For me it's another proof that everything is possible as long as I am confident and truly believe in myself. This achievement also shows to other Latvian orienteers (specially the young ones) that it's worth it, that one day they will be in my place, even if we don't have all the benefits that "great" orienteering nations have. I have said this a lot, but it can never be too much, I guess - I truly hope we will get all the possible benefits out of this victory to make orienteering an even more popular sport in Latvia and make it more familiar for masses.

Looking at the gold medal in the Middle Distance, we almost forget the 3rd place in the Long
Distance final. Please, tell me something about this other spectacular performance.

E. B. - For me this second medal has almost the same importance as a golden one, because after winning gold I was in big doubt whether I would be able to repeat or even get close to medals again next year (yeah, I was already feeling that my job there was done), so winning bronze in long distance I proved to everyone, and most important - to myself, that it wasn't just one lucky occasion.

As an athlete, surely, Edgars Bertuks is a name with firmed credits in Orienteering. And as a
person? How do you define yourself? What are the things that you appreciate the most in life? And those you hate the most?

E. B. - There are few things I strongly believe in. Most important would be - “what you give is what you get". So I always keep it in mind. That doesn't mean that I haven't experienced any fatal moments in my life, but most of the time I know why those are happening to me. My family is the most important part of my life so I appreciate everything they have done for me and every moment I am able to spend with them. I keep myself clear of negative emotions - like hate. I try to get rid of them in less than twenty seconds. That’s a great ability I have learned from my fiancé Kristine.
Are you superstitious? During the races, do you keep some amulet?

E. B. - Not really. There are a few rituals (kind of my own meditations) I keep on to and I have a necklace with Baltic sea amber, but I don't credit it with any super powers.

Are there any athletes that you see as your idols of the moment?

E. B. - I have had few during my career, but what I have also understood is that as long as I have idols I can only take second place. This might sound arrogant, but I am my own idol.
Being World Champion greatly increases your responsibilities. What are your projects for the
future?

E. B. - For this year I had planned to take part at WC final, but my plans have changed since I feel that I need to give my body some rest from running. I will go to Vuokatti for a short WOC 2013 training camp and take part in the Finnish championships straight after. And of course I will meet both my coaches and my great club mates. I will prepare and try to qualify for European XC Championships in late autumn. In longer terms - my BIG goal hasn't lost importance so I will do my best to run for long distance gold in Vuokatti.

And what about the future of Orienteering? Is our sport walking in the right direction?

E. B. - I have paid my attention to this question only lately and I am happy that WOC won't be split in two parts. Other changes are OK for me, as long as there is a place for real forest orienteering. At the same time, I am aware that I will have to focus on sprint type orienteering in the future because it will only become more popular. If I had the power to decide, I would also bring big orienteering events to countries like Latvia in order to make it more and more recognizable to more and more people. The thing is that we don't have so much resources to organize truly top level competitions and any help from big Orienteering nations would be much appreciated.

Posted by Joaquim Margarido at 6:27 am