Fruzsina Biró: "The important thing in Trail Orienteering is the handicapped people" 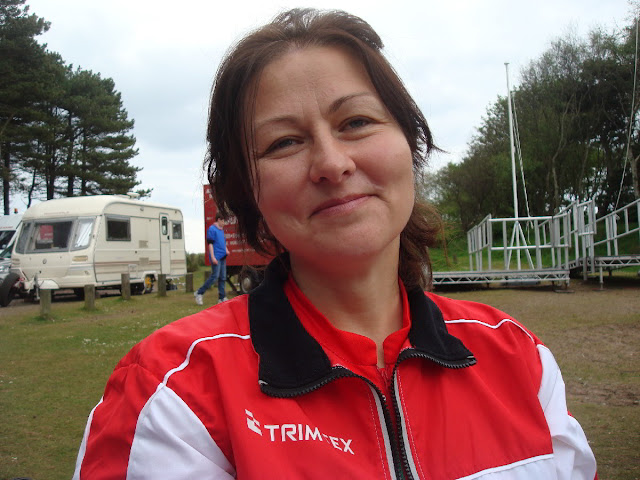 Returning after one (always) short summer break, the Portuguese Orienteering Blog comes again to the subject of Trail Orienteering and to the interviews carried out during the WTOC 2012, in Scotland. Our invited today is Fruzsina Biró, a 38 year old hungarian, Psychologist, who lives in Nagykovácsi. Started in Trail-O in 2007, she took her best result in Trondheim, at the WTOC 2010, with a 5th position in the Paralympic Class. Last year, in France, she was 6th place in the Open Class but this year the results weren't exactly what she expected. This and many more to read right now.

How did you start in TrailO and why?

Fruzsina Biró (F. B.) - My family is one of the most well-known orienteering families in Hungary (there are some World Championship places and many national championships), so I started in Foot Orienteering early, when I was 4 years old. Orienteering is just a hobby for me, but an important hobby. Unfortunately six years ago I became ill (joint disease) and I had to stop running. In those years, some trailO events began to be organized in Hungary (thanks to Julia Grant and László Nemesházi) and I tried it… TrailO is a good game for me, maybe a little bit more than a hobby. For some years, it was the only sporting facilities and connection with the orienteering for me. I'm very lucky because I could start running again last year, but TrailO is still my favourite.

During these years, what are your best memories? And the worst?

F. B. - My most beautiful memory is my first mistake-free competition in Trondheim on the first day of WTOC 2010 (and then the 5th place). There were good moments with the Hungarian team. And the WTOC 2009 in Hungary was very exciting because in the first day of competition was my pregnancy due date and in the morning of the 2nd day my daughter was born.

F. B. – We were a four members team and it was very good for me, because I often must compete as the only Hungarian. The most fantastic thing that we saw here in Scotland, was the behaviour about handicapped people (for example the public transport in Dundee). Organisers were very kind and helpful.

F. B. – The courses were very difficult for me and specially for the beginners of the Hungarian team. I had never been in Great Britain for a TrailO event, so all of this, the terrains and the courses, were very strange for me. But I must say I enjoyed the courses a lot. Sometimes I had problems with the map, mainly on the first day, but usually I am looking for the reasons myself. I spent all the time we had, I concentrated a lot but I wasn't good enough in this competition. I'm a little bit sad with my results, I have to do more exercise (laughs). I did not like the Model Event because it was not similar or useful enough for the competitions.

F. B. - I love TempO although I'm not fast enough. I think TempO is the key for the integration of new members - especially young people - into this sport.

How is TrailO doing in Hungary?

F. B. – TrailO in Hungary is on a turning point. We've organized the WTOC in 2009, but the first members who organized this big event are retired and they're no longer with us. Now we try to start again or continue, we try to involve some other people, many people... we try! We have a little group of paralympic competitors, a little more orienteers and about ten events per year. There were 70 participants on the TrailO Championship this year - I think we are on the right track.

How can we do that? Finding people from Foot Orienteering?

We'll have ETOC 2014 in Portugal – I should say that you've participated this year in the Portugal O' Meeting's TrailO course – and perhaps you can tell me what you expect from our event?

F. B. - Orienteering and nice weather instead of hungarian winter - that was a good combination, I loved it. The TrailO course was great too, although I was not tuned (I wrote about it on my blog: http://www.tajbingo.blogspot.hu/2012/04/pom-trailo-en.html). My plan includes the ETOC 2014 in Portugal…

For how long are we going to see you doing Trail-O?

Posted by Joaquim Margarido at 12:56 pm