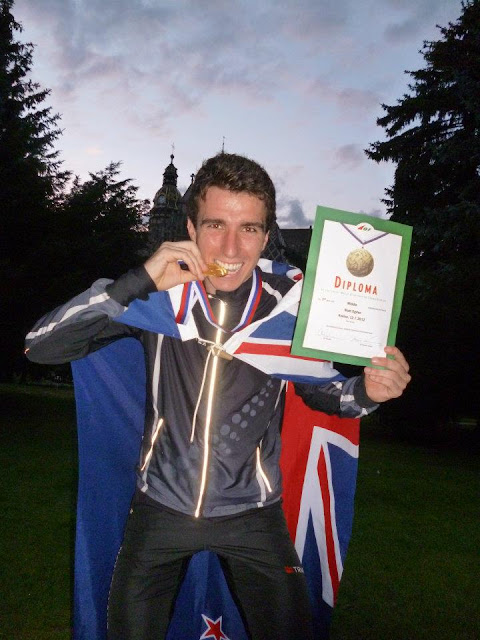 Thursday, July the 12th 2012. In the forests of Izra, Matt Ogden gave to New Zealand its first gold medal in a Junior World Orienteering Championship ever. Two months later, he is the Portuguese Orienteering Blog's guest of honour. Still living in a state of euphoria, here he's willing to share memories, dreams and projects in a simple, direct way, enabling to know better the athlete and person.


A historical result, your first place at JWOC's Middle Distance. Was the gold medal in your plans?

Matt Ogden (M. O.) - Yes, a very historical result! It was New Zealand’s first ever medal and the first even non-European male medal. Those two historical facts alone convinced me that a gold medal was close to impossible. I did dream of being a World Champion though but that was buried deep within my thoughts and only ever surfaced when training got tough and I needed a source of motivation. So when I crossed that finish line, it was a pretty surreal feeling.

How did you start in Orienteering?

M. O. - I was first introduced to Orienteering when I was 10 years old at primary school. My mate and training partner, Gene Beveridge, asked if I would be interested in giving orienteering a go. I then did it throughout high school. Gene’s dad took us to all the schools events, travelling the length of the country where we competed at all the schools events. My first ever club nationals I picked up the middle distance title and I also won the national secondary schools title in my final year of high school. This kick started my orienteering career and when I experienced Europe into 2010 there was no going back.

Returning to Slovakia and to JWOC, how did you prepare for the gold medal?

M. O. - My preparations began two years ago, when I competed at my first JWOC in Denmark. I placed 70th in the Sprint, 84th in the Long and qualified in the Middle to eventually get a 46th place. One of my strongest memories from that A-final was being passed by Gustav Bergmann. It was then that I would realise the orienteering speed required to be near the top of field. After a solid training period I was back in action last year in Poland where I had a good race in the Middle Distance to finish 15th (30th and 21st in the Long and Sprint too). Following JWOC in Poland, I did some travelling and competed in the Croatia 5-day and OOCup. The OOCup would have to be the most fun I have ever had orienteering. The event was amazingly well organised and the terrain was just out of this world! It just so happened that the Middle final this year in Slovakia was held in quite similar terrain (maybe not such a coincidence). This year I made sure that I was running at 100% at JWOC. I arrived in Slovakia three weeks prior to the competition so that I could fully adapt to the climate and terrain while also recovering from jet lag. I ran numerous trainings with two Australians, I ate well and I was injury free so when I was on the start line of the sprint I was 100% prepared.

What are the strongest images you keep from that day? Did you wake up in the morning saying to yourself “let's go for gold”?

M. O. - I don’t think any orienteer ever wakes up and says “let’s go for gold”. That is the beauty of Orienteering. The winner is the athlete who can forget about the result and focus entirely on their technique. I had slept well after the night before the final and I was calm and relaxed going into the race. For every race at JWOC I had a set routine which I once again executed before the race. One emotion I did not expect to feel was sad. This was going to be my last individual JWOC race, but this also made me very excited as I knew it was my last chance to do something special as a junior. All the hard work, all the pain, all the training came flooding to me just before the race. A customary hi –five with my coach and I was heading off to the start. The strongest image from that day was definitely the NZ support coming into the arena mid-course and at the end. There support was unparalleled, and I believe, made that crucial difference in the last part of the course. The best feeling though would have to be collapsing across the finish line knowing that I had given everything; physically, technically and mentally. I knew that I had done all that I could to have the ‘perfect race’. Then when that was coupled with the commentary “Matt Ogden has taken the lead” there is only one word that can describe the feeling, Euphoria! And that has been the feeling ever since I won the gold.

In which way can this title be important for Orienteering in New Zealand?

M. O. - I think I have shown to all the juniors in New Zealand (and Australia) that being based in Oceania is not necessarily a bad thing. We have some fantastic terrain and with the right attitude and dedication anything is possible. Hopefully my success will inspire a new breed of New Zealand orienteer’s who will take the orienteering world by storm. I have done a lot of coaching with the New Zealand juniors and I definitely think that there are some real talents coming through. The saddest thing about orienteering in New Zealand is its appearance in the media and public eyes. It is seen as an ‘activity’ that you don’t really need to be skilled at. I think by winning a world champs, people have begun to realise the true essence of orienteering and how difficult it actually is. Hopefully because of this, orienteering can grow to new heights in New Zealand and become a nationally recognised sport (maybe a bit hopeful :P).

Tell me a little bit about you. What kind of person is Matt Ogden?

M. O. - Currently I am studying Mechanical Engineering at the University of Auckland. I live about 40 minutes from the university so I spend a lot of my time driving each day. As much as 2hrs! So I think if I ever retire from Orienteering I would make an excellent limousine or taxi driver. I love food, any kind, as long as there is lots of it. I also really enjoying down time, sitting on the couch playing my ps3, watching a movie or laughing at Family Guy! I don’t really detest too many things as I believe it is best to have a positive outlook on as many things as possible! In the future I hope to move to Sweden; well it is becoming more of a reality. In 2013 I will finish my studying, so I will be a 21 year old qualified mechanical Engineer living the dream in Europe (that is what I hope to do at least!).

Do you have an idol in Orienteering? What does he (or she) have that you don't?

M. O. - I admire all top orienteer’s like Gueorgiou, Hubmann and Lundanes. But I don’t really have an idol. I liked what Edgars said about being your own Idol; I thought it was true in many ways.

Next year, the World Cup will start in your country. What are your chances of a good result, playing at home?

M. O. - It is really nice to have the World Cup in New Zealand. It is time for the Europeans to suffer at the hands of jet lag and travel fatigue! This will be my first senior race which I am targeting so I am not expecting much when it comes to results. My focus once again will be on the technical and physical performances. I think that the older athletes who have had experience at the senior level will do really well, especially Ross Morrison, who is somewhat unbeatable in his home terrain (the location of the third and final world cup race).

Talking about her goals, Lizzie Ingham, athlete of the month of September 2012 of the International Orienteering Federation, intends “to be the first Kiwi on the podium at WOC”. Are you going to break her dream?

M. O. - Haha. I don’t really want to break someone’s dream. My dream was to be a Junior World Champion and somehow it was realised. It will take some months for the high of winning JWOC to settle and for me to re-focus and begin to dream the biggest one of all, but I imagine it will be something like-to be the kiwi, first on the podium at WOC. But like JWOC it will not be my goal. Dreams are merely a source of motivation for me, my real goals are things that I control. The one consistent goal I have had throughout my orienteering career is to always be improving my technique so I will spend the next few years really focusing on that. I have never experienced a WOC so I have no idea what to expect, but I have heard that it is a million times harder than any JWOC. One person, or group, that could break Lizzie's dream though is IOF. One reason that New Zealand has grown so strong over the past few years is our WOC athletes returning home and improving the level of competition. If the changes to WOC are made then we will have less runners competing at WOC, which will be detrimental for Orienteering in New Zealand. In my opinion they looked at the problem the wrong way; Instead of “how can we change WOC to make it more TV friendly?” they should have really looked at “how can we change TV to make WOC more of a spectator sport”.