Eva Jurenikova: "I want to go forward in this coaching work" 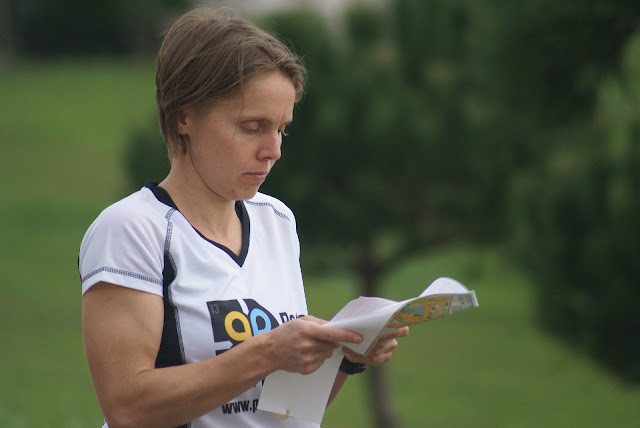 Eva Jurenikova was recently in Portugal and the Portuguese Orienteering Blog found her at Oporto City Park, doing... Trail Orienteering. In this Interview, she describes the last few months, speaks of the new challenges ahead the Halden SK and projects the next season. And she also talks about Portugal and Trail-O.

What are your best memories, six months later, of the European Orienteering Championships 2012, where you were the Middle and Long Distances' course setter?

Eva Jurenikova [E. J.] - What I remember the most is the cooperation with various people, when we were preparing the TV production. Tom Hollowell, Jan Kocbach and some other guys worked hard to make it happen. Collaborating with the TV director Karel Jonak and realizing what you can do for a good TV coverage without compromising orienteering, was motivating. But the TV production was just a part of my EOC work, I was involved in many other things.

Was it an extra-challenge for you, as a course setter. It would be easier without the TV?

E. J. - Until February, I was not sure if there would be TV or not [from the middle distance]. I had two or three little bit different course alternatives, but the main concept of the course was set. I didn't have to make big changes because of TV. They used many kilometres of TV cables. I only adjusted a few controls after being in the forest with Karel Jonak, the TV director, in the autumn 2011.

How important was for you to be a course setter in this event?

E. J. - It was important because of the experience. It might help me in the future to get some other tasks or some other jobs connected to orienteering. But that wasn't what I was thinking before. I had too much terrain knowledge to run the competitions anyway so I said “OK, it will be fun to be on the other side”.

One month later and there you are, in Lausanne, competing in the World Orientering Championships. How did you find the WOC, this year?

E. J. - After all, there are a lot of positive feelings about the WOC. In May, just before the European Championships, I was not sure if I would be participating in the World Championships because I was not training properly for a couple of months. I am pleased that I managed to get there and, at least, to be in the best shape of the season. I felt that, in the Long Distance, I managed to get the maximum out of me.

So, you are happy with your result?

E. J. - I was fourth last year, I was sixth this year but some of my competitors were missing in 2011. Just looking blindly on the results… they might not be telling the whole truth. Technically, I had a better performance this year than the last year. So, I am very pleased with that.

What did you feel seeing Tomás [Dlabaja] and the two Jan [Sedivy and Prochazka] winning the historic gold medal on the WOC's Relay?

E. J. - I could feel tears coming to my eyes when Jan Prochazka was on the way to the finish, it was a great thing to see. They had been fighting for this for quite a long time.

Did you expect such result?

E. J. - To expect... (laughs) If you see the Relay races, the margins are so small. I think the guys believed that it could happen. Maybe in the previous years, some parts of their race were very good and they could feel that they could be on top, but some small things didn't work. This year, everything worked out greatly. It was cool!

In a couple of days, you'll be travelling to Norway, to take the place of coach of one of the biggest orienteering teams of the world, Halden SK. What does being the coach of such a great club mean to you?

E. J. - I know it's a big challenge and I've been thinking a lot about it. I feel that I'm ready for that, so I made the decision. In Halden, they really want me for this job, I got the feeling. I will be working part-time so that I can still continue to be an elite athlete, to go to the World Championships, to prepare myself as I want and, at the same time, to be a coach. I think that it's important to make a change sometimes. I want to go forward in this coaching work, and that's a great possibility for me, now.

Can you share with us some ideas that you still have for this job of being the Halden's coach?

E. J. - My main task will be the technical training. I feel quite confident that I can prepare interesting courses and organize trainings. Halden is a very successful club with many victories in Tiomila, Jukola etc., but I'm more thinking like what, in a practical way, can I do to help the runners to develop one step further.

E. J. - Well, the first challenge is, probably, getting their trust. If they don't trust me, then they won't listen to me. I want to listen and to understand how the club works and what the runners want.

Now you are here in Portugal, helping Fernando Costa and Orievents to organize some Training Camps in Norte Alentejo. Please, tell me, do you still think that Portugal is the orienteers' paradise in the winter?

E. J. - Yes. I mean, it's nice to see how Orienteering continues to be developing here, more maps are made, the quality of the competitions is really good, you have good weather and nice terrains. It's attractive. I like to work with enthusiastic people and Fernando is such a person.

How many times can these maps and terrains be used?

E. J. - I have been training 5-6 times at some areas here but I can still get a good training there. Some of the maps are very detailed; you do not “learn” such a map in a few trainings. Here in Portugal you seem to be often trying to find some new terrains. I got to know, for example, that the club which will organize the Portugal O' Meeting next year uses areas pretty far away where the club is located. I really like the idea that you are searching the whole country for the best terrains, not just looking what you have close to your home town. This approach is not very common in Scandinavia. And I guess there are many interesting areas in Portugal which have not been mapped yet.

Next year, the World Orienteering Championships will be played in Finland. Any expectations for the WOC?

E. J. - My goal is to come to WOC in a very good shape. I have high expectations on the quality of the races. After seeing the Finnish world cup races this year. I got a feeling that the WOC organizers are focused on making the best possible courses and that brings extra motivation for me.

About yourself, any plans for the future?

E. J. - Next year I still want to do my best as an athlete. After WOC I will make a decision about the following year. I do not know now. I am just about to turn 34 but I still find a lot of motivation to challenge myself and to explore areas where I can improve as an orienteer. At the same time I am excited about my new job in Halden where I am moving in the beginning of December. I can see myself working as a coach even in more distant future, but I cannot say now what I am motivated to do in, let’s say, in 10 years.