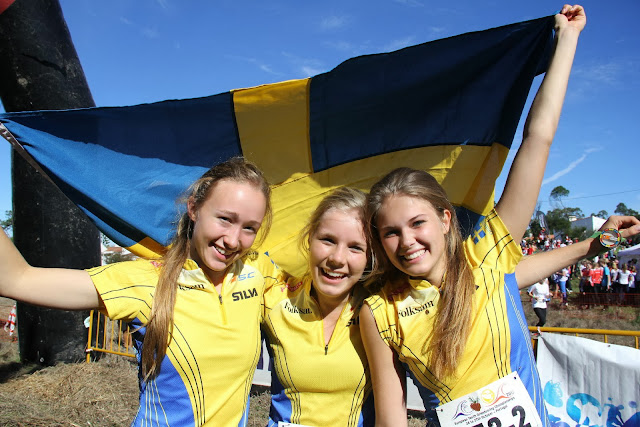 After the Switzerland, Sweden, Finland and Denmark's dominance on the first two days of the European Youth Orienteering Championships EYOC 2013, the last day allowed to add the names of Russia and the Czech Republic to the set of the big winners. Individually, Sara Hagstrom won everything there was to win and she is, undeniably, the “queen” of these Championships. Succeeding the Czech Republic, Finland was the winner overall.


The 15th edition of the European Youth Orienteering Championships EYOC 2013 came to the end this morning, in Vale Benfeito, Óbidos. An edition marked by the excellence of maps and terrains, an organization attentive and fully available to the 362 athletes from 32 countries presents, overcoming moments of enormous significance and value to the participants and, last but not least , warm weather and bright sunshine, to put even more colour and life on everyone's faces.

Eagerly awaited, the Relay ended the Championships with an atmosphere of party and joy. Involving a total of 92 teams spread over four levels of competition, the courses were marked by the uncertainty about the winner until the final second, involving some surprising twists and a couple of unexpected results. In terms of twists, the most fantastic was led by Sweden in W18 Class, while the biggest surprise was eventually carried by Hungary, silver medallist in the W16 Class. As for the Portuguese, again, the last day of doesn't add something substantive in terms of results, and the M16 team achieved the best result, finishing in 12th position.

Starting by “waves”, according to each class of competition, the M16 Class was the first to show a winner today. With a very strong beginning, the Russia team took over the race right in the first round and never dropped it. Big star of the two previous days of the Championships, the Finnish Olli Ojanaho still managed to shorten the gap by more than two minutes in the final leg, but Aleksandr Pavlenko managed well the advantage, reaching the Finnish in the lead.

“It was fantastic , like a dream.” These were the first words of Pavlenko, the man who had the privilege to offer Russia its only gold medal in these Championships. Admitting that to win the race was in the plans of the Russians, Pavlenko praises the excellent teamwork, “against a very strong Finland, which further enhances our result.” Concluding with a particular reference to its course and how was it to deal with the pressure of knowing Ojanaho behind him, the Russian said: “I tried to do my own race and forget about everything else. Into the forest, it was just me, the map and the course.”


The most confortable victory

In the W16 Class, it moved to the Czech Republic rather what happened to Russia in Men's Relay M16. By registering the fastest times in the two first legs, Tereza Cechova and Barbora Vyhnálková offered a comfortable advantage to Barbara Vavrysová, that the she knew intelligently manage, and even expand it up to more than five and a half minutes late on Hungary, in what was the most advantaged victory of the journey.

Barbara Vavrysová that in the end was absolutely overjoyed: “It was my first presence on a EYOC and this victory is awsome”, she says. Although a comfortable advantage to manage on the last leg, the athlete assumes that “I had to win , I had to do this for me and for my teammates.” And she adds: “This was our goal , the goal of the Czech Republic and I am very happy to have been realized.” But this is just the beginning of a career that expects full success: “Me and my colleagues will certainly the opportunity to participate more often in EYOC and this gold medal gives us the strength to think of new triumphs in the future.”


The best ending for Sweden

Starting for the third leg in a disadvantage agains the powerful teams of Switzerland and Russia, the Swedish team had in Sara Hagstrom a real talisman. After the victories of last Friday and yesterday that earned her the European titles of Sprint and Long Distance, the Swedish athlete eventually turn the result, making a 'full' of gold medals and becaming the biggest star of these Championships. Sara Hagstrom impressed all who had the chance to follow closely this EYOC 2013, either by their physical and technichal capabilities, both for their winning attitude, being a name to hold in the future and which the Orienteering can have much to expect for.

Between screams of satisfaction and many greetings from opponents and teammates, Sara confesses that this was “a tasteful victory.” The athlete confesses to be “very confident when I left for my course, knowing beforehand that the Relay would be different from what I did before. The only strategy to follow was to do my race and not think about my opponents; the key to victory would be in there.” With Russia out of the race early in the last leg due to a huge mistake by Marina Trubkina, the struggle was confined to Swedish and Swiss: “While recognizing that the silver nedal would already be great, when I went to the last 'loop' I decided to take the risk and I ended up putting the pressure out of my side.” By the end she knew how to manage her course and this win is actually a lock with gold key of the Championships that, in this Class, couldn't have been more successful.

Finally the M18 Class, the one where the most tough dispute was and where the uncertainty as to the winner took longer to unravel. Finland, France, Norway and Switzerland have managed to stay together during the first two legs, ending the course for solving in favour of two Nordic countries, with Finland surpassing Norway at the end and getting the gold with an advantage over than one minute.

Responsible for the decisive leg, the Finnish Aleksi Niemi lived with this victory “a time of great excitement and joy”, especially after the frustrating course yesterday in which he made “a huge amount of mistakes”, he says. Seeking to develop his course “by thinking only on my job and forgetting the others" the Finnish athlete acknowledges that this victory “means a lot to me and to my country.”

Posted by Joaquim Margarido at 5:29 pm