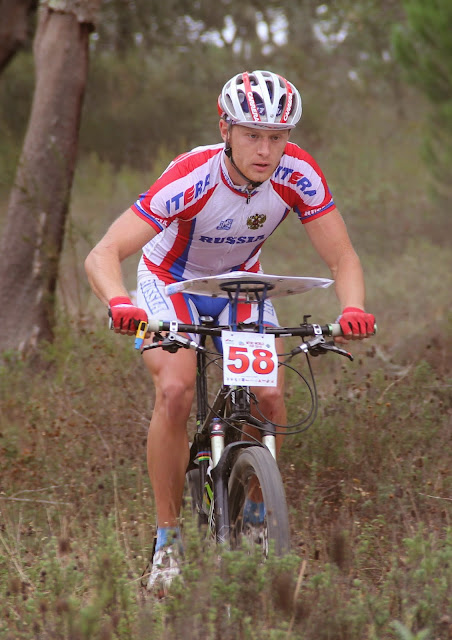 With the victory of the Czech team in the Mixed Relay race, held today in Santiago do Cacém, the final round of the MTB orienteering World Cup 2013 came to an end. Anton Foliforov and Marika Hara were the big winners of the World Cup while the Portuguese Carlos Simões was in focus in the World Masters Championships, reaching the gold medal for the third time.


The MTB orienteering World Cup 2013 came to an end. The event brought to the beautiful Alentejo coast all the biggest names of the MTB orienteering world, beeing a huge success, both in a sportive and social way. Congratulations to the Portuguese Orienteering Federation, as well as close to a hundred volunteers, led by Augusto Almeida and supported by the municipalities of Sines, Santiago do Cacém and Grândola, by the success of such a demanding and important initiative.

In today's course, a Mixed Relay full of emotion, the Czech Republic was the big winner. With Olga Vinogradova in top form now, the Russian team got the lead on the first leg, but Jiri Hradil, first and finally Krystof Bogar, were stronger than Ruslan Gritsan and Anton Foliforov, recovering from the initial disadvantage of three and a half minutes to get the victory in 2:15:52, against 2:19:46 of their direct rivals. Great sensation of the season, the Finns - with Susanna Laurila , Tuomo Lahtinen and Pekka Niemi - ended on the third place, ten seconds ahead of the Russians. Rita Gomes, João Ferreira and Davide Machado, the best Portuguese team ranked, took the 16th position.

In the World Masters MTB orienteering Championships, the Portuguese Carlos Simões was again in focus, winning the Sprint world title. Simões starred another historic journey to Portugal in the H40 Class, looming against opponents of recognized value and completing the 5.8 km of his course in the first position, with the time of 17:39. With this victory today, Simões gives to Portugal three gold medals, something unique and that reflects the value and quality of the Portuguese athlete, born precisely here, in Santiago do Cacém, 41 years ago.

But Simões was not the only Portuguese to climb up the podium in this final stage of the World Masters Championships. Also Susana Pontes knew how to "break the curse" of the two fourth previous places, finishing in the third position and repeating the place achieved in 2012 in Veszprém, Hungary, also in the Sprint's final. A race won by the Danish Nina Hoffmann with a time of 17:56, the Portuguese athlete needed 3:27 more to complete the five kilometres of her course. In the remaining classes, the Australian Carolyn Jackson did, as Carlos Simões, a 'full' of titles in the W50 Class, as the Swiss Monika Bonafini in W60 and the Finns Heikki Saarinen (M60) and Pertti Nyberg (M70). In M50 Class, the Frenchman Jean-Charles Lalevée took the highest place on the podium, repeating the result of the last Championships, in Hungary.

From yesterday, came the victories of Anton Foliforov and Marika Hara in the MTB orienteering World Cup 2013. In the decisive race, a Long Distance held in Sines – as a curiosity, the number 50 since the first stage, in Hungary, in April 2010 -, the doubt as to the winner was a constant, with the Russian Anton Foliforov and the Estonian Tõnis Erm by one hand, and the Finnish Marika Hara and the Swedish Cecilia Thomasson, by another, to wage private duels in search of the intended title.

Fruit of the victory achieved on the eve, Foliforov starts with a little advantage of six points over his direct opponent. Erm's hopes lived in a victory, the only result that guaranteed immediately to overcome Foliforov and take the World Cup to Estonia. But the truth is that the athlete did not achieve to put on the ground the qualities and capabilities that make him the current World Champion of Sprint and Middle Distance, not going beyond the eighth position and leaving away the title to Foliforov. The Russian's second place - the winner was the Czech Krystof Bogar , a colossus of strength and a true expert in Long Distance, whose World title he owns – was enough to increase the World Cup's leadership, arriving for the first time in his career to the most desired place. Third in the course, the Finnish Jussi Laurila wasn't able to renew the victory of 2012, but achieves the necessary points to overtake Tõnis Erm and finish in the second place.

In the women's Elite class, the day was of Finland. Firstly because of Susanna Laurila's victory in the stage, ahead the French Laure Coupat. But it was Marika Hara, the current leader of the IOF's World Ranking, who benefited most from the result set, achieving a real volte-face in the final and, for the third consecutive year, getting the victory in the World Cup. The Swedish Cecilia Thomasson, ranked only 14th place in the decisive race, offers to the Finnish the possibility of recovering four points and came to the final victory. With six athletes still having the chance to achieve the third place, it was precisely Susanna Laurila that concluded in such position, relegating to the fourth place the British Emily Benham .

A word to the Portuguese athletes in competition, especially for this creditable 12th place achieved by Davide Machado, less than two and a half minutes of a position in the top-6. One place - so all we hope – that may be a real turning point in the misfortunes that have knocked the door of the best Portuguese MTBO athlete of all time, throughout the entire season. Luis Barreiro, in 30th place, was our Portuguese second best athlete, followed by João Ferreira, in 41st position. In the women's Elite class, Rita Gomes, Catarina Ruivo and Joana Frazão occupied, by this order, the last three places of the table.

Speaking to the Portuguese Orienteering Blog, Anton Foliforov was not entirely happy with his performance, “especially with my option to the 5th control and other small mistakes”, but always said that his opponents “made more mistakes than me.” The exception was Krystof Bogar, who stole the Russian the possibility of reaching his seventh victory in a World Cup stage and thus join the Danish Erik Skovgaard Knudsen in the leadership of the winners ever in individual stages: “Krystof is very strong in Long Distance, he won today, he won well and he's an athlete with a huge future ahead, I believe. Of course my goal was to repeat yesterday's result, only it was not possible. But my victory in the World Cup makes me, naturally, very pleased.”

Although sparse in words, Marika Hara also left some impressions: “My goal today was to make a good race, without creating any kind of expectations for a position in the end. But I ended up committing some minor mistakes and they [Susanna Laurila and Laure Coupat] were better than me.” Analyzing her season, that culminated with the conquest of the World Cup as a corollary of a huge regularity, the Finnish athlete acknowledges: “I tried to give my best in every race and to make the best choices.” And weaves the highest praise to her great opponent of the season, Cecilia Thomasson, considered to be “a great athlete, very fast and very strong, an athlete that I respect and admire.” Finally, about the question regarding the goals for the next season and for an eventual return to Portugal: “I have no plans... Not yet!”

See the complete results at http://wmmtboc2013.fpo.pt/index.php/pt/results1.