Miguel Silva: "Is there a logic in leaving me out of the four selected athletes in a WOC where 50% of the races are sprint races?" 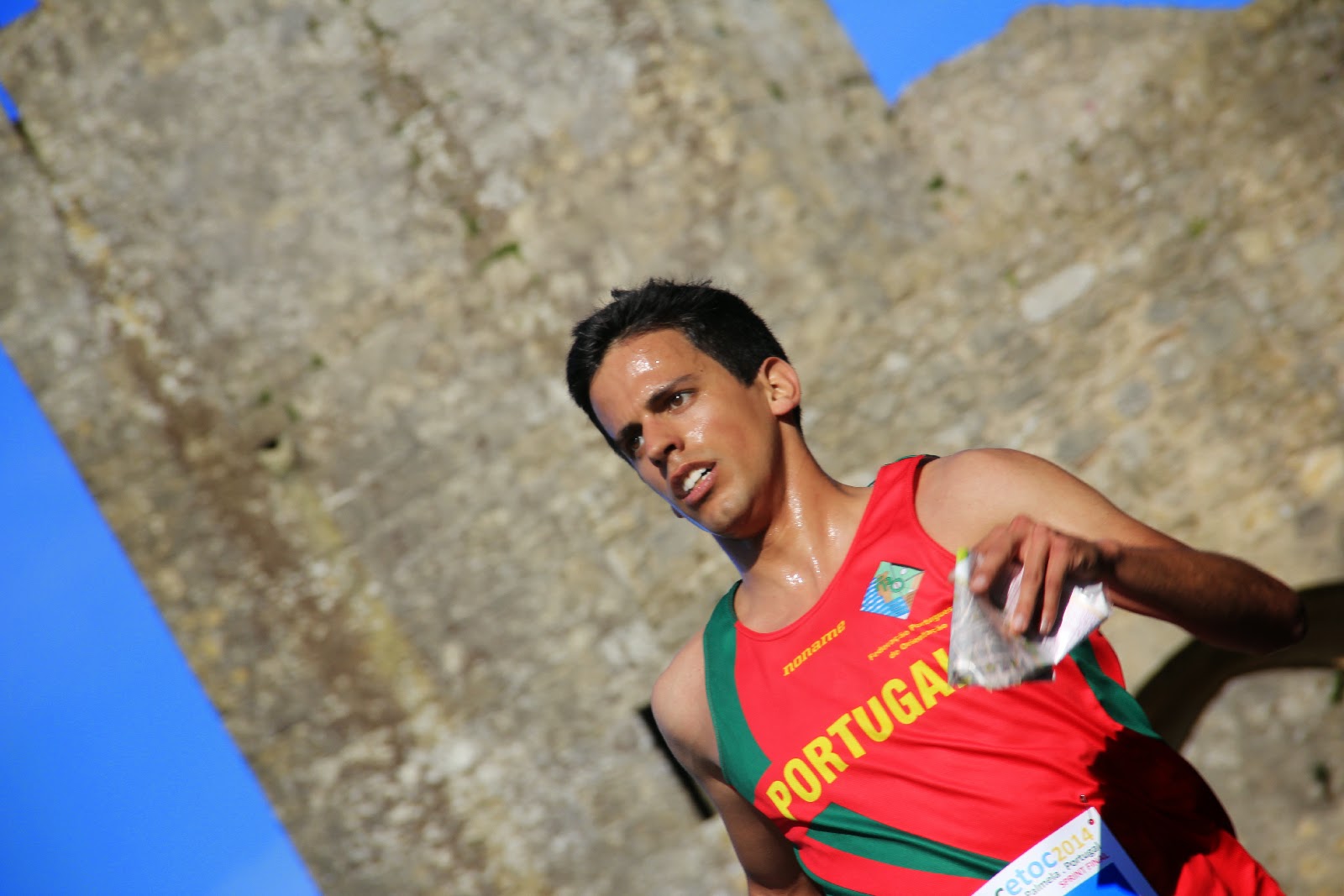 
What ideas do you keep from the World Orienteering Championships WOC 2014?

Miguel Silva (M. S.) - I think that one of the main reasons for wanting to participate in a WOC is the fact that we’re sure that it’ll be an event with quality maps and courses and an organizing structure that supports the athletes in their needs. By the feedback that I’ve obtained, I think that this WOC wasn’t different from the previous ones. I was expecting that the sprint maps were more technical and I’ve heard some athletes complaining about it. The middle distance, long distance and relay, in alpine terrain, seemed really interesting with defying courses.

Were there some results that surprised you?

M. S. - In the sprint distance, I think that no one expected the Danish dominance that reveals the importance of the preparation of a sprint race. A few years ago there were rumors that the best teams mapped the sprint areas before a race. In the last years it became usual and nowadays, I think that all national teams do it, better or worse, according to their resources. I’m not sure if this was a positive thing; maybe the organizations shouldn’t make the sprint areas public until a few days before a race or should give the map to everyone in advance. In the sprint race, the 7th place by Yannick Michiels shows the potential of the new sprint generations that, before their physical capabilities, will easily reach the top of the table. In the long distance I highlight the impressive final part of Thierry’s race, where he has won many seconds that gave him the victory. I also highlight the 8th place of Gernot Kerschbaumer, someone who has dedicated a lot of himself to orienteering lately and who has seen his effort recompensed. In the women, I think that everyone was expecting a Judith/Tove duel, but the Russian Svetlana Mironova ended winning the race. In the relay there were some emotive and surprising sprints, with Kyburz winning to Gueorgiou and Lundanes to Bostrom.

How do you analyze the performance of the Portuguese team?

M. S. - I think that we kept the low level of the last years, for which I’ve also contributed. Of course that it would be easier and more politically correct saying that it was a good WOC, but I consider that we have to have ambition, think about what we can change and go beyond where we are right now. I haven’t found a national team ranking yet, but probably we have fallen to the 3rd division with only one athlete in each final next year. I must say that all Portuguese national team athletes are more less at the same level and that I don’t think that I would get better results than the ones that were achieved by my colleagues.

Talking a little about yourself, you appeared strongly in Penedono, winning the National Sprint title, but otherwise you've been out in many events this season. I imagine that the demands of your profession don't leave you enough time...

M. S. - There are years in which races and the extra-sport life fit perfectly. There are others, as this one, in which it doesn’t happen and we have to make choices. In Costa AlentejanaOmeeting, Trofeu OriMargel Sul and A LOT, I had medical courses where I had to present some works. I was in the organizing team at POM. Only at the Iberian Championships in Soria (where almost no Portuguese athlete participated) I was participating in a mountain race, Zegama Aizkorri at the Pirinees. During RA4 I was at Jukola, having spent some days after training in Sweden. In the Sprint and Long Distance national champs, by constraints of the holiday calendar of my girlfriend, I was on vacation with her because it was essential to maintain the personal/sportive balance.

Tell me about your title in Sprint and how did you taste it.

M. S. - The victory gave me some nice feelings but it’s just the end of a training process that gives me a great satisfaction, by itself. In the daily training I don’t train for titles, since I find it grueling from the psychological point of view. I train to better my performance, to discover where my limits are and to socialize, since many of the interesting people that I know are sportspeople.
However, it was a bitter victory, since the season ended there and I didn’t have the opportunity to compete in more competitive stages.

Yes, it's true that you are the National Champion in Sprint, you're the second best Portuguese athlete with best average in the Portugal Cup's ranking this season and you get a place for the Sprint Final of the European Championship last April. How do you feel by not being called, this time, to a presence in Italy with the Portuguese team?

M. S. - This season I was the best portuguese in every sprint race that I’ve participated, apart from two: NAOM, where I was second best and EOC where I wasn’t able to compete at my best because of an Achilles tendinopathie and a cough. Is there a logic in leaving me out of the four selected athletes in a WOC where 50% of the races are sprint races? You could tell that I was really weak in the forest (to Portuguese standards), but I’ve been top-3 in most of the races where I ran. I’ve been told that I was out because of my lack of dedication to the sport and because I’m only interested in mountain races. In fact, during EOC, it was suggested by an athlete and discussed among the national team, if I should even race in the second Portuguese team (suggesting that I should be out of the two relay teams). The truth is that there are many examples of orienteering athletes who are, at the same time, top mountain running athletes. The truth is that I’ve become faster in orienteering since I started training more specific to mountain races.

If, once again, I had trained all season with only a title or a selection in mind, I would be destroyed right now. In the end, I participated in the World Skyrunning Championships in Chamonix, where I was 26th while I was running side by side with athletes that I only used to see in posters or movies, where I met amazing people and from where I returned with the certainty that a world top-10 is easily achievable. Of course that it has opened new possibilities and, since, compared with this year, I don’t predict that next season I’ll have more spare time to invest in Orienteering, which will make it impossible to compete at an international level, it’s a logic choice to spend more time on mountain running.

How do you rate the current moment of Orienteering in Portugal?

M. S. - We are not well, because we lack a long-term plan. We’re losing athlete in each race and we are returning to the same athletes that were competing 10 years ago. The small clubs can’t impose themselves and there is a constant migration of athletes to the bigger clubs. Orienteering has everything to become an emerging sport in the XXI century, but we haven’t been able to make it appealing in Portugal yet. Why? There are many possible answers to this question but I consider that one of the main reasons is that we lack a good marketing strategy. We need more kind of work as the one that Fernando Costa does with Orievents. At the first sight, this may seem futile and superficial, but the creation of an image and a “dream”, may bring lots of athletes to a race, by reasons from the subconscient domain. These athletes make a big number and make the races famous. This number will draw the attention of the big companies that want to promote themselves in big groups of people. This companies will invest in the sport, making it grow, resulting in a richer federation with more athletes. Of this group of athletes will result a more competitive national team which will be supported by a richer federation.

I’ve seen this cycle happening with some other sports. Mountain running, nowadays also called trail running, is a recent example of this phenomenon that, even without a central governing entity, say the big races and outdoor companies betting in the marketing area, resulting in a huge interest by the community and other companies. Which was the result? Most of the entries are now sold out many months before of the main races. We, in orienteering, are able to maintain extremely organizing structures that mobilize hundreds of volunteers (is there any sport with the same requirement?) but we haven’t been able to grow because we don’t bet in the marketing area, that is essential in the contemporary society.

And what about the other disciplines?

M. S. - Regarding to the other orienteering variants, I think that we are growing upside-down in a base that is not sustainable for a long time. The sustainable distribution of athletes in any sport should start with a pyramid with a large base of sympathizers and sporadic participants that narrows to a federated group, that narrows to a high level performance group, that narrows to a national team. In MTB we have Davide Machado, an exceptional athlete and a variant with just a few athletes and a lack of public visibility. In the Trail-O, we almost don’t have any races in Portugal, but we invest in a national team to be at the World Champs. In my single opinion, we should invest in the base of the pyramid so, in 5 years, we’ll have many exceptional athletes participating in international races, with a solid base behind. But it’s just my opinion and there are plenty of possible viable ways. I must say that Orienteering, in Portugal, is a sport with an unique model based on volunteers, where many people spend a lot of their time working for a common goal, being all of them people that I admire. We have to be conscious that, before the amount of money that the Portuguese government invests in sport, we are already really far.

How far can you go with your ambitions? How long are we going to see you doing orienteering?

M. S. - In the sportive field, my ambition is to reach the further possible, according to the other variants of my life. I’ve been doing orienteering for 16 years and my Portugal Omeeting was in 1999. I’ve practicing this sport for a long time, I’ve got great friends in this community and I have an immense pleasure while navigating through the forest. By all of this, I’m certain that I’ll keep participating in o-races for the rest of my life. However, I only live once, and I don’t want to limit my life to this sport, nor to the sports world. I’ll keep participating in o-races, as I’ll keep investing in becoming a better doctor, in becoming a better mountain runner and becoming a better person, whether through investing in the multiple sides of my education, whether through the personal relations with the ones around me.