WOC 2014 and Bruno Nazário: "These athletes will give us many joy in the future" 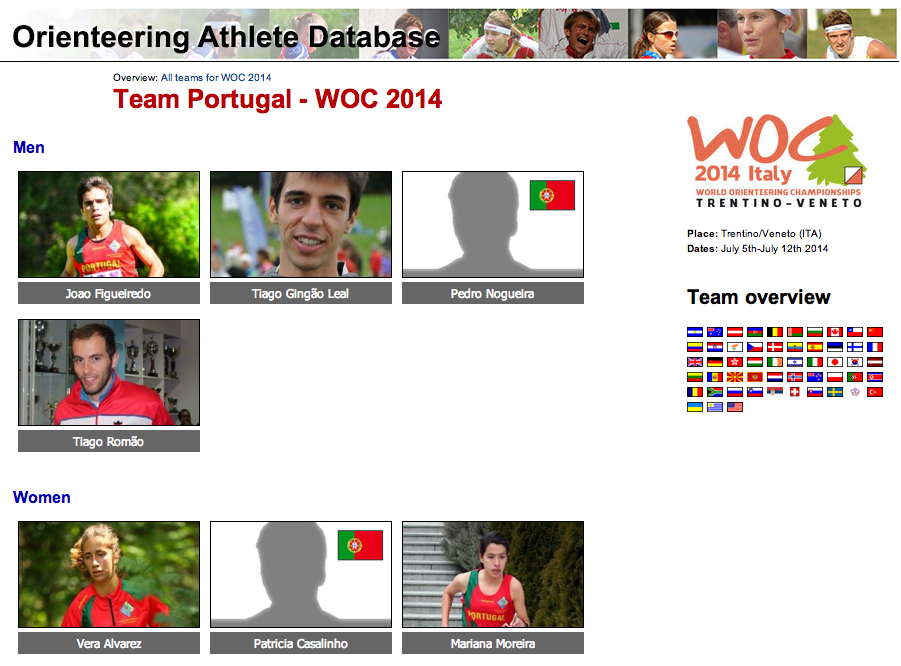 The presence of Tiago Romão and Tiago Gingão Leal in the Sprint Final of the XXXI World Orienteering Championships WOC 2014 turned them in two of the great protagonists on the first day of competition. In the end of another extraordinary orienteering journey, we note the words of Bruno Nazário, in which is reflected the feelings of the Portuguese Team's coach and are a preview of a week full of emotions.


Two athletes in the Final of a World Championships is, once again, a great moment for the Portuguese Orienteering. What is the importance and meaning of this result?

Bruno Nazario (B. N.) - It's the athletes' work. Yet in the European Championships we had an excellent performance in Sprint and it is revealing that is in this discipline that we have more potential in the short term. It is a good indicator for the two athletes, who are still young and know they have a long way to go to reach the top world. The results in the Final were not as expected, a little fruit of fatigue, the short time for recovering between the Qualification heats and the Final, but these things are thinning and these athletes will give us many joy in the future.

Did you expect that Portugal could reach the Final with two athletes or your ambition was a little further?

B. N. - Honestly, I was expecting to have all our five athletes - three men and two women - in the Final. If we analyse the women's course, we easily realize that Mariana Moreira has not entered in the Final because she wasn't able to find an underpass hidden behind the many stalls that lined the main street of Burano. The 1:41 lose at a single control took her the chance to go to the Final, it was clear. As for Vera Alvarez, it would be more difficult to ensure the ticket to the Final, but wasting time soon to the first control because of a dog just didn't help. And João Mega Figueiredo seems to me indisputable that, after what he did last year and this year in the Sprint Final of the European Championships, everyone in the Orienteering community hoped he would be in the Final. But, like Tiago Romão and Tiago Gingão Leal, all of them are very young athletes and with much work ahead.

I would like to know, in general terms, your first impressions about the start of the competition.

B. N. - The coach is always stuck in Quarantine and I'm not the best person to do this review but the first impressions are good and the organization very positive. The places chosen for the two courses of Sprint are lovely and the only repair goes to the fact that there had been the possibility of a little more recovery time between the two courses. We heard many athletes to say that, from a certain point, it “ended up the fuel” and this has to do with little recovery time, the impossibility of making a careful diet and another kind of constraints that have been imposed on us.

Without put into question the fairness of Søren Bobach's victory, what we know - and he says it publicly, even before the course - is that there is a prior knowledge of the map very deep. In what way this fact reverses what should be the essence of orienteering itself?

B. N. - This is homework, is a work of preparation that our athletes do, as well. For the people in general to have an idea, I already had a map of Burano that I could find on twitter, but not satisfied with that Tiago Romão took the map, redesigned it and spent hours and hours on Google Street View studyin Burano from part to part. Unfortunately we couldn't prepare so well for the Final, but I also drew some routes and they turned out to be quite coincidental. Anyway, it's a job that everyone does nowadays, everybody use tools that are available to everyone but there is one thing that may not have been very perceptible and in which the organization was very good: Along the course there were temporary seals and cut ways, fundamental aspects to “shuffle” a bit the question of the obvious route choices, especially in such cases where the map is already public. If not, it would be, indeed, a matter of memory instead of navigation.

Making the the next days' preview, we have already on Monday an absolute novelty in terms of World Championships, with the completion of the Mixed Sprint Relay. Portugal is one of the protagonists of this historical moment and what I would like to ask you has to do with the expectations about the performance of our team. Top-15? Top-20?

B. N. - It's a little inglorious for us, because we never participated in an international competition in this format. It is an opening and hence there is no expectations minimally objective, ie, to point to a top-15 or a top-20. Is something still open. But I think our value lies in the great consistency of our team and we'll see.

What about the rest of the Championships?

B. N. - This year, another great feature is the extinction of the Qualification heats and the athletes will enter directly into the Finals, both in the Long Distance as in the Middle Distance. Hence we may say that a good result will be a top-45, which theoretically would amount to a Final in the previous years. But the situations are different, and is a first year in which the goals can't be pointed with the desirable accuracy. This, in addition to the terrains, which will be very, very complicated.