Bohuslav Hulka: "My best moments are connected with excellent people that I’ve met" 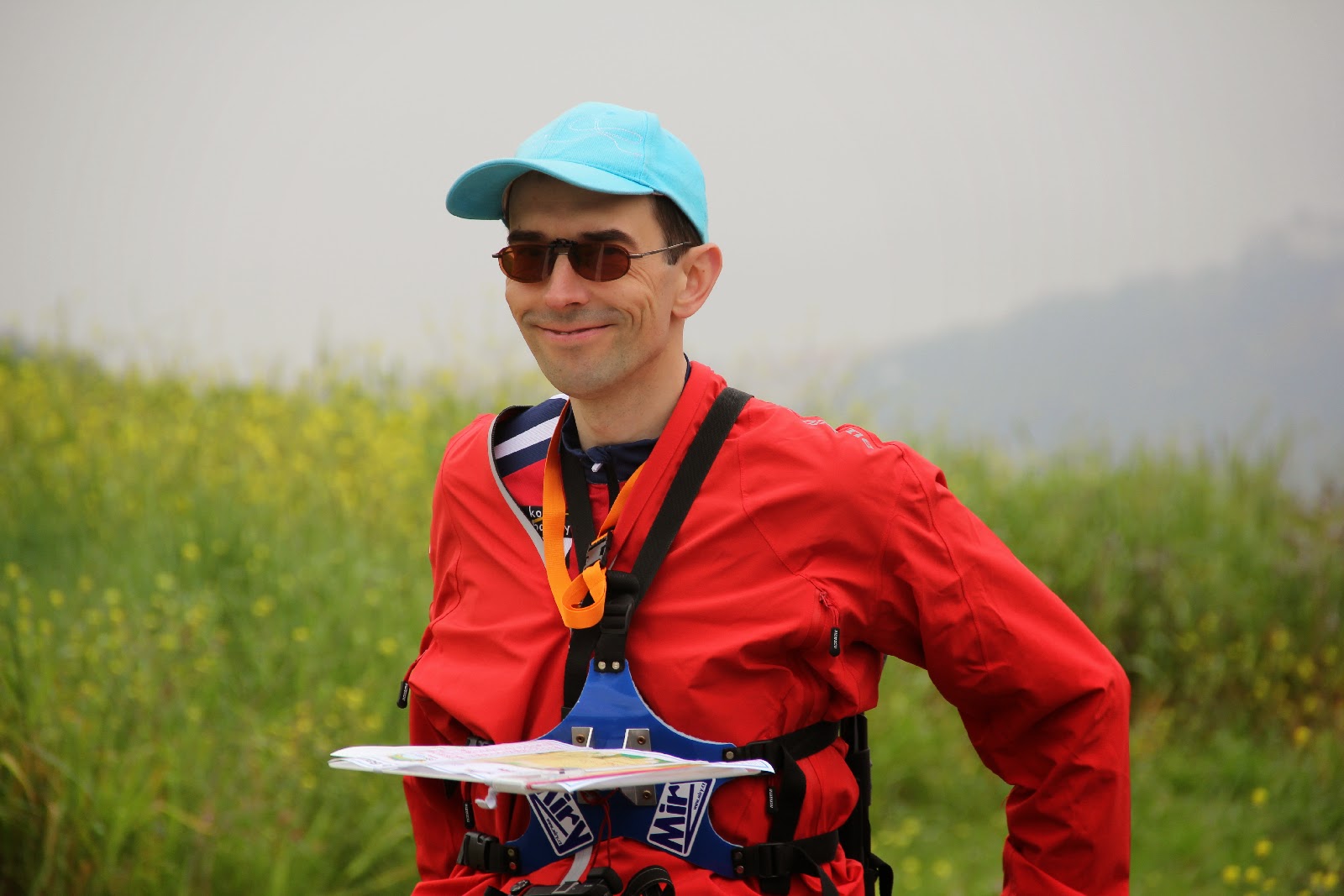 Bohuslav Hulka is one of the well known names in Trail Orienteering worldwide. Alongside with Petr Krystek, he was the first athlete carrying the Czech Republic's flag in a World Trail Orienteering Championships. From Kiev, in 2007, to the present time, Hulka was a constant presence in the biggest events of the international calendar. Now that the WTOC 2014 is part of the past, it's time to look back at almost a decade of activity, both on the competitive chapter, as in organizational and institutional terms.

I would like to start by asking you about your experience in the IOF's TrailO Athletes' Commission (TAC), at the time of your exit?

Bohuslav Hulka (B. H.) - I consider the TrailO Athletes' Commission as an opportunity for TrailO to have a well-structured way for athletes to improve the development of the discipline. I wish the TAC could be something like the megaphone of athletes' voices. After my appointment, I thought that some competitors could find in me the right person to share their opinions with, for them to be heard and considered. I have to admit there were some initial difficulties in TAC work. We were appointed and, just after that, there were changes in the rules made which we were not able to interfere with. We also had very long gaps in some e-mail discussions. But I feel that now the situation is much better. The lapse of time between the arising of an issue and the suggestion to the Trail Orienteering Commission (TOC) is much shorter. There are respected and active personalities in the TAC. Meeting TOC and TAC together also enhanced the seriousness of TAC. And - we had one new phenomenon – TrailO blogging. Now we have much better opportunities to hear voices of many particular athletes. Good job with visible results, thank you, Joaquim!

Could you mention some of the most important moments during your stay in the TrailO Athletes' Commission?

B. H. - I would like to name a couple of important topics: Championships' quality and competitors' satisfaction, zero tolerance, the JWTOC, conditions for competitors in wheelchairs and paralympic eligibility. The last two subjects are close to my heart.

What would you like to have seen and didn't happen?

B. H. - The current Paralympic eligibility criteria are based mostly on declaration – can I walk at a certain speed or not? I understand it as one of the headstones of TrailO, that unfortunately needs to be dug out and changed completely. One possible particular solution could be to compensate the handicap with different time limits. I hope that it can be made possible, bringing new Paralympic eligibility rules, more consistent with other rules, clear, fair and, of course, widely respected.

You competed for the eighth consecutive year in a WTOC, finishing for the first time in top-6. What did you feel when they called your name on the podium?

B. H. - In fact, I was called under the podium because of some stairs, but in a moment there were many people helping me up to the podium. Which is very similar with my trail-o carrier: my best moments are connected with excellent people that I’ve met.

Did you expect this result?

B. H. - On the past two years (in Scotland and Finland) I had extremely bad results so, this year, I did my best to be in the first half. The rest was pure luck. I don’t consider my WTOC performance as something exceptional. I did a similar amount of mistakes as usual. On the first day we had a short course and one voided control, and both helped me. I am quite the suspicious type and if there was not so “Z tolerant” model 2, it could have finished even better. The second day I did some unnecessary mistakes, but not too many, comparing with most of the other paralympic competitors. Quite exceptionally, I managed to fit in the time limit and punched what I wanted to punch. If I were in the Open class, finally, only few competitors would be behind me. Comparing with the last year’s WTOC title of my friend Jana, that would be 7th in the Open class, this one is a completely different level.

How do you rate the organization of the World Championships in Italy?

B. H. - Overall, good. There were some controls worth of improvement. Unfortunately, this is not only about the WTOC 2014. Many ETOC's and WTOC's before faced the same problems. Another problem was the speed of counting results. I don’t understand why, during Scandinavian competitions like O-Ringen, the results could be published just several minutes after the last competitor came to the finish and during the ETOC or the WTOC the results were often published several hours later. This lag leads to a situation where no one is sure and the sport seems to be more complicated than necessary. And we could notice, also, the lack of accessible toilets during the course. This was not so serious during this WTOC, but the lack of them can cause very unpleasant experience for disabled competitors, so I have to mention it.

During your presence in the European Championships, in Portugal, we spoke of the difficulty in “recruiting” Paralympic athletes to our discipline. Have you found yet the solution to the problem?

B. H. - The TrailO discipline could give an excellent opportunity to people with physical disability to compete with body-abled people and to beat them. I am happy that I can compete together with competitors like Agata Ludwiczak, Søren Saxtorph, Ken Gamelgård or Júlio Guerra, who have dealt with many more difficulties than me. In the Czech Republic we present orienteering for about ten wheelchair “newcomers” every year. We start with “sprint” wheelchair orienteering races, combining it with one or two TrailO/TempO stations. There are also two other “sprint” wheelchair orienteering races in different parts of the Republic. During the recent years, there are some orienteering disciplines that play a role in survival competitions, and also some “accessible” MTBO. We also work on public relations trying to increase respect for TrailO, so we speak about it on the radio, TV and press. And the result is one new disabled competitor every second or third year. This is different level from “hiring” ex-FootO competitors or map makers, where we can find more people interested in TrailO, with all prerequisites for being successful competitors. When you finally have a promising Paralympic eligible competitor, you need to encourage him/her. In case of quadriplegic, you also need to raise some money to cover appropriate assistance. What do you think – is it worth the efforts? I would say it is!

Is TrailO following in the right direction?

B. H. - The discipline's starting position is all but easy. I don’t know other sport that needs so much work to prepare the competition. It is not easy to explain or understand what it is about. The abolition of the physical element speed brings the opinion that this sport is not a real sport. The integration of physical disabled and body-abled people could be attractive, but the Paralympic eligibility criteria is not clear. The core of the discipline seems to be very “precise”, but it isn't. There are many subjective moments like limited exactness of map or tricky course setting that lead to complaints, protests, voiding controls, etc., and that didn't always lead to pleasant emotions. But there are many positive developments – TempO is established as a fair and respected discipline, the Relay format looks very promising and certainly more interesting and fair than the Team competition. The ceremonies are (often) together with FootO ceremonies. My dream is that TrailO could have a global partner (why not e. g. some big names like IKEA or Google?) and TV coverage for the most important competitions.

The season comes to an end and, therefore, I presume that your attentions are turning now to 2015 and to the World Championships, in Croatia. What kind of event do you expect?

B. H. - If there aren't any more big nature disaster like hurricanes, floods, earthquakes etc., the WTOC 2015 will be excellent, no doubt. There are a top course setting team and excellent advisers.
But I pay more attention to 2016, when we'll have the WTOC with the Czech SEA and especially the ETOC in the Czech Republic. It would be nice to make good results in home environment.

Do you already have goals set in the Medium and Long-term? How long will we continue to see you doing TrailO?

B. H. - I think one can do this sport until 110. But I would not like to compete continuously. If I find enough courage, I would like to take a break for several months or years and seek the balance between being strongly motivated and taking things lightly. If I fail, I will have to bother you for the next 70 years.