Ricardo Pinto: "I don't like to do the same mistake twice" 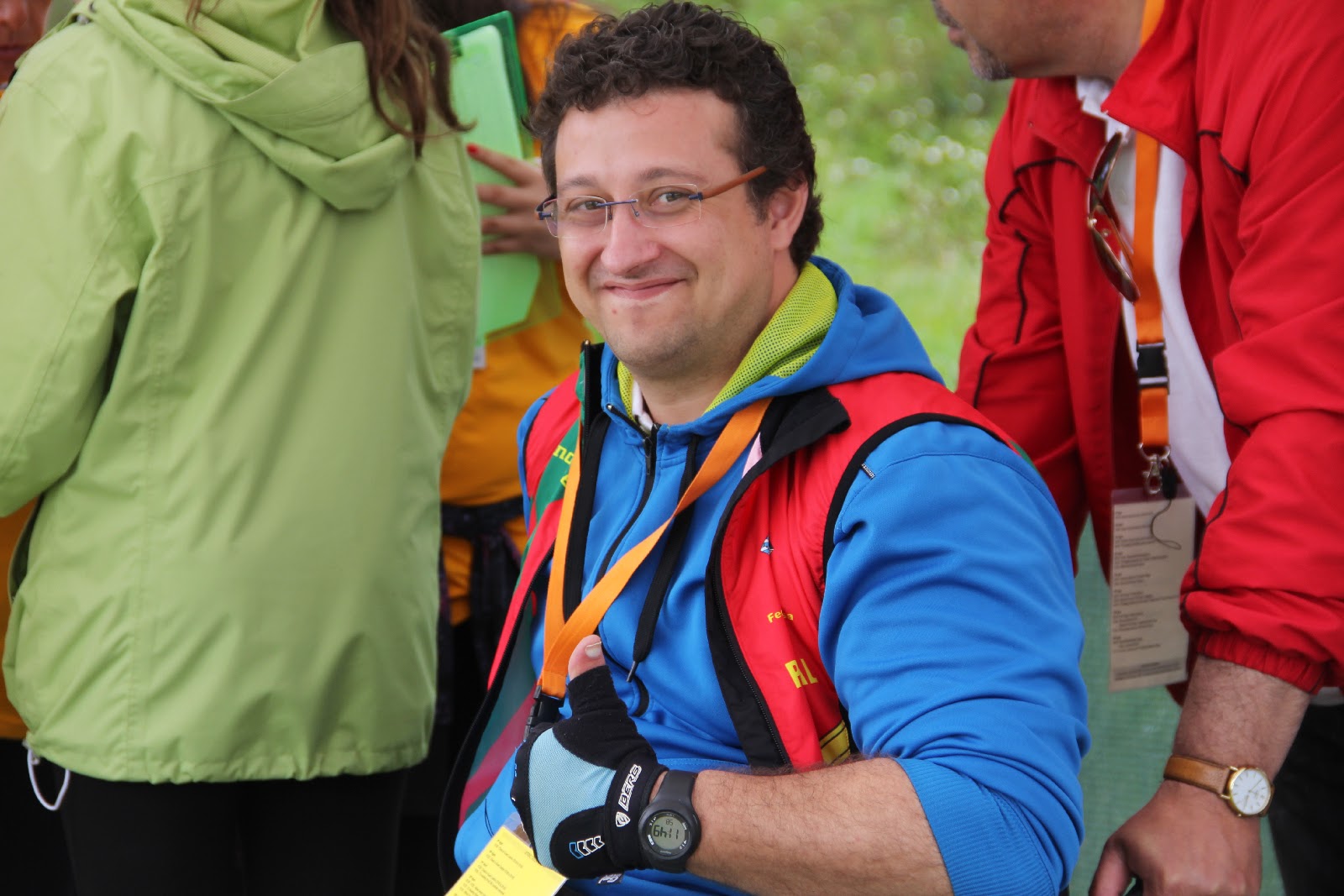 Ricardo Pinto reached in Italy the best result ever of a Portuguese athlete in PreO in the World Trail orienteering Championships. To the Portuguese Orienteering Blog, the paralympic athlete analyses his performances and projects the future.

On departure for the World Trail orienteering Championships 2014, you pointed the top-20 as your goal. After the extraordinary 16th position, I would ask you why did you believe that such result could be possible.

Ricardo Pinto (R. P.) - What I actually said was that my ambitions were to reach the top-20. To think about medals was out of my expectations, but I would be delighted to reach the top-20. Answering to the question, there was nothing to tell me that the top-20 was possible but there was nothing to tell me the contrary. Everything I learned during this time made me see that the distance that separates me from the world's best athletes is not that big. It seemed to me that the top-20 was an achievable goal and I did everything to get there.

The result achieved is the result of two days of intense competition. What are the key moments of your performance?

R. P. - The first day I went wonderfully well. I think I could do a good map reading and correct management of time, so the feelings after the race, even before knowing the results, were very good. On the second day, things didn't go exactly the same way. I knew that some of my answers were wrong, although check later that the wrong answers were not exactly those ones that I thought. Particularly in relation to the last control, I always have been fully aware that I right and, in the end, I was wrong. I'm sure that I counted correctly the flags - in fact, I did it three times -, I was saying to myself “Delta, Delta, Delta...” and then I pointed out “Echo”. I don't understand how I did such a thing.

You stayed out from the TempO final. How did it happened?

R. P. - The problem is that, somehow, I can't control my anxiety about TempO. I come to a point where I just want to “dispatch” the things and TempO don't work like that. Interestingly, the same doesn't happen in PreO timed controls, where I am much more calm and answer with greater certainty that in TempO. The fact to have “zero” answers in TempO controls, in my case, makes all the difference. In Italy, there was also an aspect that made me vey uncomfortable and that had to do with the fact that I have done all qualifying with a flat tire. Without want to make excuses about it, also think on the wheel and not just on the course turned out to be very adverse.

Your score on the second day was decisive to Portugal get the 9th place in the Team competition. Did you also expect a place in the top-10?

P. R. - Honestly, I had no expectations regarding the place that we could achieve. I knew things could be okay, and if I did a good result also the others would. I think this is a great result, but it could have been better if I had not missed one point or another.

The issue of "ifs" don't matters - other participants will also have their “ifs” - but being the only among the 20 first anrsweing wrong to controls 8 and 18 in the second day and, thus, to lose the chance to get a place in the podium is really frustrating. Did you ever think of that?

P. R. - Yes, I made this analysis. I must say that in the 8th control my time was very controlled. It was a mistake not have had the insight to measure the centre of the circle from another position. If so, I would easily realized that the correct answer should be “Bravo” and not “Alpha”. As for the control number 18, I must confess that I looked a thousand times to the terrain and I couldn't identify the knoll. So if there was no knoll, the obvious answer was “zero”. I think that I should lose there one more minute, and I would have answered the question correctly. The problem is that my time was all counted, then it would miss seven minutes to timeout, there were still controls 19 and 20 for answering and I could no longer spend more time. I realize that I was really close to an incredible result, but regrets do not help no longer. I've made my mistakes and there's no turning back now. In sure though, I don't like to do the same mistake twice and I rarely do it. So I just need to be with eyes wide open in the next time.

This was your third presence in a row in the World Trail orienteering Championships. Can you analyse each of these three moments?

R. P. - In 2012, in Scotland, I was basically blind. I didn't know what Trail orienteering was about and I went to learn. It was a fantastic experience, essential for me to grab with “ nails and teeth” to this discipline. In Finland, last year, the results eventually fall short from my expectations. Quite honestly, I thought I knew more than I actually knew. However, I learned a lot in recent times. The technical quality of events in Portugal increased enormously and this has been a great opportunity. I acknowledge that my performances in the various courses of the Portugal Cup were below my expectations, but learning from my mistakes was extremely important. Hence, to reach Italy, find good maps and terrains and face courses with a technical level not exceeding to what I was used, turned out to be decisive in the good results achieved. I would also like to praise the efforts of the Portuguese organizations to raise the quality of their events, especially this season. I would say that we have courses at the level of the World Championships.

Is there some aspects that you would like to highlight, looking to the other participants?

R. P. - I was quite surprised with Jana Kostová's performance. She is a great athlete and I was waiting that she could repeat what she did in Finland, where she was the World Champion. Have been ahead of her makes me proud, of course, but I think she is worth much more than what showed in Italy. This allows me to reinforce the idea that in Trail orienteering anything is possible. Even the best fail. I would also like to highlight the excellent work that is being developed in Spain and the good results achieved in the World Championships. Croatia has a very strong team and it was a well deserved victory in the Team competition, while Russia was, for me, a big disappointment, despite having a team composed exclusively of Paralympic athletes. Individually, the victory of Martin Jullum in TempO doesn't particularly surprised me.

What about the atmosphere within the Portuguese team. I know, beyond the huge team spirit, you learned with Nuno Pires 20.000 anecdotes about wheelchairs. Do you want to share with us one of it?

R. P. - (Laughs) I have no idea of one in particular, but it's true that the spirit of mutual aid and how to be within the group was excellent. I learned a lot with Nuno, Luis Gonçalves and João Pedro Valente, we met together after the races, we analysed our performance, we anticipated the next day and it was very helpful. Nuno Pires did a great job, he was a great team leader and that was crucial to our results.

What are your goals for the future?

R. P. - This year, the goal goes to hold the lead in the Portugal Cup and get back to victory. Moreover, the goals are the same: Participate in as many events as possible and continue to progress. I also believe that victories are important but are not the most important. The most important is what I can give to Trail orienteering. We still have a long way to go in spreading the discipline, and we must share what we have and what we know. This is the only way to continue to grow.