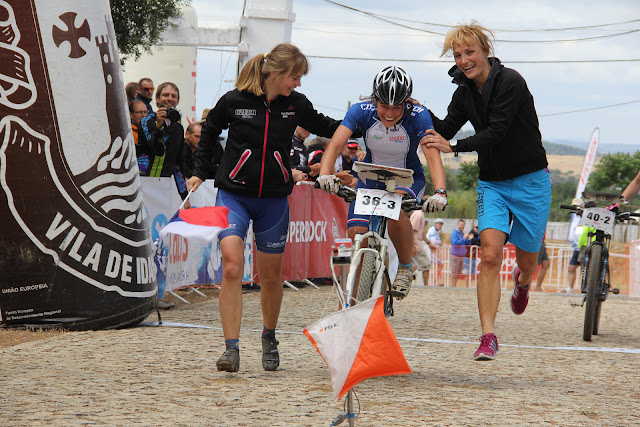 Great atmosphere in the final day of the European MTB Orienteering Championships 2015. In the last race - one Relay quite fast and exciting - the Czech athletes made a well celebrated "double", ending the Europeans in the same way they had started: at the highest place on the podium!


In a week where bicycle was the queen, Idanha-a-Nova received the European MTB Orienteering Championships 2015, in Elite class and also in the Youth and Junior classes. At the same time, it took place the World Masters MTB Orienteering Championships 2015, which allowed to know the world champions in 15 classes of competition. Saved for the end, the always tasty “bit” of Relay offered great moments of celebration at Alcafozes. In total, were in number of 73 the participant teams, involving more than two hundred athletes in this true celebration.

In the Men class, the fight was intense. The performances of France, Russia and Finland in the earlier days, put these three countries on the front line in terms of favoritism, but turned out to be the Czech Republic to impose itself, thanks to a faultless performance of its three elements. The France started better, through Yoann Garde, but it was the Czech Republic, with a fantastic performance of Jiri Hradil, who launched the team to the leadership in the end of the second leg. Unable to sustain the strength of the Finnish Pekka Niemi in the decisive leg, however, it seemed that Vojtech Stransky had nothing to do but try to hold the silver medal for the Czech Republic, but a problem with Niemi, already in the last part of the race, eventually stole to Finland the possibility to defend its European title achieved in Zamosc (Poland, 2013). The Czech Vojtech Sransky knew how to deal with the pressure of the young Frenchman Cédric Beill and the experienced Ruslan Gritsan (Russia) to take the victory in the time of 1:28:24, against 1:29:07 for France and 1:29:24 for Russia. The Finland finished fourth, leaving the fifth place, sensationally, to Spain. Portugal - with João Ferreira, Daniel Marques and Davide Machado - was ranked 7th, 37 seconds below the places of honor.


Portuguese juniors got the bronze

In the Women Elite, France and Finland shared the favoritism for the gold. With top-class athletes like Hana Garde and Gäelle Barlet, for France and Marika Hara and Ingrid Stengard, concerning to Finland, it would be probable that Nicole Hueber (France) and Antonia Haga (Finland) were the key for the victory. Both teams adopted similar strategy by launching its “rookies” on the first leg and while Hueber did it quite well, losing just over two minutes to the head of the race, Antonia Haga was really unhappy, loosing nearly eighteen minutes and smashing definitely the Finnish aspirations to retain the European title. However, in the lead, the positions would be setting. Nina Hoffman gave advantage to Denmark in the first leg, but it was the Czech Marie Brezinova, first, and then Martina Tichovska, to show the value of the whole team and to offer to the Czech Republic a victory unexpected but well deserved. Just one word to say that this result mimics the European Championships 2011 (Leningrad, Russia), where the Czech Republic also celebrated the two victories in the Relay on the last day of competition.

As for the European Junior Championships and European Youth Championships in MTB Orienteering, this Relay is marked by the disqualification of several teams because of a violation of a basic rule on departure. In M20, the victory smiled to Finland soon followed by Czech Republic and Portugal. In M17, France was the winner, with Finland being in the second place. In the female competition, was unsurprisingly that Russia was the winner, both in Junior as in Young, however fitting a prominent note to the second place for France in W17, only 1:45 after the “all mighty” Russian.

To see the complete results, please consult the event’s webpage at http://mtbo15.fpo.pt/.

Posted by Joaquim Margarido at 6:59 pm