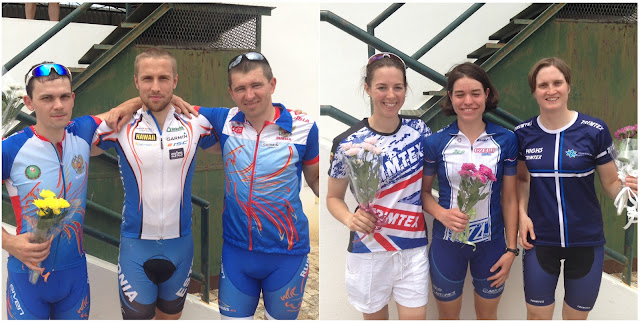 Not without surprise, Lauri Malsroos and Martina Tichovska won the first of three individual finals of the European MTB Orienteering Championships 2015. Through the streets and alleys of Penha Garcia, in a soulful Sprint, both offered to their respective countries - Estonia and the Czech Republic - historical gold medals.


Entered in the second day of competition, the European MTB Orienteering Championships 2015 saw today's program be filled with the Sprint, attended by 59 athletes im Men Elite class and 40 in Women Elite class. The event took place at Penha Garcia, in the municipality of Idanha-a-Nova, showing intense duels, as the final results easily demonstrate. With just 47 seconds to separate the 13 first placed in Men's competition, the Estonian Lauri Malsroos took an amazing victory.

The first half of the race was dominated by the European vice-champion in 2013, the Russian Ruslan Gritsan, to which succeeded the Frenchman Cédric Beill. It was already in the final part of the course that Lauri Malsroos took the command of the operations. The Estonian finished with a time of 19:01 - against 19:12 and 19:29 of the Russian Valeriy Glukhov and Ruslan Gritsan, respectively second and third placed - offering to Estonia its first gold medal ever in the European Championships. The Finnish Jussi Laurila, here defending his European title, had to settle for sixth place ex-aequo with the Austrian Kevin Haselsberger. The French Baptiste Fuchs and Cédric Beill fit the fourth and fifth places, in that order. The current World Champion in Sprint, the Russian Anton Foliforov, finished in 13th place, 47 seconds behind Malsroos.

In the women's class, the two big favourites - Emily Benham (Great Britain) and Marika Hara (Finland) - just played supporting roles in a movie where the star was called Martina Tichovska (Czech Republic). The Czech athlete had a better start, but quickly Marika Hara took the lead, although the advantage for her most direct opponents never reached significant margins. But a big mistake at the entrance to the last third part of the race made that the Finnish athlete lost almost one minute, dying here her hopes to revalidate the European crown reached in Zamosc (Poland, 2013).

Tichovska returned again to the leadership, at that time with a comfortable margin of 22 seconds over the British Emily Benham, thus remaining until the penultimate control, when she almost lose the race. With two controls and three seconds to the British athlete, current leader of the World Ranking, Martina Tichovska could find the strength to keep the narrow advantage, reaching thus her first major victory in an event of this level with the time of 18:40, in what is also the first gold medal of the Czech Republic in an individual final of the European Championships. Emily Benham finished two seconds after the winner, while Marika Hara was third classified, with more 25 seconds than Tichovska. The French Hana Garde and Gäelle Barlet, respectively 4th and 6th classified, and the Swedish Cecilia Thomasson, 5th ranked, closed the podium.

In the meanwhile, it also took place today the Sprint finals of the European Junior MTB Orienteering Championships 2015 and the European Youth MTB Orienteering Championships 2015, with France showing up again in its best way. In the Junior category, Antoine Vercauteren and Lou Denaix were the strongest, after yesterday's successful race of the French Team (with Florian Pinsard and Lou Denaix), getting the victory in the Mixed Sprint Relay (unofficial). As for the Young, Eerik Nurminen (Finland) won the gold in the men's class, while Russia got the three places in the women's podium, with Daria Mykriukova to be the strongest, after already yesterday have also taken to overcome the Mixed Sprint Relay (unofficial), pairing with Valeriy Rodin.

To see the full results and other information, please consult the event's webpage at http://mtbo15.fpo.pt/.

Posted by Joaquim Margarido at 6:46 pm