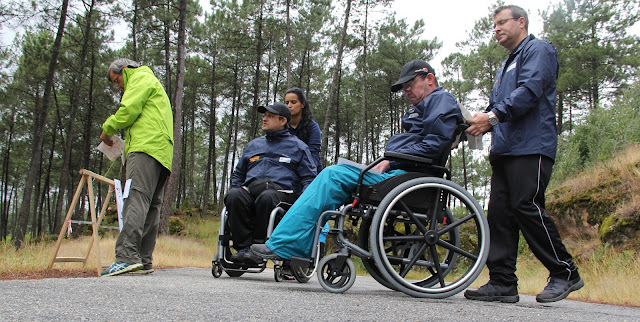 Jorge Baltazar and Ricardo Pinto were the big winners of the 3rd Portuguese PreO Championships that took place at Crasto forest, in Viseu. Scoring for the Portuguese TrailO Cup Invacare 2015, the event was a huge success, both for its technical challenge and the quality of the participants.


The beautiful green space of Crasto forest, one of the “lungs” of Viseu, received the Portuguese PreO Championships 2015, for its third edition. Organized by the Clube de Orientação de Viseu - Natura and the Portuguese Orienteering Federation, with the support of the Municipality of Viseu, Parish of Campo - Viseu, Sport and Youth Portuguese Institute and Invacare Portugal, among others, the event called to Viseu the best TrailO athletes in Portugal, offering an extraordinarily competitive journey, where the technical challenge tested the quality of the athletes.

With a course set by Luís Miguel Nobrega, the 3rd Portuguese PreO Championships saw Jorge Baltazar (GDU Azoia) achieved the title, making a total of 17 points within a set of 20 challenges. His long experience in Orienteering, combined with an enormous talent to this special discipline, resulted in a well-ran race and a well-deserved victory. Not without surprise, the second position fell to Ana Porta Nova (CPOC), one point behind the winner. And the result could have been quite different, with the athlete from Oeiras’ team answering wrong to the controls 7 and 11, two challenges where very few have failed. The third ranked was Nuno Pires (Ori-Estarreja), with the same points of Ana Porta Nova but worse performance in the timed controls. Next to leave for Croatia's World Championships, Luís Gonçalves (CPOC) was ranked fourth with 14 points, thanks in part to less achieved decisions already at the final part of his course, with three mistakes in the last four controls.

In the Paralympic class, Ricardo Pinto got an expected victory, thus collecting his third gold medal in as many editions of the Portuguese PreO Championships. Despite the good performance, translated in a “score” of 14 points, also the DAHP athlete ended up wasting at least two points, thanks to wrong decisions. Julio Guerra and Cláudio Poiares, both representing DAHP, occupied the immediate positions on the podium, three points behind the winner. Collectively, the DAHP played alone for the national title, aligning with two teams. DAHP 1 - with Ricardo Pinto, Julio Guerra and Jose Leal Laiginha – took the title, succeeding to CRN, winner in 2014.

But the event didn’t finish here, with a demo competition of PreO Relay - an absolute novelty in our country -, included in the program. Offering challenges consisting in a single flag each (called "cluster A" in the jargon of the discipline), the mind-blowing Relay could transpose to the TrailO the thrill inherent to this kind of races, with the mass start, the turnovers and the arrivals, that constitute moments of celebration shared by all. For the story, there are the winners: DAHP (Ricardo Pinto, Julio Guerra and José Leal Laiginha) in the Paralympic class and Ori-Estarreja (Antonio Amador, Nuno Pires and Nuno Rebelo) in the Open Class.

Posted by Joaquim Margarido at 9:44 pm