WMMTBOC 2015: Gold for Spain, Portugal get the silver 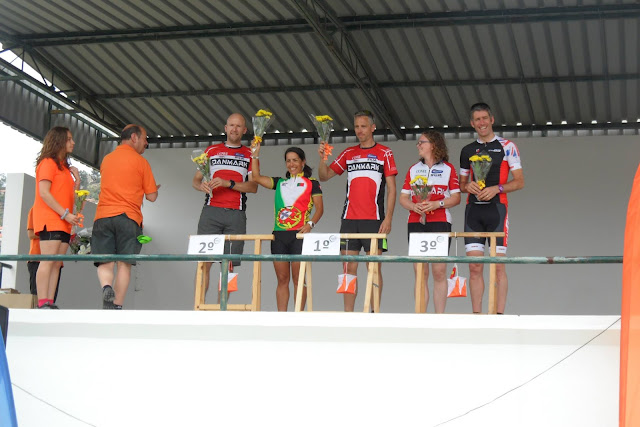 Started today, in an official way, the World Masters MTB Orienteering Championships 2015. Along the streets and sidewalks of Penha Garcia, athletes from 21 countries competed for the world titles in Sprint, showing that the art of biking is for every age. Among the many athletes climbing to the podium, a special word to the Portuguese Susana Pontes, silver medallist in W40 class, and to Monica Aguilera, offering to Spain the first gold medal ever in an event of this level.


Sharing the attentions with this major event which is the European MTB Orienteering Championships 2015, the World Masters 2015 took today its first “serious” competition. For the Sprint race titles at Penha Garcia, in the municipality of Idanha-a-Nova, lined up in the start a total of 146 athletes spread over 15 competition classes, between 40 and 79 years old.

Reviewing the Hall of Fame of this particular competition, we can find here the Danish Lasse Brun Pedersen, World Champion in Sprint (2008 and 2009) or the Swiss Beat Oklé, mainstay of Swiss MTB Orienteering since the first World Championships (Fontainebleau, 2002), as the Finnish Risto Orpana, the British Charlie Somers-Cocks or the German Harald Maennel, constant presences on the highest steps of the podium since the first edition of the World Masters in Gdansk, Poland (2010) .

Looking to the results, a particular attention to the gold medal won by Monica Aguilera in W40 class, the first of Spain ever in a World MTB Orienteering Championships. In this class, the second place was awarded to the Portuguese Susana Pontes, improving clearly the bronze medal achieved in the previous three editions of the World Masters Championships, all of it in the distance of Sprint. Reference also to the tight victory of Beat Oklé over the British Killian Lomas in M45 class, for just 10 seconds apart while in the opposite direction the “fatest” victory belonged to the Swiss Monika Bonafini, in the W60 class, with a lead of 7:06 over the second classified, the British Caroline Dallimore. A note still for the Australian Carolyn Jackson, World Champion in Sprint for the third year in a row.


Full results and other information at http://mtbo15.fpo.pt/.

Posted by Joaquim Margarido at 10:29 pm