Andreas Waldmann: "The gold in the Relay was something very special for all of us" 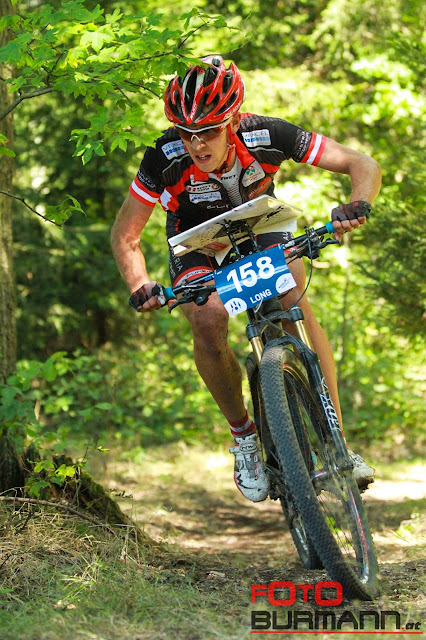 From the Junior World title to the Elite World title goes the time of just one year. Andreas Waldmann - with Kevin Haselsberger and Bernhard Schachinger - made history in Liberec, last August, holding the first place in the exciting Relay that ended the World MTB Orienteering Championships 2015. To the Portuguese Orienteering Blog, the young Austrian athlete remembers that great moment and much more.


The first question is always the easiest: Who is Andreas Waldmann?

Andreas Waldmann (A. W.) - I was born in 1994, in Vienna. I grew up in Vienna, I went to school in Vienna and, at the moment, I study electrical engineering at the Technical University of Vienna. Lots of “Viennas” (laughs).

What came first: Orienteering or bicycle?

A. W. - I always tried lots of sports and spent many time outdoor. Somewhen, at the age of 10, I had my first Mountain bike. I liked riding it but I just did it occasionally. When I was 13, my sports teacher at school took me to a FootO event. Then I became more and more attracted to Orienteering. Firstly I was doing the Vienna's school cup, then I joined my orienteering club, some Austrian Cups in FootO followed and very soon I did my first MTBO course.

Why MTBO? Can you remember the first rides and the very first moment when you said to yourself: “ - That's it, MTBO is my sport!”

A. W. - I really enjoyed MTBO since the beginning, so I kept going on. I was not very fast at that time but also not slow, so I joined the Austrian Youth Team and I started to train on a regular basis. With the time, my training effort and the number of races increased. It was more a floating process, actuallty.

What's the best advice you've ever received? Is there someone that you admire, that you see as your idol in MTBO?

A. W. - There were so many advices I've received, from so many different people. And I'm thankful for every single one of them.

I must confess I was surprised seeing you taking the JWOC's Long Distance gold last year, and even more with such a difference for the second placed (almost seven minutes, as much as I remember). Did you expect it? How did you do that?

A. W. - I still remember the exact time difference: 6:47. Actually, I still have no explanation for that. As 2014 was my last year in Junior class and I had already won a medal in 2013. my goal was definitely to win a medal again. Beforehand, in the Sprint and the Middle Distance races, I felt under pressure. There, I did quite good races and was 6th and 8th. Before the Long distance I talked a lot with the coaches and they managed that I was able to see things very relaxed, which was not easy because I really liked to win a medal. When I started in the Long distance I was able to just concentrate on the course and didn't think on results. And, somehow, this resulted in a brilliant race, free of mistakes!

How was to “jump” to the Elite this season?

A. W. - When I stepped up to Elite I already had some experience in the Men Elite class. Nevertheless I didn't really know what results to expect, so I was pretty surprised when I got 5th in the first World Cup race 2015, the Mass Start in Hungary! To keep it simple, the system in Junior and Elite class is the same: You get a map and you have to ride the course as fast as possible (that's it, isn't it?). The difference is that, in Elite class, you have no chance to compensate a mistake. The time you already lost will prevent you to get a top position - at least this is the way I see it.

What goals have you designed for 2015? How did you prepare for the big challenges?

A. W. - My goal for 2015 was to reach one top-10 result in a World Cup race and to qualify for the Austria Relay's first team. As in previous years, I tried to train according to my plan and reach the peak of my physical and mental shape at the World Championships.

You could get a great 12th place in the Middle Distance of the European Championships. Do you feel happy with the Portuguese campaign?

A. W. - I think this year's European Championships were brilliant organised! The terrains were great and the courses were challenging. It was the first time I've been in Portugal and I liked the Portuguese landscape a lot! I look already forward to getting back there!

And then, the World Championships and that fantastic gold medal in the Relay. I was following the race thanks to the GPS data and I couldn't believe in my eyes, you firmly keeping the first place against two “sacred monsters”, Jussi and Anton. Amazing. I have to say that you, the Austrian MTBO Team, deserve “The MTB Orienteering Achievement of the Year 2015”. I'm talking too much, aren't I?

A. W. - For me it's still kind of a dream that came true. When I started my leg, I knew that we were in a good position but I didn't really think about the current ranking and, until I reached the spectators control, I didn't realise that our team was in the lead! Then I tried to go on like I did on the previous controls and when I punched the last control and saw my teammates, Kevin [Haselsberger] and Berni [Bernhard Schachinger], waiting for me at the finish line... it was just unbelievable!

How important was this medal, in personal terms but also for the MTB Orienteering in Austria?

A. W. - In the Austrian team we have a very good team spirit and the gold in the Relay was something very special for all of us. Personally, I'm very proud on this medal, naturally.

Taking a look on the Austrian MTBO team (athletes, coaches, organizers, federation), how do you see the future?

A. W. - We are all very motivated and working together really well. This summer the IOF elected the Austrian application to organize the World Championships 2018. Of course, that challenge is one of our main goals in the upcoming years for our team.

How do you evaluate the present moment of MTB orienteering worldwide? Are we following in the right way?

A. W. - I think MTBO is developing pretty well. The international competitions' level is very high and it's even getting higher. Also the live-broadcastings like we had this year in the World Championships, in Czech Republic, is a great improvement as well.

Some time ago, we could hear Thierry Gueorgiou saying that “it's in the Winter that you win the medals of the Summer”. Do you agree? How are you planning your winter season?

A. W. - In winter you definitely have to build a solid basis that you can be fast in summer. Naturally it is no guarantee that you'll win any medals, but without winter training you won't have big chances. I will train a lot on the hometrainer and I will also try to do some alternative trainings like cross-country skiing. In addition to that I'll do some weight-lifting and running and maybe I'll go on a trainings camp in the South.

What are your main goals for 2016? Is Portugal in your plans?

What advice do you leave to those youngsters who are starting now in MTBO?