Anine Ahlsand: "I'm glad I have one more year left in the Junior class" 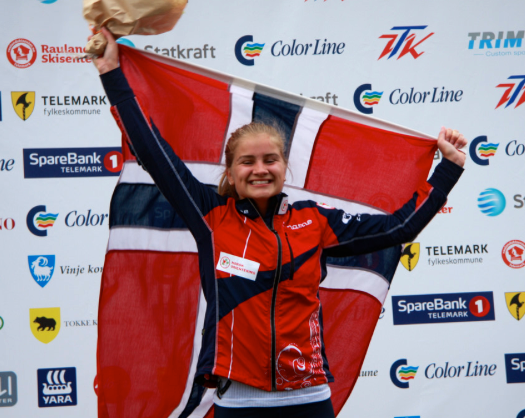 The Portuguese Orienteering Blog keeps on giving word to young athletes. After the recent Interviews with Simona Aebersold, Sara Hagström and Olli Ojanaho - the winner of The Orienteering Achievement of 2015 -, it is now the turn of Anine Ahlsand to be with us, sharing her most joyful memories. Divided between FootO and SkiO, the very young Norwegian has a strong argument to join these two passions: the gold!


The FootO season has finished and the new SkiO season is already there. In 2015, we could see you on top of the Junior World Championships' podium in both disciplines, SkiO and FootO. An amazing achievement, indeed, which put me a delicate problem: Should I point the Interview to FootO or SkiO? But first, let's talk about yourself. Please, tell me who is Anine Ahlsand?

A. A. - I am a nineteen-year-old girl from Oslo in Norway. Currently I live in Trondheim and study civil/computer engineering. I moved here this fall to combine studies with orienteering and skiing. In addition to orienteering, I also do a lot of XC-Skiing. This year I study 50-75% of full time, so I have more time for training. Besides doing sports, I love hanging out and relax with my friends. If you get to know me, you will learn that I am a very competitive person and hate to lose no matter what the competition is (laughs).

I have no doubts about it. So, let's start talking about Ski orienteering. How did you follow the SkiO World Cup's opening round these days, at Ylläs? Had you planned to be there?

A. A. - I thought about going there, but I had to prepare for my exams at home. I also had some XC-races as a part of my plan that same weekend, and I mainly focus on the junior-races in SkiO this year. But I will start my SkiO season this weekend at Sjusjoen in Norway, and I’m excited!

How big is the difference between the Junior class and the Elite class in SkiO? The challenge is mostly related with the physical part?

A. A. - I haven’t competed in the Elite class more than just a couple of times, but I think it is like most sports, where the Elite class is significantly better than the Junior class. Of course the physical part is a bigger challenge, and I also think that the technique should be more stable if you’re going to perform on a high level in the Elite class. SkiO is a small sport, and the Elite athletes probably have a lot more experience and races than the Juniors.

As a Ski orienteer, how did you live those days at Hamar, last February? Did you expect such good results [one gold, one bronze and a fourth place]?

A. A. - The Championships at Hamar was my first international competition, so I didn’t know where my level was compared to the other athletes. Therefore I did not have many expectations beforehand. I was very excited before the first competition, and to compete on home turf was extra fun. Even though I didn’t expect good results, I sure thought about the medals (and dreamed about the gold). After the Sprint distance, where I did a very good race, I could lower my shoulders and just enjoy the rest of the week. The Long Distance was for me a good race, and the Middle was most fun! I had never raced a Mass Start in SkiO before, and I enjoyed the action and duels along the course. I really look forward to this year’s Championships in Austria!

Can you detail the most significant moments?

A. A. - There is one moment I remember as one of the best. After finishing the Sprint, I was very satisfied with my race. But I also knew I had lost almost 30 seconds on the last short loop. I had an early start, so it took a while before the result was final. I remember changing at the stadium after my race and listened to the speaker talking about the split times. After a while could announce that all the medals where won by Norwegian girls, and that was a good moment I remember very well.

Was it a good preparation for the FootO season? How did you “jump” from one discipline to another?

A. A. - Usually I focus only on XC-Skiing during the Winter, and in April I start training towards the orienteering season. This summer was one of my best seasons, and that after I had competed more in SkiO than previous years. I think the SkiO helped me to maintain the focus on the orienteering technique, and of course both SkiO and XC-Skiing keeps my physical shape good during the winter season. I believe that changing my focus from one discipline to another when the season changes, makes me even more focused and excited when the new season comes.

Does your teammates think that SkiO and FootO are very compatible?

A. A. - Yes, they kind of complement each other, so there is no problem doing both. But if I add XC-Skiing to it all, then sometimes it’s a bit too much. It’s important for me to plan well before the season's start, so the total load doesn’t get too hard.

Let's put aside the SkiO for a while, if you agree. When you reached the last month of July and the JWOC, in Rauland, did you feel confident and well prepared? Was running home again an extra-motivation? Tell me about your goals.

A. A. - I was well prepared before JWOC in Rauland. I had been to Rauland and similar terrains several times, and I knew it was a type of terrain that suited me well. I felt confident before the Championships because the terrain is one of my favorites and I knew I could run good races. Two weeks before JWOC, the Norwegian team had a training camp with a lot of good training, so I was also confident about my physical shape. Running home was definitely an extra-motivation. I had a lot of friends and family cheering for me at the arenas, and I must say it helped a lot! I didn’t have any specific goals before JWOC, except doing good races. In a Championships you want to prove how good you are, and in order to do that, everything has to work out. And that was my main goal!

That Middle Distance final was a tight fight, the six first athletes separated by less than one minute. Can you still feel the emotions of that day?

A. A. - Yes, a really tight and exciting race! After the sprint, where I was 23rd, I lost some self-confidence. It was a bad race technically, and my shape wasn’t really good either. I began to doubt my physical shape and wondering if my preparations had gone wrong. In the middle-distance qualification I started out with only one goal: run a good technical race. In my last JWOC in 2013, I ran a good qualification except for two controls, and didn’t make it to the final. This time I knew if I could finish without any big mistakes, I would qualify. I did a good race and finished in 2nd place in my group. This made me believe in myself again and I felt ready for the final. After the qualification I believed that a podium (top 6) was possible if I had a really good day. It turned out to be one of my best days, and I completed a nearly perfect race. It took a while before I dared to believe it when people told me no one could beat me. When I think back at that particular day, it makes me smile, and I even get goosebumps sometimes. And the emotions, I can definitely still feel them!

When you put SkiO in one hand and FootO in the other, which one is heavier? Why?

A. A. - I must be honest and say that FootO is definitely the heaviest. Orienteering has been one of my favorite sports since I was a kid, and I didn’t try SkiO until a few years ago. I really like SkiO, but I spend more time practicing Foot orienteering and therefore it is more important to me.

What are your most important skills and what do you feel that you have to improve in the next times?

A. A. - I think my physical shape is one of my most important skills. I am not a typical runner, but because of all the Skiing I do, I train endurance a lot during the winter and I get strong. I also think I am good at staying focused and relaxed in competitions, and don’t let the nerves take over. I have a lot of things I want to improve! Especially long distances and orienteering in high speed. I also want to improve my top speed, witch will help me in the Sprints.

Are you prepared for “jumping” into the Elite?

A. A. - Oh, not quite yet I think! I'm glad I have one more year left in the Junior class. But of course I’m looking forward to it. I think I will learn a lot in my first years in the Elite class, but still have goals and things I want to improve before I do.

Have you some goals already designed to 2016? How is the preparation season going to be?

A. A. - Yes I do, both national and international. At home, my main goal is to have a good season overall, and I’m aiming for a gold medal in the Norwegian Championships. If I run good races in Norway, I will hopefully qualify to JWOC where I don’t have any result goals yet. If I get to compete in Switzerland next summer, my goal is to be in a good physical shape. I know the courses will be real tough this year, and I think the physical shape will be essential. And if I succeed technically in the races as well, I will be really happy!