Daniel Hubmann: "When you always play safe, you can't win anything" 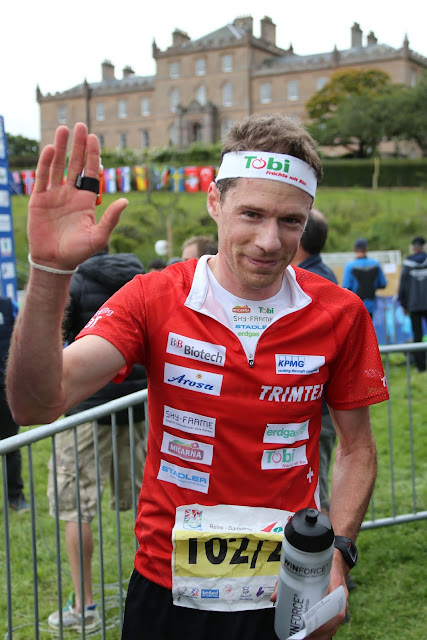 On the Portuguese Orienteering Blog we have with us, today, Daniel Hubmann, one of the most complete and brilliant orienteers of all time. Full of successes over the past decade, his career met in 2015 some of the highest moments so far getting the world titles of Long Distance and Relay, winning the World Cup and achieving the IOF World Ranking's leadership.


We are meeting the end of a great season and your results along the year will be, naturally, an important part of our Interview. But, for now, I would start by asking you about the “gold medal” born on 9th september. How things are going with little Lina?

Daniel Hubmann (D. H.) - Things are going very well with her so far and we are thankful for our little sunshine every day.

What means for you to enter the father's club? What changes you're facing in your sporting life and how does it affects your commitment with Orienteering?

D. H. - It means a lot to me and it's for sure a big step in my life. I have been a professional orienteer for nine years now and I have the feeling that it can also be good for the orienteering part to change the routines a bit and to get some new challenges. The whole organisation around training and competing will be even more important and I also have to set other priorities in some parts, so that everything works well together.

Taking a look over the last months, did you expect, since the beginning, to do such a great season?

D. H. - I didn't really expect it, but when you are training hard all winter, you need to have some goals and dreams. Every athlete knows that a lot can happen and some things you can't influence, but also knows when you always play safe, you can't win anything. Therefore, I'm very happy with my season.

You started the season at Tasmania, with a 2nd place in the World Cup, finishing it with two victories at Arosa, in your home country, in the World Cup's last round. Between the first and the last race, there's a period of time of exactly ten months. Where is the secret of being on top for such a long time?

D. H. - The good thing about the races in Tasmania was that they were held a few months earlier than the other races and I therefore had enough time to get in good shape again until WOC. It might look as if I was on a good level from January until October, but my shape wasn't on that level all the time. Partly because I've planned to have some lows in between, but also because I had some problems with my shin splints in April.

Turning our attention to the World Orienteering Championships, in Scotland, I would like to hear your impressions about the competition. How did you see the gold in the Middle Distance, three seconds over Lucas Basset? And what about the fight in the Long Distance with Tero and Olav and the gold in the Relay?

D. H. - WOC in Scotland started with a frustration - the sixth place in the Sprint. I felt well prepared, but even though the race had not the challenges I had expected, I did a huge route choice mistake. But this made me even more eager to do well in the Middle. It looks like I found the right balance between attacking and doing a very stable race. I didn't have any super leg times but, on the other hand, I managed to run a clean race. Of course I was also lucky winning the race with a three seconds margin only, but for me this was kind of a compensation since I've missed three WOC gold medals by two seconds or less in the past. Winning the relay one day later was something which has been our goal for many years and something many Swiss orienteering fans expected from us. We had tried different tactics and fought many times but we never managed to get it all together. This year everything was perfect for us and it almost was a bit strange that the relay was decided so early.

Having already won two golds took some pressure away from me, but I still started ambitious into the Long Distance race. Since we expected a real orienteering highlight, I really wanted to do well also there. The 2nd place was again a great result, although it hurt a bit when I realised that I even had some chances to win it. However, it was a great WOC for me and I'm very happy about it.

“Great fun to ride with the world's best mountain bikers”, is something that we could read, recently, on your Facebook page. Tell me what other things you intend to do, apart Orienteering, before to start training seriously for the next season? How important is to feel free from maps for a while?

D. H. - This year my “off season” was a bit longer and I didn't really focus on training for six weeks, but it still was a busy time with many meetings with sponsors and other events. As a professional athlete this is also part of my job and I really like to do different things and to meet other people.

Are you planning to fly to Portugal next winter, for a Training Camp? Will you enter the Portugal O' Meeting 2016?

D. H. - I've planned to stay four weeks in Spain and Portugal together with my family this winter. First I'll train in Alicante and in the end also in Portugal, but so far no races are planned. Portugal is always nice because there are so many good maps and the weather is usually better than in Switzerland during the winter months.

You have the Middle Distance European and World titles to defend, as the World Cup winning overall and the IOF World ranking leadership. Will it be possible to achieve all that in 2016? Are those your main goals for the season?

D. H. - Starting in all these events as a defending champion is nice, but it doesn't help me much next season. My main focus will of course be on the international races like EOC, WOC and World Cup. These are already several races and there will be a lot of traveling again, which is not that easy to combine with family life. I might therefore skip some other races, such as Tiomila or Jukola, in order to get some free space in between.

For those who see Daniel Hubmann as an example, an inspiration, specially for the young athletes, what is your advice?

D. H. - Train hard, but never forget to have fun too. You need to know when to be serious and when not. I usually have some time for funny things in training camps, for example in 2012 in Portugal [HERE].