Raquel Costa and Tiago Aires: "We are better cartographers now" 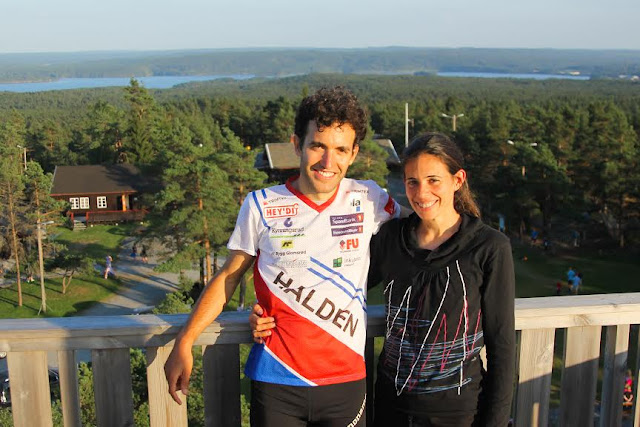 Whatever the list of the Portuguese orienteering's most important personalities in the recent years, the names of Raquel Costa and Tiago Aires will be there, surely. To the high quality as athletes, they gather the pleasure and the will to share experiences and knowledge, which turn them into high values in the World of orienteering. Adding to this the professional quality in the Cartographic field, we have enough material for an interesting and enriching Interview.


2015 came to an ending with the After Christmas Training Camp, an initiative of your portuguese club, GafanhOri. How do you rate the event?

Raquel Costa (R. C.) - I think it was very positive, not only because of the 150 entered athletes but also for their feedback. We are conscious of the work and quality behind this Training Camp and, those who had been with us understood that and will return next year, certainly, bringing with them some other participants. We believe that this Training Camp concept has fully conditions to point out the beginning of the new season, not only for the Portuguese but for several other countries' athletes. Proving it is the presence of many Spanish athletes, exactly 25, from the National Junior and Elite teams. You may see the maps, photos and further information of the After Christmas Training Camp's two last editions at http://afterchristmas.weebly.com/.

How important are the Training Camps in Portugal, this time of the season?

Tiago Aires (T. A.) - The Training Camps, from January to March, are really valuable to Orienteering and to our country, although it's my opinion that we are underestimating its potential. There are few sports having in Portugal, for two or three months every year, their epicenter, receiving the visit of world's best athletes for a long period of training and holding competitions in challenging maps and a mild weather. This phenomenon should stimulate the creation of instruments managed by the Portuguese Orienteering Federations, in order to facilitate to our visitors the acquisition of maps, booking accommodation, providing information, answering questions, etc.

The search for places in Spain is improving again and there are some “emergent” countries, namely Turkey, that start being highly demanding for this kind of activities during the winter season. Is Portugal, still, the Mecca for orienteers from all over the World or are we lagging behind?

T. A. - I don't think that Portugal has ceased to be the Orienteering's Mecca in the beginning of the season, but we must understand as natural this searching for new destinations. An orienteer is as best athlete as bigger is his/her capability of adaptation to new terrains. Fortunately, Portugal has several different terrains within a small and easily accessible area. Mountains in the North, sand dunes and pine forest by the sea, the Alentejo, a vast region with really fast and detailed terrains, the Viseu's region, with a lot of high quality forest terrains and the Algarve, where is possible to find ideal training conditions because of the gentle weather in this particular region all over the year.

Looking back to 2015, there was a very special moment. I'm talking about your stay in Halden and the start of a new project under the colors of a new club. How did you deal with the change?

R. C. - I would say that moving to Halden and living in a different country for five months wasn't difficult. We didn't feel the culture shock, mostly because we were lucky by knowing some athletes and coaches there in the same condition, displaced from their original countries and with whom was possible to establish a close relationship. It was a really interesting and enlightening project in several ways. We've been able to work, training and competing in, probably, the best Orienteering club in the World. Halden Skiklubb has more than 700 affiliate members and its a club that breathes orienteering for decades. A big number of orienteering's prominent names, currently and from the past, live in Halden.

T. A. - I would highlight, also, the fact of receiving regularly feedback about our work from some of the best athletes and coaches. It was, absolutely, very stimulating to our improvement. About the way how the club works, it is interesting to watch and take part on the club's routine. As an athlete, it was really rewarding to be able to participate regularly in the club's trainings and competing in nordic terrains.

I believe that your stay in Halden was mainly related to map making. How challenging are the nordic terrains to a cartographer?

R. C & T. A. - We feel that we are better cartographers now than we were when arriving to Halden. We are talking, mostly, about details , insignificant for the common athlete but really important because of its connection with the map reading and its legibility. To be able to work with base maps, by using a laser scanning system (LIDAR) with an incredibly huge quality, was also a very interesting experience, also because of the working production of our own base maps.

Have you one or two curious episodes about the life and day of two Portuguese cartographers in the Norwegian forests?

R. C. - In the forests we hardly find a funny episode. It's a space of quietness where, sporadically, we can meet one person walking or running and some deers, foxes or elks, trying to escape from our views. On the contrary, in the urban areas, where we also produced a map, the inhabitants called the police to identify me. They probably noticed my specially dangerous presence and my terrifying look (laughs).

Could you mention the season's highest moments in terms of your participation in competitions?

T. A. - The peak of the season was expected to be the presence in the World Cup stage in Halden and the World Championships in Scotland. Unfortunately, the week before leaving to Halden, I fall down during the Portuguese Championships and had to stop running for three months. By the way, I would like to thanks to Dr. Armando Soto, chiropractor in Halden, that restlessly took care of me and did everything to help me to fully recover. After that, I confined myself to take full advantage of the maps around Halden, without a specific training plan. So, the highest moments were the participation in 25 Manna and the Blodslittet. The presence in the Night Hawk (a six athletes relay in Norway) and the 25 Manna (a 25 athletes relay in Sweden) were really fun. I can't say they were high moments in terms of results or performances, but it was something different and new for me. Absolutely!

How did you follow “from the outside” the Portuguese presence in the World Orienteering Championships?

R. C. - Knowing the non-existing conditions to prepare the WOC in a very specific terrain as we find in Scotland, unable to meet similar terrains and without a regular presence in some major international competitions, I would say that the results reached by the Portuguese are normal, within the expected.

And what about the WOC overall?

T. A. - Proudly and emotionally, I would highlight the Spanish Andreu Blanes' 7th place in the Sprint Final. Like the Portuguese, the Spanish athletes are the perfect example by how, with few conditions but tons of courage and dedication, to get far away. I believe Antonio Martínez and Andreu Blanes are important pieces by inspiring athletes from all over the Iberian Peninsula to reach their goals and being a great help to a really motivated new generation.

Your work in recent years as coaches and the good results achieved by the Portuguese youth teams under your command are a real “trademark”. How do you evaluate the Portuguese Orienteering's present moment, particularly about the youngsters?

T. A. - We can only ask more and better to our athletes if we are able to improve their conditions in terms of preparation and planning. So, it's indispensable the necessary sensitivity and, of course, financial support. Looking to our reality, I think the only way to change the current paradigm is to deeply modify the way the Portuguese Orienteering Federation works and set new goals based on a new global long term in strategic planning.

A new season has already started and, with it, some new challenges, I believe. Will you continue your work in Halden?

R. C. & T. A. - We have, as usual, lots of working demands in Spain and France during 2016. And, joining it, we have once again the interest of Halden SK, this time for the production of the Norwegian Championships 2017's maps. Unfortunately, we aren't able to work the whole required area in Halden. We are also interested, the best possible way, to keep our commitment to the Portuguese orienteering's development, through map making, organizing events and other local projects.

T. A. - Professionaly, the biggest projects are the Norwegian Championships 2017, the Portugal O' Meeting 2017 in Crato and Portalegre and some other maps in the Iberian Peninsula. As athlete, I would like to participate in the WOC in Strömstad, Sweden, compete whenever possible in the Portuguese League, participate in the ATRP Trail Circuit and run some Mountain Trails.

R. C. - In 2016 I want to continue doing orienteering, running some events and embrace some new challenges.