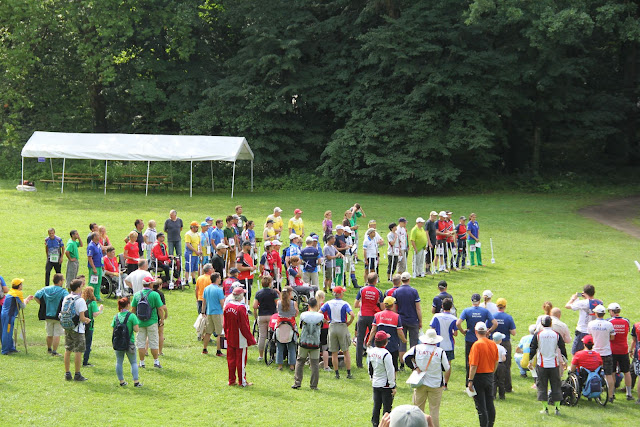 You don’t need to be particularly familiar with Orienteering to realise that, despite it being the most fantastic sport in the world, it has a huge Achilles’ heel which is called “visibility”. And yet there is a format that erases, in a certain way, that difficulty: it’s called a Relay and it’s commonly seen as the “Orienteering Big Party”. And for obvious reasons. First, because of the mass start, then the athletes’ contact at each leg change, and finally the emotion of congratulating the winner as the one who comes first. Everything in terrain with good visibility, a vibrant atmosphere in the arena and an enthusiastic audience. As simple as that!

Along the way, many people have made a contribution to the development of the TrailO Relay, but it is generally accepted that Martin Fredholm from Sweden is the person responsible for putting the ideas together and working out the final format. So we asked him to tell, in brief, what the TrailO Relay is all about. “The TrailO Relay is a combination of the two existing formats in TrailO: PreO and TempO. Each one of the three legs starts with a PreO course with 10–15 controls. After the changeover, each leg also has one or two TempO stations. The final result for each team is the sum of the time spent for each leg at the TempO station(s), plus any penalty time on the TempO part (30 seconds for each incorrect answer), plus the penalty time on the PreO part (60 seconds for each incorrect answer). Each team has a combined maximum time allowance for the PreO part that can be freely distributed between the legs”, he says.

The TrailO Relay isn’t something that was simply thought up overnight; it has been developed over many years. In Sweden, the first stand-alone team competition with forked courses for each leg was organised in 2004. It was more like a PreO Relay, since the final result was based on points and seconds as in a regular PreO competition. The first time we could follow this kind of race with a combined maximum time for each team and the result converted in seconds was in 2008 in a TrailO Relay during Tiomila. Until then, all competitions had used a forking method where competitors had to solve the same control tasks. But in 2011 a new forking method was tested in Sweden.

Basically it consists of a number of controls divisible by three, where each leg has to solve about one third of the controls, but never the same control. The event is still a PreO Relay, since both points and seconds are combined in the final result, but since 2012 this has been the only forking method used in Sweden. The idea to make it a TrailO Relay (the final result only in seconds) instead of a PreO Relay (points and seconds) actually came from the Trail Orienteering Athletes Commission, where the Finn Lauri Kontkanen is a member. The IOF Trail Orienteering Commission accepted that idea, worked out the draft rules in January 2015 and finalised them a few months later. During WTOC 2015 in Croatia the competitors had the chance to try out this format, and some minor problems were found (easily solvable), but the feedback was very positive. For the story let’s say that the first unofficial TrailO Relay World Champion country was Sweden, followed by Finland and Italy.

At a time when the first official competition is approaching, Martin Fredholm has his own ideas: “The TrailO Relay can be interesting if it is organised properly. The old forking method does not require much strategy, only how to use the maximum time. With the new method, team members on the first legs have to choose which controls to solve and which to leave for the other team members. And if the title in the end comes to depend on the outcome of the TempO part in the third leg, you have to decide which team member can best cope with the pressure that creates”, Martin says. Another interesting possibility offered by the TrailO Relay is the opportunity to show ‘live’ results. Martin, again: “Spectators can follow how everything progresses. For example, which teams have already solved the ‘difficult’ controls. And with a properly organised secretariat, each individual result will be posted in less than 5 minutes after the competitor has arrived at the finish.”

Martin’s last words go along with a good laugh: “My expectations for next year’s Championships are that I will be in one of the winning teams”, he concludes. 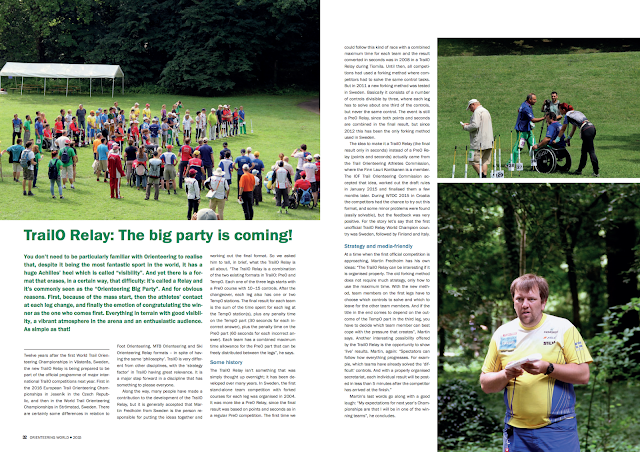 [Text and photo: Joaquim Margarido. See the original article on Orienteering World's last issue at http://orienteering.org/wp-content/uploads/2016/02/iof_orienteering_world_w3.pdf, on pages 32 and 33. Published with permission from the International Orienteering Federation]