ESOC 2016: One day after the silver, Lamov and Trapeznikova reach the gold 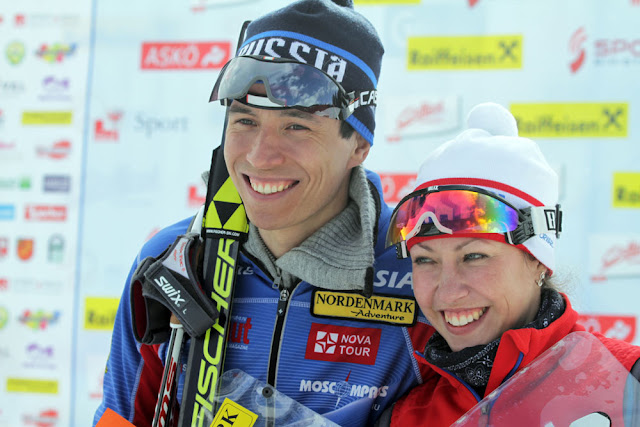 Andrey Lamov and Alena Trapeznikova offered to Russia the European title of Mixed Relay, in a tough race held this morning in Obertilliach, Austria. The following positions were occupied by Sweden and Norway.

One day was enough to Andrey Lamov and Alena Trapeznikova ceased to be “the first of the last” to go to “the first of the first”. Deconstructing the charade, after having take the silver in the Sprint race that opened the 9th edition of the European Ski orienteering Championships, the two Russian athletes formed the winning couple in the Mixed Relay race that filled the ESOC’s program today. A title that meant, to Russia, recovering the top spot in this distance (after wins in 2012, 2013 and 2014, followed by the 4th place last year in Lenzerheide, Switzerland), having also the sweet taste of novelty for Lamov and Trapeznikova.

With the female members of each team skiing on the first leg, the equality was the dominant note. But the biggest surprise was reserved just for the initial moments, with the super-favorite Sweden losing more than a minute and a half to the front group, thanks to the unhappy performance of Tove Alexandersson. Constituted by Andrey Lamov and Alena Trapeznikova, the Team Russia 1 took the command of the operations in the first half of the second leg, managing to keep it till the end. In this and the next legs, the Swedish were able to shorten to 33 seconds the difference to the Russians, but wouldn’t go beyond that.

If it’s true that the relative positions of the top two were perfectly defined at the entrance to the 6th and final leg, is no less true that the fight for the bronze medal was red hot. Finland and Norway leave for the decisive leg in third place with the same time, with the Czech Republic, Bulgaria and Switzerland few seconds away. Oeyvind Watterdal would be the strongest within this particular group, offering the third place to Norway. Lamov was the winner in 48:37, while Ulrik Nordberg took the second position with more 1:10. Finished the race 14 of the 15 teams that lined at the start, with the home team, Austria 1 (Anna Nilsson Simkovics / Johann Kugler, reaching the 10th place.

ESOC continue tomorrow with the Middle Distance Mass Start. All results and further information at www.skio2016.at.

Posted by Joaquim Margarido at 5:16 pm