10MILA 2016: Södertälje-Nykvarn OF got the Men Relay's victory 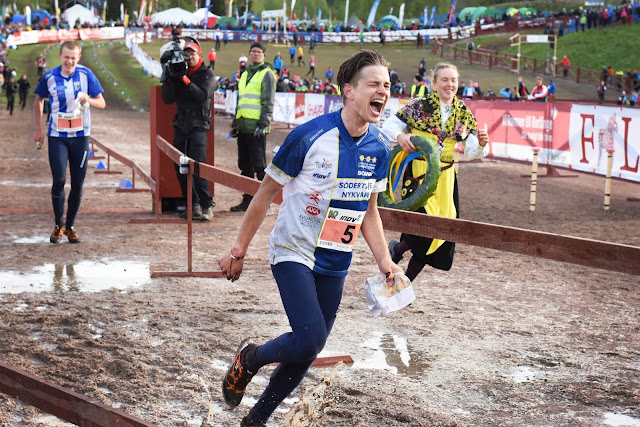 With the echoes of OK Pan Århus' victory in the Women Relay still sounding everywhere, 341 male teams were vanishing through the forest for the longest night. Ten and a half hours later, with thousands of adventures in between, Jonas Leandersson would be the first to cross the finish line, giving to the Södertälje-Nykvarn OF team its sixth victory in the mythical Relay's history.


Its 8.30 pm and the night falls on Falun, about 200 km northwest of the Swedish capital, Stockholm. The main focus of the world of Orienteering is here, in what will be the 71st edition of 10MILA, classical Men Relay that joins every year, since 1945, the world's best teams. Once again, the competitors were present at the start for 10 decisive, unpredictable and exciting legs through all night. Although the final result of each team is the combination of strengths and weaknesses of the individual performances - and here, for very good or very bad it can be, every moment counts - the truth is that the last leg was the decisive one. But the story of this edition of 10MILA is made from the sum of the parts, and it's possible to highlight some really interesting moments.

The first intense moment was, of course, the start, with 341 teams fighting for the best possible result since the beginning. The first finisher was the Spanish Antonio Martinez Perez, from the Norwegian team of Halden SK, doing the best time in the initial leg. Fredrik Edén would be first on the second leg, showing that IFK Göteborg was in Falun to hardily defend the amazing victory achieved last year. At the end of the third leg, Lillomarka OL was in the lead, with an advantage of almost two minutes over the second placed, but in the end of the fourth leg everything changed and Södertälje-Nykvarn OF was in the lead, after another great performance from a Spanish athlete, Andreu Blanes Reig. Erik Liljequist enhanced the Södertälje-Nykvarn OF team's advantage, which was higher than 3 minutes after the 5th leg.

Södertälje-Nykvarn OF athletes were able to keep the lead during the next three legs but, in the end of the 9th leg, it was Kalevan Rasti who took the first place, with Thierry Gueorgiou starting for the last leg with an advantage of 3 seconds over Jonas Leandersson (Södertälje-Nykvarn OF) and 1:55 over Eskil Kinneberg (IFK Göteborg). With four and five minutes, respectively, to the lead, IFK Lidingö SOK and Koovee were almost definitely out of the podium. The fight between the three first teams was incredible, with Eskil Kinneberg performing amazingly, managing to reach Leandersson still in the first half of the leg and then catching Gueorgiou and taking the lead. The difference between the three athletes would remain in a few seconds and the corridor to the finish was, once again, the place of all the decisions. The strength of youth was against Gueorgiou and Leandersson was faster than Kinneberg in the final metres. Eleven years later, Södertälje-Nykvarn OF recovers the 10MILA sceptre!

For further information, please visit the event's webpage at http://www.10mila.se/index.php/en/.

Posted by Joaquim Margarido at 10:57 am

Email ThisBlogThis!Share to TwitterShare to FacebookShare to Pinterest
Labels: 10Mila, International, Södertälje-Nykvarn OF