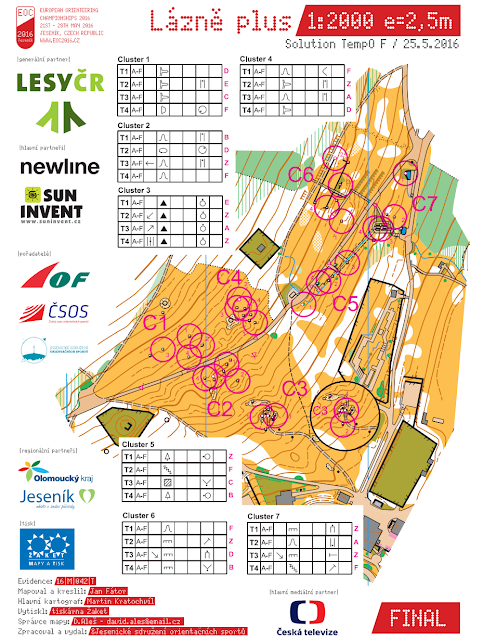 “TempO is about balancing the speed and the risk of a wrong answer”, says Antti Rusanen, the current World Champion. And so it was, once more, in the Czech Republic, during the European Trail orienteering Championships. In a really tough Final, a few did right. All the others, didn't!


Now that the European Trail Orienteering Championships ETOC 2016 came to an end, still time to look on the event. Today, the Portuguese Orienteering Blog analyzes the TempO competition, looking on the detail that makes the difference.

The competition took place on wednesday, 25th May, with two Qualifying Heats in the first part of the day and the Final in the afternoon. 87 competitors entered to the Qualifying stage, with the 18 best in each Heat reaching the Final. Comparing the Qualifying Heats' results to those registered in the last World Trail Orienteering Championships, in Croatia, one can notice that 16 competitors repeated a presence in the Final. Bronze medalist in Zagreb, the Norwegian Sondre Ruud Braten was the big absent, but Edgar Domingues, Portugal, Emil Kacin, Slovenia and Dmitry Dokuchaev, Russia, also missed the Final. Out of the big decision by 3,5 seconds, Dokuchaev deserves the “unlucky guy” prize. With seven competitors in the Final, the Swedish team was the most represented one, followed by Finland with five competitors, Italy, the Czech Republic, Norway, Slovakia and Portugal with three competitors each, Latvia, Great Britain and Hungary with two competitors each and Ukraine, Denmark and Russia with one competitor each.

The first Cluster turned out to be the most difficult. It was here that the competitors showed more difficulties to solve the four tasks, with an average time of 44 seconds and more than 50% wrong answers. Only three competitors did a clean cluster, with the Norwegian Martin Waaler joining speed and accuracy, assuming the lead. Martin Fredholm, Sweden, and Krešo Keresteš, Slovenia, were the two other competitors answering fully right. Erik Lundkvist, Sweden, Anna Jacobson, Finland and João Pedro Valente, Portugal, missed all the four tasks, which proved to be fatal for the rest of the course. The Slovakian Ján Furucz missed three tasks. The Portuguese Inês Domingues did two wrong answers, as much as Marit Wiksell, Sweden and the 13 y.o. Czech Daniel Locker.

Easier than the precedent, the Cluster 2 registered 31 seconds of average time in giving the four answers and 19 overall wrong answers out of 144 (13% of wrong answers). Zoltán Miháczi, Hungary, and Erik Stålnacke, Sweden, were the fastest and the most accurate, with 18 seconds total time. The slowest was Tom Dobra, Great-Britain, with 59 seconds, and the less accurate, with two wrong answers, were Martin Waaler, Alessio Tenani, Italy, Dušan Furucz, Slovakia, Johanne Biering, Denmark, Magdalena Kurfürstova, Czech Republic and Jari Turto, Finland. Martin Fredholm, Sweden, reached the lead in a table were eight competitors could keep a top10 position. New in the standings, we find now Zoltán Miháczi and Inês Domingues.

The third Cluster was definitely the easiest. The competitors answered here more quickly than the other six, with an average time of 26 seconds, and also the average of wrong answers was the lowest, staying in the 10%. Lauri Kontkanen, Finland, and Sigurd Dæhli, Norway, were the fastest, with 17 seconds, while the slowest was again Tom Dobra, with 45 seconds. Dušan Furucz was, once more, the less accurate, missing three tasks, with Daniel Locker being the one in the top10 missing one task. So, Locker stayed out of the top10 standings, and so Martin Waaler, changing places with Remo Madella, Italy, and Stig Gerdtman, Sweden. Martin Fredholm was about 20 seconds slower than the top competitors and lost the first place, which was occupied now by the Norwegian Martin Jullum.

With the fourth Cluster, the competitors reached the competitions' middle. From now on, every Cluster will prove to be more difficult than the precedent, not just because of their technical challenge, but also because of the psychological part. Every second is now more than just one second and a wrong answer would mean a step back towards the top places. In this Cluster, the average time increased to 31 seconds and the average of wrong answers was 15%. The Russian Dmitry Kucherenko was the slowest with 50 seconds and the Ukrainian Vitaliy Kyrychenko and Magdalena Kurfürstova missed three tasks, being the less accurate. Zoltán Miháczi and Krešo Keresteš were the only missing one task. Being the fastest, Martin Jullum confirmed the leadership. The Czech Pavel Kurfürst was, along with Martin Waaler, the second fastest, reaching the third position overall. Kontkanen is now second, between Jullum and Kurfürst. Fredholm, Domingues, Madella and Mihaczi follow the leaders. After a sensational recovery, Ján Furucz joined the top10 list for the first time. He is the World Vice-Champion and still has a word to say!

The Cluster 5 proved to be terrible to Lauri Kontkanen, missing here two tasks. This was a Cluster with also 31 seconds of average time, but with the average of wrong answers increasing to 19,5%. Ján Furucz was unstoppable and got the fastest time with 17,5 seconds. He's now the fourth placed after Martin Jullum, Martin Fredholm and Pavel Kurfürst. Domingues and Madella keep their relative positions, being fifth and sixth, respectively. In the eight position, Pinja Mäkinen, Finland, is a novelty in the top standings. In this Cluster, the slowest was again Dmitry Kucherenko. With three wrong answers, Anna Jacobson and Magdalena Kurfúrstova were the less accurate.

Sixth and penultimate Cluster. The tension is hot, hot, hot and the third problem to solve shows to be a real jigsaw puzzle. Just seven out of thirty six competitors were able to solve it correctly and Lauri Kontkanen was one of them. Other was Pavel Kurfürst. Jullum keeps the first place, but the difference for the second placed – which is now Kurfürst – was reduced to 20 seconds. Martin Fredholm is still in the medals and Furucz keeps the fourth place, 21 seconds behind Fredholm. Kontkanen has the same seconds as Furucz and Inês Domingues is now sixth, 23,5 seconds far from a medal. The average time in this Cluster was 32 seconds and there was 26% of wrong answers. The less accurate was Martin Waaler, missing three tasks, and the slowest was João Pedro Valente, with 57 seconds.

Looking on the precent leading table, one understand that anything can happen. The seventh Cluster has the particularity of being a spectator one, increasing even more the pressure. The competitors need nerves of steel to reach their goals and everyone knows that missing one single task would mean an irreparable failure. This Cluster would prove to be the second more difficult, with 41 seconds of average time and 30% of wrong answers. In the particular fight between Kurfürst and Jullum, the Czech won. Jullum missed the third task... and the gold medal! The third place would be closely contested, but Martin Fredholm missed two tasks (he'd just missed one task until now), falling to the final eight place. Inês Domingues also missed two tasks, staying out of top10 – she was the only top competitor answering wrong to the last task.

Ján Furucz finished third and Zoltán Miháczi – the fastest along with Daniel Locker – was fourth. Michele Cera and Pinja Mäkinen also did a clean Cluster, finishing fifth and sixth, respectively. Remo Madella's missing in the third task meant the seventh place, instead of the fourth one. This time, the slowest was Dmitry Kucherenko, with 76 seconds and was also the less accurate, along with Johanne Biering and Magdalena Kurfürstova, with three wrong answers. Overall, Michele Cera and Pavel Kurfürst were the most accurate, with two wrong answers. With three wrong answers there was three athletes: Martin Jullum, Pinja Mäkinen, Martin Fredholm and... Tom Dobra. But Dobra was also the slowest overall, with 376 seconds, which explains his 23rd final position. 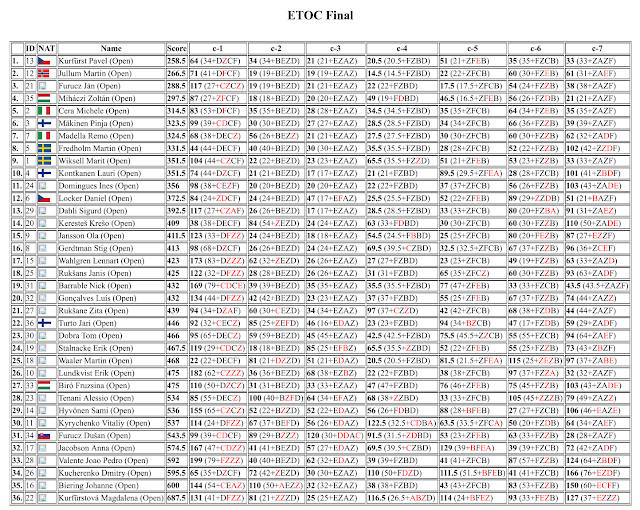 Posted by Joaquim Margarido at 11:58 am