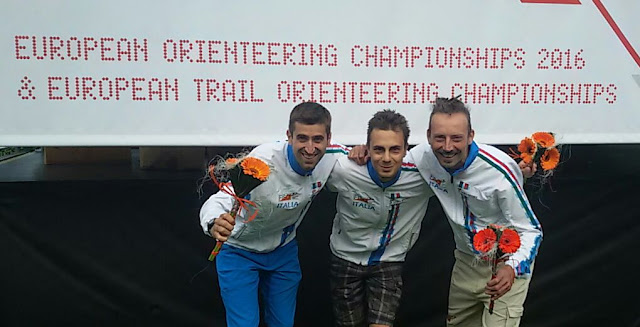 
The European Trail Orienteering Championships ETOC 2016 started today in Lazně Jeseník, Czech Republic. Representing 16 different countries, 34 teams of 3 members each took part in a brand new competition format, with a TrailO Relay being officially part of an IOF event's program for the first time ever. But the day was also memorable for some other reasons, namely for the use of SPORTIdent to validate the answers and the opportunity to follow live the event from home. (Unfortunately things weren't as good as they should be with the results, putting everybody on the verge of a nervous breakdown).

In the Open class, Italy showed once again how talented are its trail orienteers, reaching the gold with 557,5 seconds overall. After the bronze in WTOC TrailO Relay (unofficial) last year, in Zagreb, Remo Madella, Michele Cera and Alessio Tenani were unbeatable today, leading the race from the beginning and finishing with a big advantage over the concurrence. Facing really demanding tasks, none of the 102 competitors achieved a clean race in the PreO part and some of them performed far below the expected, like the Swedish Lennart Wahlgren or the Finnish Pinja Mäkinen, with five mistakes each. In the end, Sweden with 730 seconds and Slovakia with 765 seconds reached the remaining podium places. With a team of “rookies” – it was Grigas Piteira’s debut and the brothers Ines and Edgar Domingues had here their second international experience -, Portugal achieved the fourth place, 5,5 seconds better than Norway and 9,5 seconds faster than Finland.

In the Paralympic class, the team of Sweden confirmed its favoritism and achieved the gold after a tight fight with the Czech team. Jana Kosťová and Ola Jansson played the final face-to-face, but both performed similarly in the last Timed Station and the Czechs finished 19,5 seconds after Sweden. The team of Russia took the third place, with more 250,5 seconds than the winners. Looking for the final standings, the disappointment’s note goes to Finland and its 6th place in the Paralympic class. Also Croatia, Ukraine, Latvia and the Czech Republic were far below the expectations in the Open class.

Posted by Joaquim Margarido at 8:09 pm