Took place this morning in Wroclaw, the first part of the FootO World Cup 1st round's second stage, with the Sprint qualifying heats. With three winners in the four races - Daniel Hubmann, Matthias Kyburz and Judith Wyder -, Switzerland was at the highest level. The remaining winner was the World Champion and current leader of the IOF World Sprint Ranking, Maja Alm.

In the Men Elite class, the Swiss Daniel Hubmann and Matthias Kyburz won their respective qualifying heats. Hubmann left the New Zealander Tim Robertson at 12 seconds while Kyburz had a hardest task, with a 4 seconds winning over the Swedish Martin Regborn. In this heat there was three athletes ranked 20th with the same time, with the Spanish Antonio Martinez, the Russian Gleb Tikhonov and Norwegian Gaute Hallan Steiwer getting their tickets to the final which will count on the presence of 42 athletes from 13 countries. With nine athletes, Switzerland is the most represented country in the final, followed by Sweden with 8 athletes and Finland with 5. Rafal Podzinski will be the only Polish athlete in the final.

Sprint World Champions in 2014 and 2015, respectively, the Swiss Judith Wyder and the Danish Maja Alm won their heats, and will be the last two athletes starting in the final that will take place within a few hours. Both athletes achieved a comfortable margin of 30 seconds over their closest opponents, the Finnish Venla Harju and the Ukrainian Nadiya Volynska. Finland and Sweden, with seven athletes each, and Russia and Switzerland with six, are the countries most represented in the final, which will count on 40 athletes from 13 countries. The home team will have in Hanna Wisniewska its representative in this final. 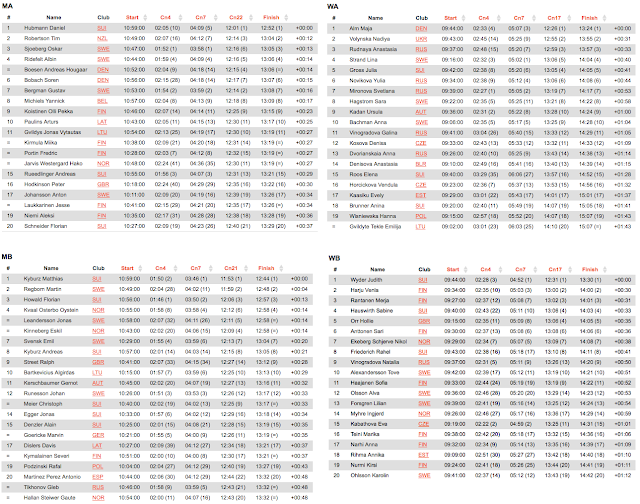 Provisional overall results can be seen at http://liveresultat.orientering.se/followfull.php?lang=en&comp=11491.

Posted by Joaquim Margarido at 11:29 am