Jana Kosťová: "Any position in top 6 would be a great success" 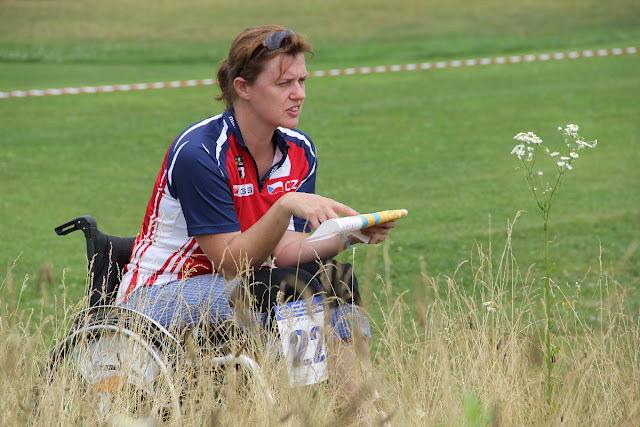 On the day ETOC 2016 kicks-off, the Portuguese Orienteering Blog is pleased to present the event through the eyes of one of the TrailO's greatest personalities. Sometimes vibrant, sometimes contained, Jana Kosťová speaks of herself and looks ahead to one of the biggest events of the year in this challenging discipline.


For TrailO’s lovers, each competition is a party. However, I believe that an event of this magnitude, especially being played home, is anticipated with some really special vibes. How did you deal with your emotions the days and months before the event?

Jana Kosťová (J. K.) - Oh, don't talk about vibes! Thanks to my workload, I have had a really good time in the spring but not exactly 'trail oriented'. I didn't have a moment to think about ETOC, to get nervous too early. But all of that is past and I must admit that, right now, I feel just a little bit apprehensive.

I really believe that our people (at least Tomáš and Pavel together with the Event Advisers) will do their best to prepare good competitions. And that all European trail orienteers will really enjoy it. Last year Tomáš tested his idea of electronic punching for pre-o and it worked very well. The speed of the results was beyond trail-o belief (!!). So I hope it will all work well as it did last year and not only that we will experience interesting courses of which he is capable, but we will be really enjoying immediate results. At least in pre-o. We are testing Ant here as well, so far successfully, but this will not be involved in ETOC.

How did you prepare yourself for the European Championships?

J. K. - Well, this is probably the big reason for being so nervous. We haven’t had many competitions here during this season, and I've been doing online TempO tasks to get ready and studying old maps and courses set by Tomáš. Let's hope it will be enough.

According to your goals, at what level is your self-confidence right now? Are we going to see you climbing again to the top of the podium, like you did in Vuokatti, in 2013, when you’ve been crowned World Champion?

J. K. - Since Vuokatti, my goal has been to get an ETOC medal. Especially when it's organised 'at home' - one feels the duty to win something, right? But I know there are many other competitors who wish to win a medal from ETOC too, and the medals are only three (laughs). I'll certainly do my best, but the question is if my best is going to be good enough to reach the podium.

What kind of European Championships can we expect?

J. K. - It will be a joint Championships and I’m looking forward to that. I personally really enjoy being part of a bigger party and a fan of our foot orienteers. But when I checked the programme I quickly realised that we'll not have many opportunities to watch the FootO finals in the arenas. But let's see how it works during the Championships.

We can expect nice and challenging terrains in really beautiful part of the country. I'm sure Tomáš will use the best of it. We’ve been there a couple of times in the past, having competitions in surrounding areas. But the limestone and the other areas used for ETOC are unknown territory for me. I expect a lot of contour lines reading and counting trees (laughs).

Otherwise I am worried that we will be in FootO's shadow. Let's see how deep the shadow will be. Judging from the website as it is now, I would say that ETOC this year doesn't exist! It's a bit complicated to get the information that there are two Championships organized. Hard to get relevant information about terrains for example, older maps, updated information. You need to go to Bulletin to learn a bit more. ETOC is not being promoted anywhere - have you seen any info on facebook, for example? Last year it was a totally different story. My only - and I must say good - experience so far was with people involved with accommodation - they tried hard to meet our needs (wheelchair needs especially). I would like the EOC organisers to understand that the conditions for ETOC's success are not just about hotel room accessibility or the quality of the courses.

Once, you've been asked about TrailO's hardest part and your answer was something related to “getting into the course planner's mind, to assess from the very beginning his zero tolerance”. How is the ETOC's course setter Tomáš Leštínský's mind? Would you like to share your guesses about the kind of problems that we'll face?

J. K. - During recent years we have had several chances to experience his style. So we all know that he's generally using good maps that we can rely on. Also, he likes clever tricks. And - last but not least - he likes orienteering, so his competitions are mostly about orienteering. My (now already public) wish is that I'll be able to understand his course planning as I did last year in the final round of the European Cup in Trail Orienteering (laughs).

The official debut of the TrailO Relay will take place in Jesenik. What do you think about this new format and the chances of a gold medal for the Czech Republic Paralympic team?

J. K. - Well, Paralympic team of the Czech Republic will be divided into relay teams on spot only. Let's see how we manage in the tough competition with Sweden, Russia, Finland,..  we are missing some good names in the team and it won't be easy.

The format of the Relay is very fresh, there were only couple of opportunities to test it and I think it's still too early to make it official part of the Championships. But it's here so let's fight.
Personally, I like the Relay format - a combination of TempO and PreO tasks; and I like that it is separate competition. What I don't like and for what I preferred team competition is that it again divides Para and Open competitors. I would prefer a discipline combining both classes, both disciplines (TempO and PreO) and, on top of that, will contribute to the reasoning for developing TrailO - the integration. Such format would also allow including Para competitors to countries which have problems to bring enough Para competitors for one Relay team.

In what way may the ETOC 2016 be really important for the Trail Orienteering in the Czech Republic?

J. K. - That is a good question and you’re addressing the wrong person (laughs). In the Czech Republic we are getting a bit of support from the Federation. It could be better but it could also be worse. At certain point I thought this relationship between Federation and TrailO is improving. Since 2016 we are officially part of our Federation, having our own section in there - definitely a move! However, now seeing the situation with E(T)OC - it makes me a bit sad...

The season doesn't end here and, within three months, will take place in Stromstad the World Trail Orienteering Championships. If I gave you to choose between being European Champion in your own country or World Champion in the far Sweden, what would you choose?

J. K. - I uncovered one already, a few lines above (laughs). I would also like to wish all competitors a really enjoyable and fair competition! And then I would like to wish the organisers good luck. You can get ready - 200% - but, as an organiser in my business life, I know that almost every time something goes wrong and you simply cannot prevent it. Some luck is necessary too!