Anton Foliforov: “I face each new race, each new challenge, with a single goal: to win!” 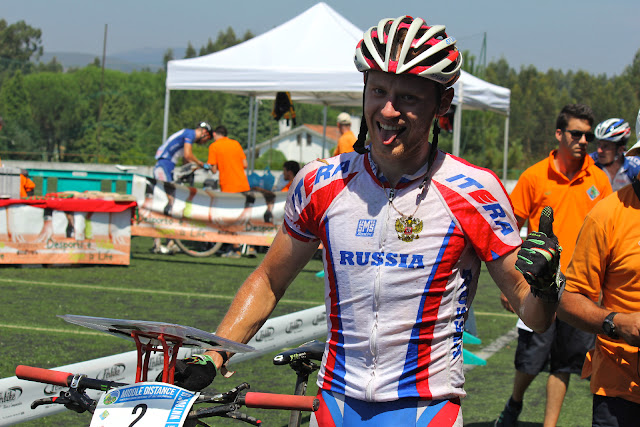 Second final of the World MTB orienteering Championships WMTBOC 2016 and second gold medal for Anton Foliforov in another nearly perfect race. Immediately after finishing his race, the Russian was the perfect image of satisfaction and recovered the emotions of another golden journey.


“It was a very fast race and I didn't made any big mistakes”, started by stating Anton, adding: “I tried to concentrate on the technical aspects, meet my pace and keep it throughout the race”. Race which had, in the final part, a nuance that could have been fatal to the athlete's dreams, but eventually left just a few spots in his body: “I had a crash, a really bad one, but luckily my bike didn't suffer significant damage which allowed me to retake the race and finish without any major problems.”

When passing in the spectators control, Anton Foliforov had just assumed the race's leadership and the golden dream was close. The applause and encouragement of the public were certainly an important lenitive, in a time when fatigue took hold of the athlete and the heat pressed intensely. Hence it's this part of the race that Anton recalls more deeply: “The last up-hill before the finish was really hard and I saw Kevin Haselsberger ahead running with the bike. I tried to pedal but I couldn't stand the effort and realized that I would have to do the same. It was a good decision and I am very pleased with the final result and with my second gold medal here in Portugal.”

The physical and technical qualities of Anton have a parallel in his mental strength and resilience, which lead him to win world titles one after another - this was his sixth title in the last three years (!). Anton shares his little secret: “A good friend of mine told me once: If you go up to the podium, you are the Champion; otherwise, you're nobody. Then I face each new race, each new challenge, with a single goal: to win!”

In the last individual final of the WMTBOC 2016 - a hard and demanding Long Distance which will take place tomorrow, in Águeda - it's sure that Anton Foliforov will present himself at the start with this great goal of victory. If this happens, the Russian will add another historic fact to his brilliant career: being the only athlete to win the three individual gold medals in a single edition of the World Championships so far. But now, the athlete's concerns are in conveniently recovering from this tough Middle Distance final: “I am very tired and I can't predict what will happen on Friday. I hope the rest day in the Championships may be enough for a good recovery but, any way, I'll be in the fight for the medals in the Long Distance race.”

Posted by Joaquim Margarido at 11:23 am