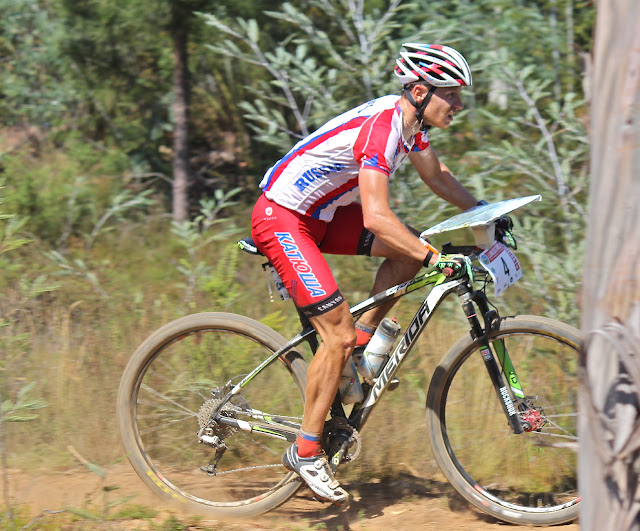 The ultimate goal of any athlete is to win a world title. But to win three gold medals, corresponding to the set of all individual competitions, in a single edition of the World Championships, is beyond the dream. It's something incredible, only available to athletes from another galaxy. In a hot afternoon, Anton Foliforov proved that such achievement is possible, collecting, in three consecutive races, the gold medals of Sprint, Middle Distance and Long Distance. And he made history, becoming the first athlete ever to achieve such results in fourteen editions of the World MTB Orienteering Championships.

After a hard Long Distance, Foliforov ended his race exhausted. Or, as he said, “completely empty”. Physically and mentally. The words were almost spelled out but he didn't fail to answer a couple of questions: “I still can't think very clearly about the meaning of this victory and, after this long Long Distance, I'm very happy that I am alive (laughs).”

Considering the race as “very tough in a very hot afternoon”, Anton recognizes that “my brain didn't work as it should and I made some mistakes, including a big one of about two minutes to the 7th control. After that, I had to get focused and tried not to rush myself, to avoid making more mistakes. From that moment on, I ran more slowly but I ran well”. The athlete recalls the final part of his race: “In the last climb, the muscles began to sag and I had no strength to pedal. I tried to manage the effort and save the last reserves of energy for the final moments. Now, that the race is over, I'm really pleased with my victory.”

Portugal is a kind of talisman for Anton Foliforov. It was here that he achieved his first World title, in 2010, and where he returned to collect three individual titles six years later, making a total of nine gold medals in his career, so far. Hence his last words are addressed to Portugal and, in particular, to the Portuguese Davide Machado for the bronze medal achieved: “Davide is a very strong athlete and this race was for athletes like him. It's amazing that he has achieved this result and this is also a prize for Portugal, who hosts the organization of the World Championships.”