Emily Benham: "I am so unbelivably happy!" 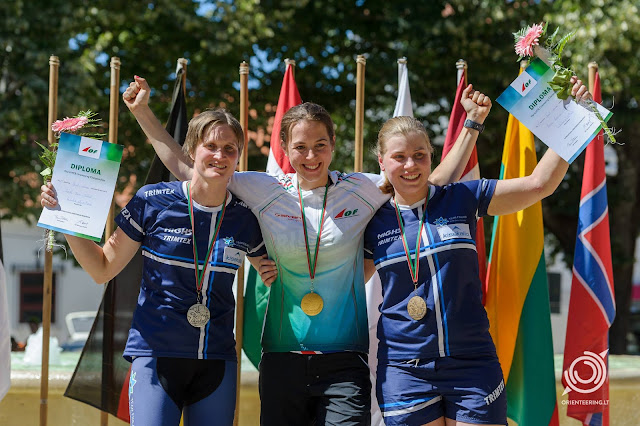 IOF Athlete of the Month of September 2014, Emily Benham said then: “The last four years have seen dramatic changes to the top 10 ranked athletes, and quite possibly we have seen a lot more new names being World Champions than we did before 2010”. One of those new names in the World MTB Orienteering Championships' Book of Honor it's, since yesterday, precisely Emily Benham. Big figure of this challenging discipline in the last years, Emily Benham had already won everything there was to win, but a World title. It happened yesterday, in the Sprint race that kicked off the WMTBOC 2016, in Cantanhede, Portugal.

“I am so unbelievably happy, I just can't believe it”, were her first words, expressing the deepest feelings at the moment. The natural follow up question would be: “Did you expect to win?” And the answer: “No, not at all. I've been focusing on other areas of my cycling, trying to get faster and be more technically skilled and this year I've only done a few MTBO races and one MTBO training so I came here with no expectations, just ride for fun and see what I could achieve. So it was really amazing to win today.”

Asked about the secret of her victory, Emily just said: “I don't know!”. But she knows, as we can see: “I just had a really full control, every junction, I just knew exactly where I was going and I just didn't make any mistakes. That was absolutely the key to my success.” Analyzing the race, Emily said that “physically it was fine and technically with the orienteering as well, it was also fine today”. Along the course, she kept on thinking “I need to ride faster!”, but she knew that she was pushing hard and that she was focused: “Then I saw Martina in the distance, so I knew it was going well”.

Tomorrow, there will be another final and a second gold medal isn't out of Emily's thoughts: “I don't know, it's hard to say that. I'm in really great shape at the moment and I think mentally I'm in a very good place so, we'll just have to see what Wednesday brings.”

Posted by Joaquim Margarido at 4:40 pm