Olga Shipilova Vinogradova: "Sometimes you need to take a break to get motivation" 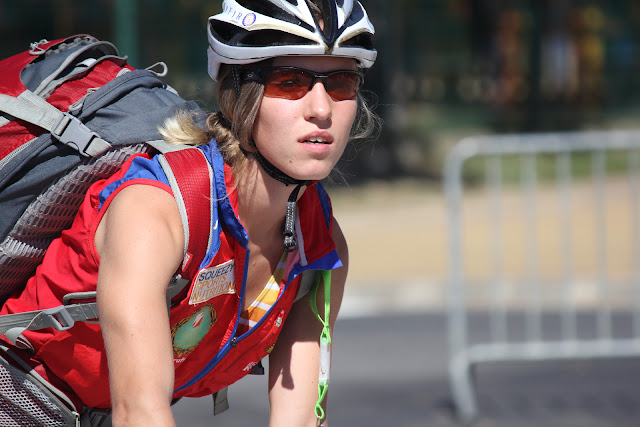 MTBO's well-known name, Olga Shipilova Vinogradova is back. In this interview to the Portuguese Orienteering Blog, the athlete speaks of the two-year break in the competition and confesses motivated for the big clash in a few days.


You came from WMTBOC 2014, in Poland, with the gold medal of Long Distance in your luggage. Then, you suddenly “disappeared”. After two long years, here you are and we are really pleased to welcome you again. May I ask you why such a big pause?

Olga Shipilova Vinogradova (O. S. V.) - After such a success I decided to take a break. It was a long 7 years of MTB sport before 2014 and I’m really happy that time ended with the most wanted title in the World for me. During these two years of rest I got married and gave birth to a daughter who is now 9 months old.

Did you miss MTB orienteering during all that time?

O. S. V. - No, I really didn’t miss orienteering most of the time because I was resting from it which I really wanted. But before this season, when I started to train, I realized that I missed orienteering very much and I wanted to race again. Sometimes you need to take a break to get motivation.

Looking back, what are the differences between Olga Vinogradova in 2014 and today’s Olga Shipilova Vinogradova? (At least, we can notice a difference in the name :)

O. S. V. – The way I look at life and at a lot of things that seemed very important for me before is now easier and simpler.

You’ve been to Denmark and Latvia preparing the major international events. How do you rate your season so far? How do you feel about your shape right now?

O. S. V. - At the very beginning of the season, in January, when I started training seriously, I wasn’t quite sure whether I could reach good shape. Then, In May, the first serious competitions started and it was during the Russian Championships that would be decided who would be in the Russian MTBO team for WOC. During my trainings I thought a lot about my chances to be selected for the team as I was really slow at that moment. But when the time came I was able to race very successfully and even won the Long Distance. In 2014, for example, I was second in all races of the Russian Championships. In Denmark and Latvia I was going step by step and not forcing it too much. I’m happy with the results and now training a lot with the maps. Those competitions showed me that my shape is fine, but I’ve got a lot of problems with my orienteering.

After such a long break, what particular feelings are you getting on this return to the competition? Has it been hard physically?

O. S. V. – Yes, it has been really hard, especially on the first races of Russian Championships. I can’t really remember a race being as hard for me as these were. But I was very happy to be racing again. I felt delighted every moment of the distance, a great joy for doing what I really like.

You’ll return to Portugal in a couple of days for the World Championships. Is WMTBOC the biggest goal of the season? Do you expect to leave Portugal with another gold medal on your chest, as in 2013, during the World Cup's last round?

O. S. V. - Yes, the World Championships in Portugal are my main goal for this season, that’s what I have been preparing for since last December. I’m trying not to think about the results but, of course, I hope to show some good ones.

What are your expectations for the whole season? Is quickly recovering the IOF World Ranking’s top places a priority?

O. S. V. - The IOF World Ranking doesn’t really mean much to me. My first priority is doing my best at the WMTBOC. And after it I will switch to riding and racing enduro till the end of the season in November. I tried this discipline in 2014 with my husband and I really enjoyed riding in big mountains. I even won a couple of races in Russia that year.

O. S. V. - I always dreamed, but now I live according to an idea book, titled «Power of Now». I’m realizing my biggest dream, which is travelling in a caravan through Europe with my family, racing and training in beautiful places.