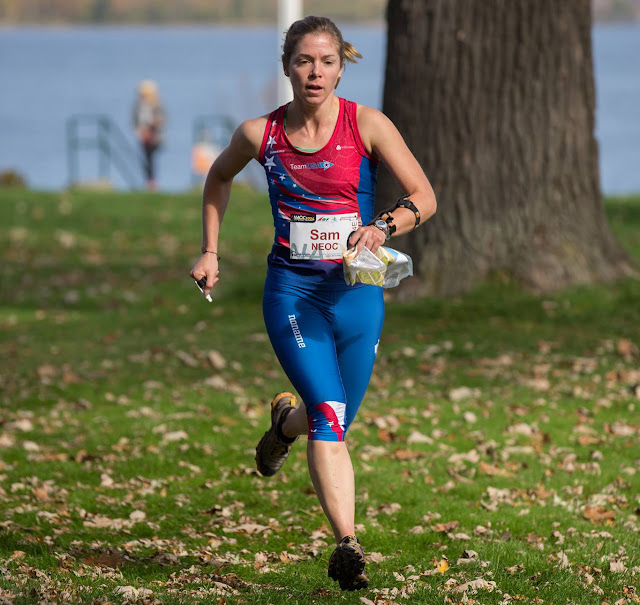 On the way to her 11th WOC in a row, Samantha Saeger comes for the first time to the Portuguese Orienteering Blog's tribune. Along a pleasant conversation, she tells a bit about herself and her passion for the sport, the expectations for the next WOC and the Orienteering in the United States of America.

I would start by asking you to present yourself?

Samantha Saeger (S. S.) - I’m an American orienteer who has been living in Uppsala, Sweden for the past 5 years. I come from Boston, MA, where I run for New England Orienteering Club and in Uppsala I run for OK Linné. I moved here with my husband for a change of scenery, but also to be able to do lots more orienteering. I’m a teacher here in Uppsala, and I teach math to year 4 and 5 students at an international school.

How did you meet Orienteering and what do you see so special on it?

S. S. - I started orienteering at a young age with my family. My parents started orienteering before I was born and my younger sister and I were dragged to orienteering races for most of our childhood. At some point I started going out voluntarily and made life-long friends in the sport. I think it’s special because of the community, the travel and the experience of having to run full speed through the woods while trying to think clearly at the same time. It’s never easy and there is always a new challenge!

If I am right, you didn't miss any of the last ten WOC and your longevity in the World Orienteering's greatest event worth to be mentioned. Do you a feel “an old girl”?

S. S. - It’s true - I guess I really love racing at WOC! WOC provides a goal for me every year and gets me out the door on dark, cold and rainy Uppsala nights. Striving to be better than years before and to reach new goals - even if it doesn’t always work out - and representing the US is something I love. I most certainly feel old some days! But as long as I continue to improve in small ways, train hard, race well and enjoy it, I’ll keep going!

Would you like to remember some of the best WOC moments of your career so far? And what about the worst?

S. S. - There are lots of ups and downs in orienteering, so there are many memories! 2009 in Hungary was the first year I made the final in both the sprint and the long (back when there were finals for forest races). In the US our main goal is often to race well enough in the qualifiers to make it to the finals, so for me this was quite special. One of my worst recent memories is from the relay in Italy in 2014. I ran first leg for my team and was completely lost on the third control. I was the last runner to come through the spectator loop on the first leg. It was so hard to keep going knowing that I was so far behind and I felt like I had completely let my teammates down. I suppose this story has a bit of a silver lining, as I ran well on the second half of the course and without knowing it passed some other teams. My teammates were great and ran strong during their legs to bring us back into the mix.

You'll be in Strömstad, next August. What kind of event are you expecting?

S. S. - I’m expecting it to be a very well run event from an organisational point of view and tough terrain in the forest! I will run the sprint relay, middle, long and relay, so I have quite a full week! Although I live in Sweden, Uppland doesn’t quite have the hills that the west coast has. I expect hilly terrain filled with cliffs that I know well enough to avoid!

What are your main goals?

S. S. - Race clean and race hard! I try not to do placement goals, as it’s easy to be disappointed even I have a good race. If I can put it all together - push hard through the whole race, good route choices and navigate cleanly when I’ll be happy. Of course this is every orienteer’s wish!

When we talk about orienteering in USA, what are we talking about?

S. S. - The orienteering community in the US is small but very dedicated. We have very high quality events on beautiful maps. Because the country is so large, I actually can’t really speak to how orienteering racing is in most of the country. I grew up in the northeast and did most of my orienteering there. I would say that the northeast is the most active region for orienteering, but I may be biased :) We have some good maps in the area, although it gets quite thick in the summer and cold and snowy in the winter, so the races are in the fall and spring. There’s also a group group of orienteers in the north east, especially in the Boston area where I lived, and although most people were too far away to meet up during the week, there are always local events or trainings on the weekends where people can get together. The national events themselves are very well run, have updated maps, good courses, but way fewer competitors than any race here in Sweden! 200 people would be a good turnout back home, and it feels like there is no event that small in Uppsala.

What do we need in order to see orienteering in USA at the same level of Europe?

S. S. - There are always a number of ideas being tossed around. Because everyone is so spread out, a training centre would be a great way to bring everyone together. I think one of the hardest parts as an orienteering athlete in the US is that you have to do almost all of your training by yourself away from your teammates. Even if there is a national training camp, it could be on the other coast which is three timezones and a 5+ hour flight.

S. S. - At this point, to continue to grow as an athlete and enjoy the journey!