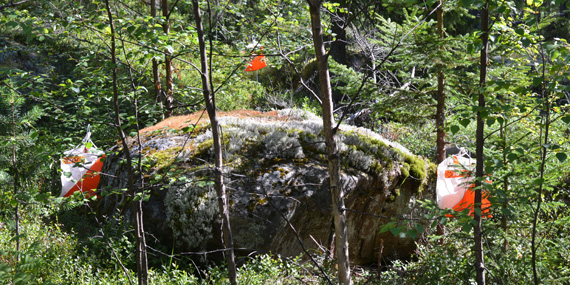 O-Ringen, the most attended Orienteering event in the World, isn't just FootO. Held over five PreO stages, the TrailO competition had in William Rex the big winner, followed by Marit Wiksell and Robert Jakobsson.


Taking place as a separate 5-day competition in the area around the O-Ringen, the O-Ringen TrailO was attended by 101 competitors spared by the Pre-Elite, Pre-A, Pre-B and Pre-C classes. Rolf Karlsson was the Event Director, Torbjörn Lentz planned the three first stages and Erik Lundkvist was the course setter of the 4th and 5th stages.

Marit Wiksell (Rehns BK) and Martin Fredholm (OK Linné) had the perfect start, correctly answering all tasks of the first stage and finishing their courses with 20 points. The second stage offered a set of 25 tasks, with Robert Jakobsson (Tidaholm SOK Sisu) and Tomas Jansson (Björklinge SOK), being, this time, the most well-accurated, achieving clean courses. With least two correct answers than the winners, Marit Wiksell and Martin Fredholm still retained the lead in the end of the second day, but now together with William Rex (OK Landehof), Jens Andersson (OK Roslagen), Charles Bromley Gardner (BOAC) and the aforementioned Robert Jakobsson, all with 43 points.

With 12 controls out of 23 canceled, the third stage didn’t bring significant changes on the top of the standings. Of the six leaders, just Martin Fredholm missed a task in a stage that had in Lennart Wahlgren (Rehns BK) the big winner. The Japanese Koji Chino (Wanderers) was the winnerof the 4th stage with 19 out of 20 points, as many as those achieved by William Rex and Marit Wiksell who led the overall strandings with 73 points at the entrance to the decisive stag. The 5th stage allowed to find the O-Ringen’s winner, since William Rex didn’t fail any of the 25 tasks, while Marit Wiksell was unlucky in the 13th control, finishing second. The 5th stage’s winner was the Norwegian Lars Jakob Waaler.

One last note for the winners in the other categories. Björn Karlsson (Rehns BK) won in the Pre-A class with 77 points, the same as Rudi Olvenmyr (OK Tyr), but being faster in the timed controls. In the Pre-B class, the victory went to Karin Hansson (OK Rodhen), while Linus Aftevik (OK Gläntan) won the Pre-C class.