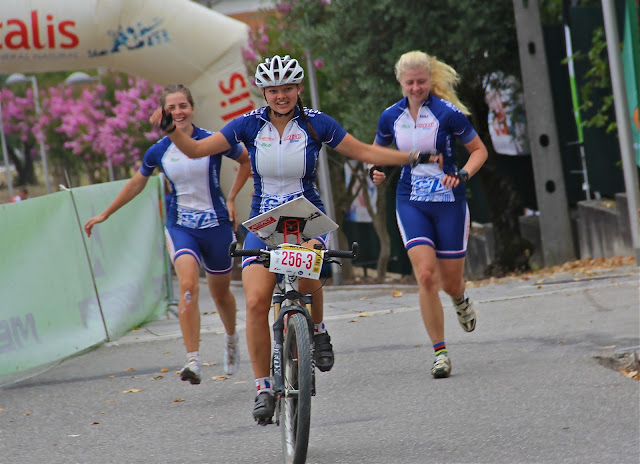 Relay in Portugal was the most emotional race I’ve ever had. Everyone was talking about my fourth gold medal and thought it was impossible. My girls were a little nervous so I tried to spread a good mood. I love relay - it’s all team’s fight. You share your feelings and it doesn’t matter if you fail or if you win.

I wanted to race so much. With three gold medals, I was absolutely calm. I didn’t feel any pain after the previous races – still felt strong. I started 33 seconds behind the first Russia relay. Just few meters after the start I made a huge mistake as most of athletes did. I thought that my fight for the first place was gone. “Never mind, keep calm and enjoy the race, that’s all you have to”, I told to myself. Then my race was fast and without mistakes. On spectators section, the Czech people were loudly shouting. That was the first moment when I realized that we could be the first at the arrival. It was true! I was on the last control and everyone was clapping hands. “Is it real? Am I the first? Am I? Am I?” I couldn’t understand it. I had to ask our coach who shouted: “You are the first, go!”. Then I saw the finish line and my girls who enthusiastically waited. I used all my power. We made it, they made it, I made it! I happily hugged girls and enjoyed the moment. I felt excited and relaxed. For me this victory means a lot!

[As for the other races] Before the Sprint distance I wasn’t nervous, just the opposite, I was mentally calm. It was hard to move fast in the heat. But Sprint is only about 18 minutes so I didn’t wait and I rode as hard as I could right from the start. I made one small mistake when the terrain changed from forest to urban. But still I was enough fast to achieve my first gold medal. I was delighted and I was looking for the next races. In the morning of the Middle distance, I saw thick fog over the window which mean colder weather. It was great for me. I knew that was my chance to sell my power. Again I made one mistake to the last control and I had to run with my bike because there was steep hill. After this mistake I tried to go as faster as possible and my legs nearly died. Few minutes later I realized that my mistake wasn’t a mistake and I happily won again. What can I say about Long Distance? It was hard work all the time. There was so many crossroads... I lost about 1,5 minutes but no bigger mistakes. Actually I think I wasn’t as fast as the previous races but no mistakes showed me the next view from the podium as a champion. Third gold medal? Wow, it's more than I’ve dreamed.

An amazing week in Portugal is over and I keep so many beautiful memories. Thank you “orange machine”.