WUOC 2016: Relay gold for Sweden in the end of the Championships 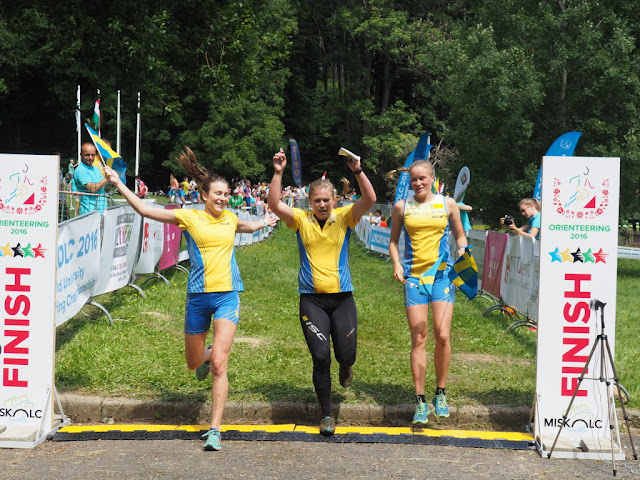 The Relay put an end in the 20th World University Orienteering Championships WUOC 2016. As in yesterday’s Middle Distance, Sweden occupied the highest place of the podium in both classes, Men and Women, becoming the big winner of the competition.


In another fantastic day by Magyar's land, the Orienteering tribe returned to Jávorkút for the final stage of the World University Orienteering Championships' competitive program. The Relay was attended by 48 male teams and 35 female, becoming a great party and ending in the best way a week of high level competitions, in a fantastic atmosphere of conviviality and with a faultless organization.

As in most cases, the first leg of the Men’s competition didn’t prove to be particularly decisive, with the first fifteen teams finishing their courses within a range of one single minute. The Spanish Antonio Martínez was the fastest, followed by the Czech Jan Petržela and the Finnish Otto Simosas, with more 8 and 14 seconds than Martínez, respectively. Oskar Sjöberg started to design the victory of the Swedish team by taking some advantage on his most direct opponents. Sjöberg’s difference for the Czech Republic's B team was of six second, but the Swiss, the third ranked in the end of the second leg, was at nearly two minutes from the lead. In the last leg the Czech Tomáš Kubelka couldn’t stand the pace an Johan Runesson was a comfortable winner, giving to Sweden its fifth gold medal in this World Championships. The final time of the Swedish team was of 1:39:26, with Switzerland finishing in the second place 2:48 after Sweden and Finland being third with a disadvantage of 3:19 to the lead. The German Moritz Doellgast performed greatly, winning six positions in the decisive leg and overtaking Estonia, Austria and France over the finish line. Hungary couldn't do better than the 18th place achieved by its B team, after the first team's mispunch.

With three courses nearly perfect, Sweden was the winner of the Women Relay with the time of 1:56:44 overall. The two Swedish teams finished the first leg in the top positions. Helena Karlsson and the Czech Denisa Kosová did a particular duel for the lead in the second leg, ending separated by eight seconds, with the advantage belonging to Karlsson. In the third leg, Lilian Forsgren did another great race, increasing the lead on the Czechs to 1:05 and winning his second gold medal in a row, after being the fastest in yesterday's Middle Distance. The fight for the bronze medal was also very intense, with the Norwegian Ingjerd Myhre to be the strongest in the final part and finishing with advantages of 8 and 11 seconds over the Russia and the Great Britain, fourth and fifth ranked, respectively. With Virág Weiler, Filomena Kovács and Regina Bertóti, Hungary finished in the 9th place with more 10:26 than the winners.

In all five races hold in as many days, Sweden was the great name of these World Championships, reaching five gold and two bronze medals in a total of 27 medals distributed. With two gold medals, Great Britain comes second in this particular standings, while the Czech Republic and Finland achieved one gold medal each. The Czechs also raised in the podium another four times, achieving three silver medals and one bronze, while the Finns got three bronze medals more. The medalist registers also the presence of Switzerland, with three silver medals and one bronze, Norway, with two silver medals and two bronze and Russia, with one silver medal.

Posted by Joaquim Margarido at 5:54 pm