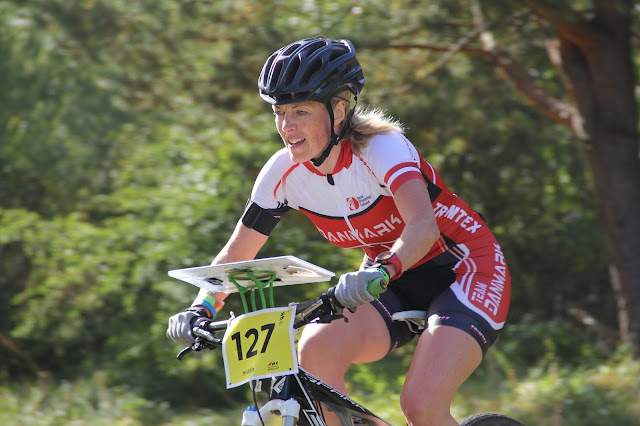 Nina Hoffmann is one of the strongest links of the MTB orienteering's “family”. Relaxed and uncomplicated, her attitude is welcomed by all and her example is an asset in a world that's not just about winning medals. Invited by the Portuguese Orienteering Blog to share some opinions, she gives to know herself in three important aspects: The athlete, the woman and the mother!


The first question is always the easiest. Would you like, in brief, to present yourself?

Nina Hoffmann (N. H.) - My name is Nina Hoffmann. I'm born and raced in Denmark, did live on Guernsey for three years in my early twenties, but I'm back living in Denmark again. I'm the mother of three amazing kids aged 6, 9 and 11. I work full time as a health consultant for the Municipality and my specialty is helping out people with diabetes 2. I love to travel, enjoy the nature, good healthy food, meet people and spend time with those dear to me. I see myself as a positive person with a positive view on life, being grateful for all the good I have.

How did you meet MTB Orienteering?

N. H. - I was born in to the world of orienteering. I did Foot-O on and off my whole life, I've been on the national team in Biathlon orienteering and I started MTBO back in late 2008, because I had started riding some MTB as training and the sport MTBO was starting to grow in Denmark (and Denmark was prepared to host the European Championships in 2009). I thought it could be funny to try it out and I've been hooked on it ever since.

What do you see in MTB Orienteering that makes it so special?

N. H. - For me, Orienteering is special and I love all aspects of it. What makes the MTBO special to me, in particular, is the “MTBO Family”.

Your first presence in the World MTB Orienteering Championships was in 2009, in Israel. Do you still remember the heat? What memories do you keep from that week in Ben Shemen?

N. H. - I remember Israel quite well, first of all for my difficulties of packing and unpacking a bike on my own (laughs), But also the very different terrain and getting stopped at customs twice when leaving the country. I was the only member of the team that had won the bronze medal at the Relay at the EMTBOC in Denmark, so my expectations were to get some experience. I also remember loving being off to races as a team and I've loved it ever since. We also had time to relax and see some of the sights, which I value when attending the championships/races.

You missed Portugal in 2010 but, after that, it was possible to see you in all WMTBOC's editions, reaching some good results, namely the silver in the Relay (2013) and the bronze in the Middle Distance (2012). Would you like to mention the two or three best memories of your career so far? And the worst?

N. H. - Winning the bronze medal on the Middle Distance in 2012 was very surprising and of course a really nice memory. But, for me, the best memories are the results we've made as a team in the Relays - my first medal at the EMTBOC in Denmark in 2009 and getting the silver in 2013 with Ann-Dorthe Lisbygd and Camilla Soegaard. Also riding the first leg in Portugal and getting the bronze at the EMTBOC 2015 is a very special memory to me, first of all because I wasn't sure I could ride because of my crash at the start of the week and, then, to come in first on the first leg was surprising. To be on a team with Camilla Soegaard and Caecilie Christoffersen, but also to be a part of and having the opportunity to follow their progression in MTBO are an absolute joy and honour for me. The worst memory must be the Relay in Italy, actually not so much because of the disqualification (that can happen to anyone), but because some of the people on the team didn't handle it in a respectful way, if you ask me.

How do you rate the current season?

N. H. - Loved being back in Portugal and racing knowing that “the orange machine” had things under control. I've never been to Lithuania before, but I was pleasantly surprised and I'm looking forward to going there next year. On the other hand, I was very disappointed with the organisations of the races in France for several reasons, but hopefully I'll be pleasantly surprised next year.

Did you achieve the results that you've been expected?

N. H. - My expectations this year were mainly on the Relay and I'm somewhat disappointed, as we were going for a medal. But there were many strong teams and the luck didn't shine on our way. So we just have to come back stronger next year. I'm not too much disappointed with [my positions in] the [World Cup overall and IOF World] ranking, but disappointed that I didn't have more “clean” races. Unfortunately I haven't been able to do as much orienteering training as I wanted this season, so I just have to focus for the next season. But, with that said, it's nice to see that I can still do a top 10 after a clean race in the Sprint at the WMTBOC this year.

Between 2007 and 2011, the national anthem of Denmark was played in the World Championships for eight times. The Rikke Kornvig's gold in the Long Distance and the Men Relay's victory, in Vicenza, Italy, were the last titles achieved by the Danes. How do you see the MTB Orienteering's present moment in your country?

N. H. - The Danish team is quite young, but with loads of potential. I'm sure the national Anthem will play again.

How do you see the present moment of MTB Orienteering? If you had the power, would you change something?

N. H. - MTBO is still a rather small sport. If we want more participants, we have to make it more like a Family sport. If me and my children are attending a Foot-O event in Denmark, there's lots of activities for the kids - a marked course, child care, etc., but you won't find that at MTBO in Denmark. Why do not put up some obstacles for the kids to practice getting better on the bike, a marked route for them to ride and some child care, so the parents can go riding too? In Denmark we started doing weekend training camps for the youth (like there's been in Foot-O for years). I like that “The Camp” we have in Denmark and Sweden to start the MTBO season has started to have kids courses, but I think we can do even more. And this camp is for people already doing MTBO in some way. Why not to have a summer camp for families in general or those doing Foot-O, a camp for them to try out MTBO, technical training on the bike, social events, etc.?

What means, from a personal point a view, to be MTB Orienteer, Woman and Mother?

How difficult is to conciliate the family life with MTB Orienteering?

N. H. - It's only as difficult as you make it. Of course you have to compromise, but I think one would have to, any way. I sometimes wish I could work less and train more, but that's not an option at the moment, so I just have to train smarter. I also wish I had more time with the kids, but then I just make sure to have quality time with them, be present in the moment. I think the key word is focus, focus on what you're doing. When home I'm most of all mother and when I'm out racing I'm most of all a woman doing MTBO.

Do you have plans for the next season? Are you already feeling some good vibes about returning to France and Lithuania, this time for the European and the World Championships?

N. H. - I'm planning on being a part of the national team next year, but also looking into the possibilities of doing some of the individual races in Masters. I'm, as I said before, not impressed with the French organisation this year and I thoroughly hope that they will read the feedback and improve on all the issues that were needed to reach the expected standards for a European Championships. I'm hoping to take advantage of my connection to Finland and get some O-technical trainings there as I think that would be relevant for Lithuania and would give me some good competition training, as Finland has a lot of very strong female athletes.

Have you some goals already designed for the next season?

N. H. - Those will be set when the National team meet up in november. Personally, I plan on more training with the map and going for more clean races.

N. H. - To grow old and spend time doing what I love and with those who give me joy, make me laugh, believe in me and love me for who I am.