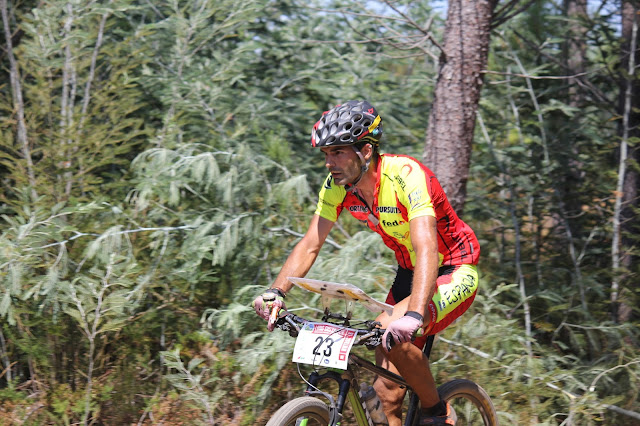 Born in Salamanca 31 years ago, it's in La Coruña, in the northwestern Spain, that Angel Garcia Garcia currently lives. To the Tower of Hercules he goes to seek his enormous strength and the brilliance of the results achieved merges in the frontages of the City of Crystal.

Lover of both sports and music, Angel practiced Canoeing for eight years, but it was through Adventure Racing that he first made contact with Orienteering. MTB Orienteering has emerged as an extension of his growing interest for the sport; being able to combine mountain-biking with Orienteering challenges and the ceaseless quest for the best option has resulted in the perfect “two-in-one” solution for him, in a passionate story with just two years.

Angel's first international experience took place at Bialystok, Poland, during the World MTBO Championships 2014. The athlete had just finished a mountain marathon and his physical conditions were everything but perfect. Unpreparedness and inexperience in events of such high demand resulted in weak performances, but Angel was able to make the most of this unique opportunity and learn from his failure. In 2015, in Liberec, Czech Republic, we cannot say that the results significantly improved, so it was with great surprise that we saw him reach the 5th place in the Sprint of the World MTB Orienteering Championships, held in Portugal this summer.

- Were you expecting the 5th position?

“I didn't expect it at all! During the race, I took the risky but wise decisions I had to, and it went well. When I found out, at the end, that I had achieved the 5th place, my joy couldn't have been greater, because this is the Spanish Orienteering Federation's best result ever in the World Championships.”

MTB orienteering is a discipline that is both exciting and demanding, in which athlete and bike merge perfectly in the pursuit of excellence. Emphasizing the particularities of the MTB Orienteering, Angel remarks that “the most difficult part is to identify the thin line between pushing at full speed and slowing down, so as always to be able to navigate on the limits”.

Speaking of this discipline in his country, Angel highlights the good technical work in the Spanish team and also “the brilliant athletes who will present nice results in a short time.” With these riders, this coach and this Federation, the MTB Orienteering future in Spain seems promising and Angel sums it up in two words: “Growing” and “improving”!

Awaited with impatience, the 2017 season is already Angel's main focus. He knows that all the races are special so, in France or in Austria, in the Lithuanian World Championships or in the Spanish League, we will see him making the most of each experience and, above all, enjoying maps, terrains and the company of the best in the world. “I'm very motivated and looking forward to the start of the season, in which I promise to do my best and fight for top positions”, he concludes.