Athlete of the Year 2016: Tove Alexandersson 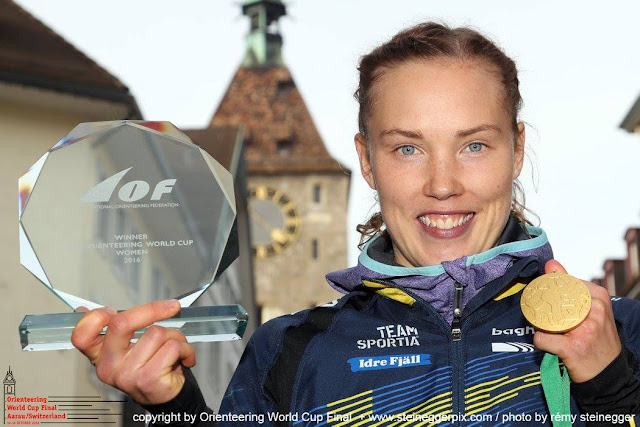 2016 was the peak of Tove Alexandersson’s orienteering career so far, which before this season was packed with merits, yet no gold medal at a World or European Championships (WOC, EOC). She crushed that history, becoming both World Champion and European Champion in Long and Middle distance. In addition, she spent the winter winning the World Cup in SkiO overall and two gold medals in the European SkiO Championships.


100 metres before the finish line a silent smile appears on Tove Alexandersson’s face. Listening to the speaker’s words and the crowd of Swedish spectators cheering her, she realises she is on her way to fulfil the goal, the dream, for 2016. Becoming World Champion in both Middle and Long.

The moment she realised she had won the World Championship in the Long distance just two days after the victory in the Middle, is the moment that stands out the most for Tove Alexandersson, looking back at 2016. Winning a World Championship is obviously something special, even though
it might be hard to pick out one moment with two gold medals at the European SkiO Championships, two golds in EOC, the two victories at WOC and overall World Cup victories in both FootO and SkiO all in one season.

But not for Tove. She had many goals during the season, but they all led up to the World Championships on Swedish home ground in Str.mstad-Tanum. She put asphalt running to one side, and moved to Halden for six months to get access to as similar terrain as possible. All with one
thing in mind:

– I really wanted to win, she says very earnestly, in a voice that tells everything about the many times she previously had started at a WOC race as favourite, but at best made it into second.


The season starts on ski

As one of very few athletes, 24-year-old Tove Alexandersson competes on top level in both FootO and SkiO. In SkiO, she is five times World Champion and four times European Champion. The prestigious overall World Cup, which only takes place every second year, was missing though. Tove’s winning instinct was not satisfied with that, and now that the SkiO and FootO did not overlap as in previous years, 2016 would be the year for an overall SkiO world cup victory:

– The two previous times I have finished second overall in the world cup, close behind the winner. So I was craving for the win this time, Tove says.

The plan was simple. With three World Cup rounds, the last one also being the European SkiO Championships, it was all about doing stable races in all nine competitions. And that she did, finishing outside the top three only once and winning five times. However, it was no walk over:

– It was a very tough competition against Mariya Kechkina from Russia. She achieved top results at all events and so I had to perform well at every competition, Tove says.

The battle turned out in favour of Tove, who achieved her goal for the SkiO season in the form of the overall World Cup victory, 20 points ahead of Mariya Kechkina. In addition, the European SkiO Championships led to medals in all five distances: gold in Sprint and Relay, silver in Middle, and bronze in Long and Sprint relay.

– Satisfying, as Tove describes the results.

Just after the European SkiO Championships were over, Tove’s focus went immediately from skiing to running. Two races were in her sights and nothing less than victory would count. The WOC Middle and the Long distance on home ground in Sweden:

– I dreamed about gold on Long and Middle before the season began. This year I really had the belief it would come true. I knew I had the capacity, Tove says.

To reach her big goal she took some drastic decisions. She decided to skip the Sprint races at WOC, and six months before the championships she moved to Halden in Norway to train in as relevant forest terrain as possible.

Two months after her overall victory in the SkiO World Cup, the FootO one started in Poland. Three weeks later this was followed by EOC in the Czech Republic. At the EOC Long distance, she got a feeling for what the orienteering season could lead to:

– Standing at the starting line at EOC Long distance, I felt stronger than I had for many years. I was fresh and injury free. I had a fantastic feeling and it was amazing to win, Tove says about her first gold medal at EOC.

Only three days later, her good shape continued, crushing the opponents at the EOC Middle distance with a two-minute win. In the months between EOC and WOC, Tove continued her good training flow and used O-Ringen as a last test before WOC:

– After EOC, I could train just as I wanted to. I ran O-Ringen to adjust the last technical details. My orienteering technique proved to be brilliant, which boosted my confidence before WOC. Looking at the results, it also went pretty well, Tove says with a laugh about her superior victory in the Swedish five-day event.

Only victory counts when Tove Alexandersson starts a race and to achieve that, preparation is essential to her. Therefore, watching the WOC Sprint races from the TV did not make her hungry to run them. She knew she was not prepared to run those races.

On the other hand, she was as prepared as anyone could be for the WOC Middle distance:

– I had planned to avoid pushing too hard at the beginning because I was in such good shape. But I did exactly what I had planned not to do, and went off at really high speed. I managed to keep up the high speed without any big mistakes, but only because I had got so used to the terrain in my preparations, she says.

Even though Tove did not stick exactly to her plan, she could happily make the classic Scandinavian roll at the finish line after “the toughest Middle distance I have ever done”. And at last; her fourth medal at a WOC Middle was the kind Tove likes the most. Gold.

Two days later, the challenge was different but the goal the same. There was even a little more at stake:

– Before WOC, I considered Middle and Long to be of the same value, but during the championships I became aware that the Long distance meant the most to me.

The Long distance started with a short leg to the first control followed by a 3-kilometre leg:

– I lost some time going straight on the long leg. I saw the option to go around to the right but considered it way too far. The next part of the course went without error. At the spectator control I heard the speaker saying I was three seconds behind. I did not hear who I was behind, just that victory was within reach. It was a very special situation knowing I was so close to fulfilling my dream!

And then we are back to the highlight of the year:

– I am so proud that I could keep my concentration after the spectator control. It was a fantastic moment to run over the finish line knowing I was World Champion in both Middle and Long, she says with a big smile.


Training by herself together with others

It requires a lot of mental strength to continue from the spectator control with the knowledge that only three seconds separate you from victory. Tove proved she possesses that strength, which was founded in her junior years:

– When I was in the Swedish junior national team, the coach Anneli Östberg meant a lot for my progress. She gave me the basis of how to handle stress and nervousness during events, which has helped me perform at big competitions.

As for the physical and technical part, Tove takes care of her training all by herself:

– I have never had a physical or technical trainer. Since I was little, I have always been interested in and reflected on training. I am the one that knows me and my body the best.

It does not mean she does all her training alone. For instance, she mentions her training group for the past five years in Falun as important to her. But no-one dictates when and what to train. She is aware that she can improve with the help of others and is looking forward to next autumn, when the French legend Thierry Gueorgiou will become the o-technical coach for the Swedish national team.

A runner in the same category as Gueorgiou who has inspired Tove is the Swiss icon Simone Niggli-Luder:

– She has been the biggest inspiration to me. She was complete as an orienteer. I am happy that I had some years competing against her and saw her in action.

In the last two years, Tove has had convincing overall victories in the FootO world cup. Even though the long 2016 season had begun to take its toll, Tove managed to secure her third win in a row in the last world cup round in Switzerland.

Her success is not only being noticed within the orienteering community. The media attention at the World Championships on home ground and nominations for several sport prizes in Sweden have made her name one which most Swedes have heard. The limelight does not blind her:

– Of course it is an acknowledgement of my achievements to get these nominations, but the publicity for the sport of orienteering that comes from it means just as much to me. I really do not need that much attention, Tove says with a laugh.

But she cannot run away from the attention as the big star of Swedish orienteering. People have expectations of her winning every time she starts a race, but the biggest pressure comes from herself.


A winner’s instinct that cannot be satisfied

No wonder Tove describes 2016 as the best season in her career so far. Though it does have moments she would change if she could:

– At the EOC relay I went out in second position on the last leg and if I had not run to the wrong control at one point, we [the Swedish relay team] would have had victory within reach. I really fret about that, she says.

The mistake at the EOC relay touches a sore point for Tove Alexandersson, still missing victories in relays as part of the Swedish team. For her Swedish club, Stora Tuna OK, she has won the Swedish relay championships, but both the big relays Jukola and Tiomila are goals for the future.

The missing WOC relay title will not affect her preparations for next year. It is the Middle and Long distances that are in her heart. Possessing the World Champion title in both, she is considering taking up the Sprint again at WOC 2017 in Estonia.

Before thinking too much about WOC 2017, she has a SkiO season ahead during which she needs to defend two European Champion titles in Imatra, Finland, and two World Champion titles in Krasnoyarsk, Russia. As always, only one thing is on her mind. To win.

[See the original article at http://orienteering.org/wp-content/uploads/2010/12/orienteering-world-webb.pdf. Published with permission from the International Orienteering Federation]