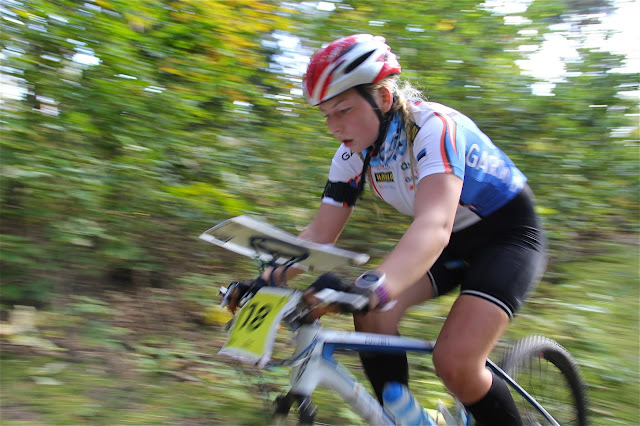 Today, the Portuguese Orienteering Blog heads to Estonia, meeting Doris Kudre, an athlete who can perfectly combine SkiO and MTBO. In a long Interview, she introduces herself and leaves her thoughts on both disciplines.


I would start by asking you to introduce yourself: Who is Doris Kudre?

Doris Kudre (D. K.) - I'm a 19 year old girl from Estonia. I was born in South-Estonia, in a small place called Värska, but I moved to Tartu this Autumn , where I'm studying Economics in Tartu University. If someone who wasn't an athlete asked me about my hobbies, I would say “sport“, but now I don't know what to say. I used to play piano and accordion, but I’m actually so busy with school and sport that I don’t have any other serious hobbies. I love traveling and new experiences and I think I've been able to have lots of them as an athlete.

What came first: Bikes or skis?

D. K. - I think every child from an athletic family is introduced to bike and skis from a very early age. It was the same with me. I believe I started to like skiing more because I practised it often and I became better at it. As a child, skiing was like a real sport, while biking was more of a mean of transport. I started to practise biking seriously in 2013, when I got myself a proper bike.

How did you meet Orienteering? Do you recall the first moment you said to yourself: “ - That's it, Orienteering is my sport!”

D. K. - My parents have done orienteering since they were in school and their passion for orienteering has carried over to their children, too. They took me and my two sisters and brother to orienteering competitions and trainings from an early age. I think there wasn’t such a moment when I decided Orienteering would be my sport for life. I've grown up with it and I can’t even imagine my life without it. I've seen myself as an orienteer from the beginning, but I think 2013 was my breakthrough into “professional“ orienteering, when I attended all three SkiO (European Youth), FootO (European Youth) and MTBO (Junior World) Championships. In EYSOC I managed to win the gold medal and, since then, there hasn’t been any way back.

Why Orienteering and why not Athletics, Ice Hockey or Football?

D. K. - I started reading maps before reading books. As my parents have also been orienteering coaches in our hometown school, I got the opportunity to learn orienteering with my friends. I was quite talented and did well in orienteering competitions from the time I ran the string course. In school I still sometimes participated in other sports competitions, but, as I didn’t practise other sports, my results didn't satisfy me and that’s why I've stuck with orienteering.

You are able to combine MTBO and SkiO, achieving great results in both disciplines. But, is there one that you prefer?

D. K. - In 2013 and 2014, I participated in all three orienteering disciplines’ Championships and as I got the best results in ski-orienteering (gold and silver medals twice), my biggest motivation was to train for winter. Since last year, I left FootO to focus more on MTBO and SkiO. My training plan is based on the vision that the main competition season is in the Winter, while in Spring and in Summer I combine roller skiing, running and strength exercises with biking. In my opinion, SkiO and MTBO fit together quite well, they make trainings more varied and keep my orienteering skills adjusted during the Summer, as well.

What do you see in these disciplines that make them so special?

D. K. - In the beginning, you mustn't think “just go and push as hard as you can“, because the results actually depend on keeping focused during the whole race and carrying your plans out on the course. Every race is unique and there is a lot to talk and analyse after every race.

With the third place in the Middle Distance in the last Junior World MTB Orienteering Championships, in Portugal, you achieved your best result so far. Did you expect it?

D. K. - After my results last year and this year’s 4th place in Sprint I must say that I was expecting it! I’d been close to the medal, but something was still missing. In the evening before the Middle Distance I started to think about the race. “It’s going to be The Day!”, I said to myself, keeping it in my mind in the next morning and also during the race. The target on that day was high speed riding and navigate smoothly. I kept full focused on the first half of the course, where I only made some minor mistakes. Two controls before the finish my bike’s chain came off on an uphill and, as I was already quite tired, it took me about 50 seconds to solve the problem. I knew I had lost lot of time, but I still thought I had a chance for the medals and pushed hard until the end. At first I was a little disappointed for losing the silver medal with that technical problem, but afterwards I realized that I really did what I was aiming for and I was extremely happy and satisfied.

Did you enjoy your week in Portugal?

D. K. - In the end of July the weather in Portugal was sunny and really warm – the temperature was of over 30 degrees every day. It was something new for me, because in Estonia there are usually only 2-3 days like this during the whole summer. I headed to Portugal with high expectations and I was really nervous before the first two races. After winning the bronze medal I felt really satisfied with the whole week, but still tried to focus for two more races. The beginning of the Long Distance was bad – I couldn’t concentrate at all and couldn’t find the best route choices. Halfway through the course it got even worse when I got a flat tyre. I started to walk towards the finish without thinking at all and made an extremely long and unnecessary distance that day, arriving more than three hours after my start. As I was the only female Junior from my country, I competed in Men Junior class in the Relay and it was more like an experience rather than going for the win.

You attended Lithuania for the World Cup in MTBO, along with the best Elite athletes in the World. How big is the clash between the Junior and the Elite categories?

D. K. - I was in a really bad shape in the beginning of October and I was also a bit sick during the competitions, so my results were below all my expectations and my races weren’t good and smooth at all. I lost too much time to the best Elite women in every distance. As I've seen earlier, the Elite women are real professional bikers with good navigational skills, they have more experience and they adjust faster to different situations – and these are the main differences between Junior and Elite categories. The clash between me and the Elite athletes is quite big, but not that big compared with the best Juniors.

D. K. - In the last ski-orienteering season I was able to compete in the two first World Cup rounds, in Finland and in Germany, where I made some satisfactory races and got a chance to compete in a lot of good terrains. My main goal was to compete well at the Junior World Championships in Austria, but I was totally disappointed with my results. My best result was the 9th place in the Middle Distance and that wasn’t exactly what I was aiming for. It was nice that we had enough snow in Estonia last winter, that all four distances of the Estonian Championships were held. In the individual distances I competed in Elite category and I got a medal in every distance.

What's the meaning of being an orienteer in Estonia?

D. K. - As our country’s orienteering-family isn’t as big as our neighbouring countries' (Finland, Sweden, Russia), it isn’t that hard to get into the National Team. I'm still Junior, but I've got the opportunity to improve myself, attending Elite Championships. The Estonian MTBO Team is quite small - I'm the only female Junior in our team -, attending the Championships, mostly, with the men Elite. But we get along quite well and it’s always instructive and nice to hear advice from the World Champions. The SkiO Youth, Junior and Elite teams have the same coach and train together. It makes the team bigger and gives young athletes the opportunity to learn from the older ones. We have had camps and weekend trainings together in the summer and in autumn, including high-quality trainings and meetings in the evenings. The SkiO team’s preparation gets better every year – the training camps increase the team’s unity, active organizers are able to organize competitions within a week and the team is full of athletes who enjoy ski-orienteering and being part of the Estonian National team.

Tell me about your older sister, Daisy. Is she, in some way, an inspiration to you? What other person do you see as a reference?

D. K. - My sister Daisy has set a good pattern for me and she is my biggest inspiration. As we spend much time together, I can see how dedicated she is to everything she deals with. A younger sister’s goal is to be better than her older sister and, for me, it has been a really big motivation for years. My goal in the last few years has been to beat her and I can say that I did it several times, which was really satisfying. I have learned a lot from her in different fields and her success makes me work harder, because I want to be at least as good and steady as she is. My father, who is also my coach, is my biggest supporter and the most important person in my sport career and, therefore, also in my life. I am immensely thankful for his commitment to my sport career. He is the one who is the most critical of my acts and his opinions, most of the times, matter the most to me.

What are your main goals for 2017, both in SkiO and MTBO?

D. K. - As it is going to be my last year as a Junior, it's my last chance to perform well and get better results than ever before. In SkiO, my main goal is to get in shape for the Junior World Championships, in Finland, and put my skis on the line with the other Juniors. Probably I’m also going to Krasnoyarsk, to the Elite World Championships, and this will be the second important competition-week this Winter. The main goal for me in the Summer is going to be the MTBO Junior World Championships in Lithuania. The terrains there are similar to Estonia and, as shown in the World Cup, in Kaunas, the races are going to be very technical and I hope I can turn this into my strength. But currently I’m more focused on the Ski Orienteering season and the MTBO season still seems quite distant. I'm going to help, as a volunteer, to organize the WOC in Estonia next Summer and I am already waiting for it with excitement to see the world’s best orienteers in Estonia. I also believe that Estonians will perform well on homeland and we’ll have many reasons to be proud of them.

What advice would you leave to the young athletes who are starting out?

D. K. - Try different orienteering disciplines and find the one which is right for you.