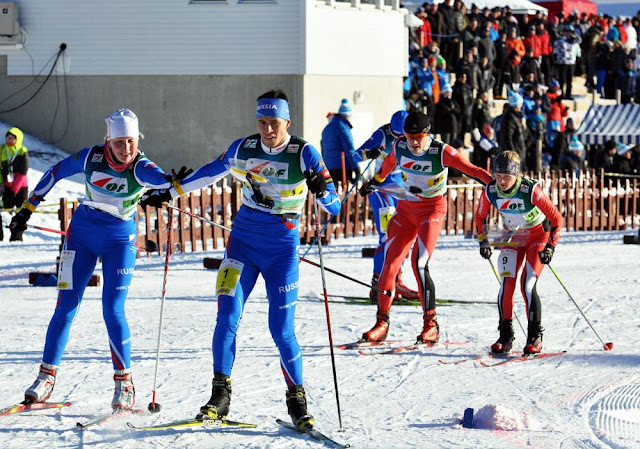 For the second day in a row, Andrey Lamov showed himself at the highest level on the European Ski Orienteering Championships 2017. Partnering with Polina Frolova, he was stronger than his opponents in a vigorous Sprint final, achieving the Mixed Sprint Relay gold for Russia. Sweden and Finland reached the immediate positions.


It couldn't be more exciting, the Mixed Sprint Relay that filled the second day of the European Ski Orienteering Championships, held in Imatra, Finland. 21 teams of two athletes each (one male and one female), representing 11 countries, started in search of the victory, but the fact is that Russia, Sweden and Finland took over the operations very quickly, bet on discussing the gold with each other. With three out of the six legs raced, Russia 1 (Andrey Lamov and Polina Frolova) was in the lead with a fifteen-second advantage over the most direct opponents. At the start for the last leg, the Russians' leadership remained, but the difference for the pursuing group (the two remaining Russian teams and still Sweden, with Peter Arnesson and Magdalena Olsson) had shortened to just 9 seconds.

The fight for victory peaked with only half of the last leg to go, at a time when all three Russian and Swedish teams were separated by narrow 10 seconds. And it was already in the arrival corridor that Andrey Lamov was able to find a last breathe to reach the victory, imposing on the Swedish Ulrik Nordberg over the finish line. Lamov thus reaches the European gold for the second year in a row (making pair with Alena Trapeznikova in 2016), while Nordberg also arrives for the second consecutive year to the silver medal, having to pair with Tove Alexandersson last year. Finland, with Marjut Turunen and Ville Petteri Saarela, finished in the third place, 1:20 after the winners, thus reaching the first medal ever at this distance since it was introduced, at the 2012 European Championships.

Posted by Joaquim Margarido at 6:29 pm