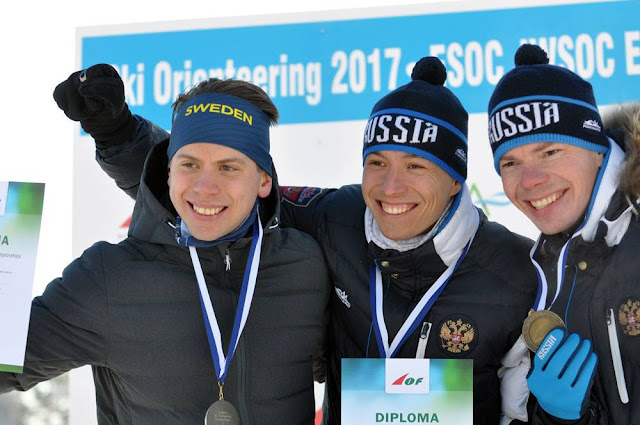 Andrey Lamov and Alena Trapeznikova achieved gold medals in the Long Distance Mass Start of the European Ski Orienteering Championships 2017. The battle for victory was incredible hard, with Markus Lundholm and Tove Alexandersson finishing in the second position.


The European Ski Orienteering Championships 2017 already have a king and the king has a name. Andrey Lamov, Russia, was able to reach the gold for the third day in a row and deserves, for sure, the title. After two amazing achievements, Lamov presented himself at the Long Distance Mass Start as favourite, even knowing how hard were the last five hundred metres of yesterday’s Mixed Sprint Relay and the “damages” of such fight. Long and technical, today's course would be decided in the last part, with Lamov and the Swedish Markus Lundholm joining in the lead after recovering from a two-minute disadvantage. Carrying forward an unmerciful one-to-one contest for the last controls, Lamov and Lundholm stretched the final decision until the very end, finishing separated by one single second. With more 40 seconds than the winner, Kiril Veselov, Russia, reached the bronze while the European Champion in 2016, the Norwegian Lars Moholdt, was tenth placed, being the first neither-Russian-nor-Swedish athlete to finish the course.

The women's race was also decided on the finish line, with the Russian Alena Trapeznikova outperforming over the favourite Tove Alexandersson, Sweden, winning for only two seconds. Mariya Kechkina, Russia, started better, showing great determination in revalidate the title achieved last year in Obertilliach, Austria, but her winning breath only lasted half of the race, with Alexandersson and Trapeznikova taking on the protagonism in the decisive moments. Kechkina reached the third position, two minutes after Trapeznikova. Also here, Russia and Sweden filled the top places, the Finn Salla Koskela being the first athlete to break this solid barrier by finishing in the eight position.

Posted by Joaquim Margarido at 7:20 pm