Jonas Egger: "Orienteering will never be a stadium-sport" 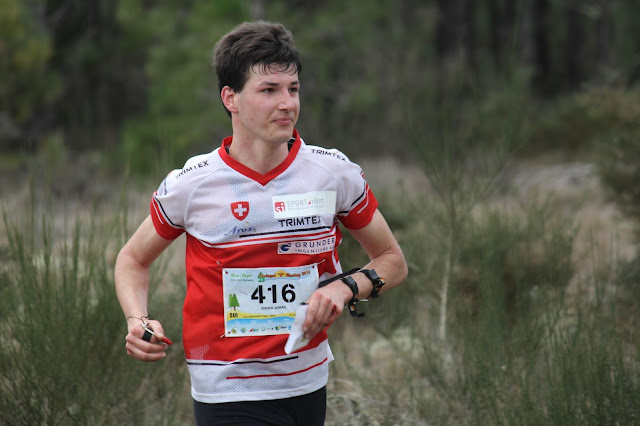 The new generation of Swiss orienteers has in Jonas Egger one of its most illustrious names. Portuguese Orienteering Blog's guest in another great interview, he presents himself, looking back at a career full of good moments which allow him to face the future confidently.


I would start by asking you to introduce yourself: Who is Jonas Egger?

Jonas Egger (J. E.) - I’m a 22 year old orienteer from Switzerland. I live and study in Burgdorf, a small town close to Bern. Before I started studying Civil Engineering, I worked for four years as a Surveyor. The fact that I've always been fascinated by maps was the reason I chose this profession and it also explains my passion for this sport of running and navigating.

How were you introduced to Orienteering? Can you remember some of the most important moments of your early career?

J. E. - Like 99% of orienteers, I started doing Orienteering because of my parents. I think the most important happening was my first JWOC in 2013 where I realized I wanted Orienteering to be more than just a hobby. It was when I stopped playing floorball and started to train more seriously.

J. E. - The most fascinating fact about Orienteering is that you have a complete new challenge every time you pick up a map. Whether it’s a new map, a new course, a new type of terrain or different conditions, you always have to decide your route and the speed under pressure. And it doesn’t start at the start line. The mental, tactical and physical preparations are really important and give you the right mood for competing.

J. E. - I’m very happy with last season. Mainly because I was able to perform at my best during the highlights of the year which were the EOC (16th in the Sprint), the WUOC (2nd in the Sprint) and the World Cup Final (20th and 21st). The fact I was in the Military Service and trained professionally during the Spring led to a great shape, shortening the gap to the swiss A-team. In the beginning of the year, I didn't even think about running all the World Cup stages, except the WOC. With the CISM in Brazil the season came to a great ending and, if you have such great team mates, even two average 24th and 26th places can bring you a World title. The big challenge for the coming season is to keep up the progress.

Was there a particular moment along the season that will last forever in your mind?

J. E. - At WUOC I achieved something I'd never done before. The silver medal was my first individual medal at any international Championship. The situation before WUOC was completely different from EOC or the World Cup because I knew I was in good shape and, due to the missing top runners, I would have the chance to fight for medals there. I wrote on my webpage that my goal would be a medal and, since I really bet on the Sprint during the first half of the season, I was under quite a bit of pressure… which I felt at the start line in Lillafüred. I was more nervous than ever before and such a situation, along with being able to deal with it in a tricky Sprint, was quite valuable. This is what is expecting me at WOC.

I'm sure you followed the big events along the season. What moments / athletes impressed you the most?

J. E. - The most impressive moment was the success of Anastasia Denisova at WOC. And I'm not just talking about the medal in Sprint but, specially, the good results in the forest disciplines after this big surprise. In the absolute highlight of the season, she showed that it’s possible, with passion and dedication, to succeed, even if you are from a country where Orienteering has almost no support. Congratulations!

Do you have a person/athlete who is an inspiration to you?

J. E. - The one and only Dario Cologna. He is professional in every fiber of his body and super friendly in a natural way, too. It’s interesting to follow how he improves his shape every season. He might be far behind in the first competitions but he fights for the win in the big races. And when he wins, he does it like a champion.

What does it mean to be part of the Swiss Orienteering team?

J. E. - Even though we aren't the world’s best national team, it means a lot to me. I can learn from the second best ones and we have a really good atmosphere within the team. On the other hand, the name stands for good results and, together with my team mates, I'll work hardly so that it stays like this in the future.

Searching on the web, we can see that you have a personal page - http://www.jonasegger.ch/ -where you share your thoughts. Can you present your “work”? How important can a webpage be?

J. E. - I don’t see my webpage as a platform where everyone can read my deep or important thoughts. It’s more for people who are curious about what an orienteering athlete is doing and how I train and compete during the year. But, who knows, maybe it will change when orienteering becomes the number one sport and everybody knows what I’m doing.

I think a personal page can be important for companies or associations who support you. With a webpage, the appearance of an athlete is more professional and they can see what's happening with the support they give. Of course the blog has to be updated, otherwise it gives a bad impression. Everyone should do what they feel comfortable doing. In general, I think orienteering has good opportunities to grow through live streaming and the media, which bring the action to the people. Orienteering will never be a stadium-sport.

“It's in the winter that you win the upcoming Summer medals”, Thierry Gueorgiou says. How is your Winter season going?

J. E. - My winter season started late due to CISM in mid-November. I had a good first part but, at the end of the year, an inflammation in my knee made my life difficult. It got better in January and I could do nice training sessions, for example, in a camp in Gran Canaria. And, right now, I have some small problems with my calf. But, I mean, if you feel nothing you are most probably dead, which means that I’m still positive for the upcoming summer.

J. E. - Since we got some extra slots for the WOC, I won't give up on filling one of them. But it won’t be a disaster if I watch the WOC from home. For me, it's more important to have a regular start at the World Cup stages and get the experience from it.

J. E. - Besides the mentioned individual goals, a new project with “ol norska – raskt tog team” started this winter. We, as a Swiss club, will run Jukola together, trying to get the title for the best ranked non-Scandinavian team, which is from IGTISA and our local opponent, OLV Baselland, so far, with a 21st place each, if I’m right. Our idea behind this project is, instead of each athlete running for ‘his’ Scandinavian club, being able to compete with daily training partners together. Jukola is a team-relay and, in my opinion, what makes the team is the practise and the long time before the competition.