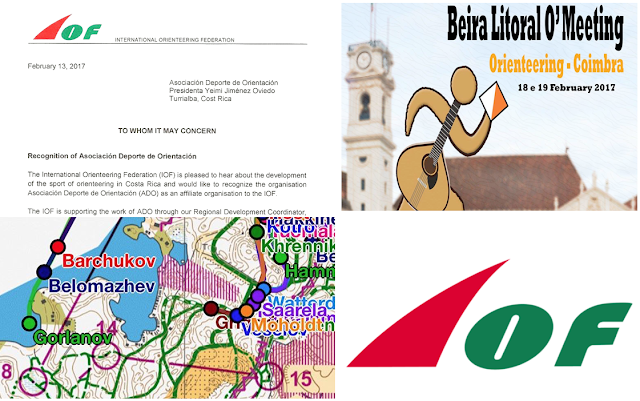 1. The city of Coimbra is ready to host the Rainha Santa Trophy / Beira Litoral O' Meeting BLOM 2017, event that kicks off a sequence of three weekends on a row of the best Orienteering in Portugal, which is completed by the Portugal O' Meeting 2017 and the Aguiar da Beira O' Meeting 2017. The competitive program starts tomorrow with a Sprint WRE, which scores for the IOF Sprint Orienteering World Ranking, followed by an urban Middle Distance stage in the afternoon. The event's second day will be fulfilled by a Middle Distance stage, scoring for the IOF World Orienteering Ranking. The number of entered athletes is close to seven hundred, representing 18 countries. Timo Sild, Oleksandr Kratov, Hector Haines, Mårten Boström, Lucas Basset, Simon Hector or Olli Ojanaho, are just some of the 88 competitors in the Men Elite class. In the list of 44 competitors in the Elite Women class it's possible to see names such as Helen Palmer, Mariia Makarova, Irina Nyberg, Adela Indrakova, Anna Bachman, Karolin Ohlsson or Isia Basset. Everything to follow at http://blom.admondego.pt/.

2. The International Orienteering Federation has been pleased to hear about the development of the sport of orienteering in Costa Rica and has just underlined its satisfaction by recognizing the organisation Asociación Deporte de Orientación (ADO) as an affiliate organisation to the IOF. “The IOF is supporting the work of ADO through our Regional Development Coordinator, Mr Jose Angel Nieto Poblete from the Spanish Orienteering Federation. In this way, the IOF has an official relationship with the organization in Costa Rica. (…) We look forward to continuing to work together with ADO to fully establish the sport of orienteering in Costa Rica”, says Tom Hollowel, IOF Secretary General / CEO, in a letter addressed on February 13th, 2017, to Yeimi Jiménez Oviedo, ADO's President. This is the culmination of 10 stages of work developed over 6 years by Jose Angel Nieto Poblete, who seizes the opportunity to express a note of joy and a thank you on his personal page on Facebook: “All thanks to a group of enthusiasts 'Ticos' of this sport. Our goal, now, is to keep working, keep massing, with the goal of becoming a [provisional] member of IOF in 2018. We keep moving forward!”, he says.

3. There is a black shadow hovering on the recent organization of the European in Ski Orienteering Championships, held last week in Imatra, Finland. The issue was initially raised by Santeri Aikio in his personal blog [HERE], eventually leading to a heated discussion about what is considered an illegality in the Middle Distance race, M21 class, made legal by the jury's decision. The question is simple and can be summarized as follows: After the middle distance at ESOC, the organizers chose to disqualify nine male athletes and one female athlete for going across a forbidden area, a lake mapped with the ISSkiOM symbol 301.2 Uncrossable waterbody (forbidden to cross). By going over the lake you could gain approx. 40-50 seconds. A complaint was handed in against the disqualifications, but it was rejected by the organizers. Then a protest was made against the organizers decision and the jury’s decision was as follows: (1) The nine male athletes were included to the results. (2) Jury cut off the men’s course from control 7 to control 8 and the new results were calculated from start to control 7 + from control 8 to finish. (3) All other classes in the competition were left unchanged. The SkiO Athletes Commission has already ruled on this issue, considering the jury's decision “wrong and unacceptable”. On the other hand, Tom Hollowel, IOF Secretary General / CEO, also came to explain that “it's important to note that, in accordance with the IOF Ski Orienteering rules, the decision of the jury cannot be appealed, not even to the IOF Council.” IN the midst of this embroilment, Santeri Aikio takes the voice of the majority: “For the future of ski orienteering, the best winter sport there is, and for fair play, and for our reputation as a seriously taken sport, please, put an end to this nonsense!”

4. Many important topics were on the agenda for the recent IOF Council Meeting in Warsaw, 20-21 January. From the taken key decisions, we highlight the appointment by the Council of the Czech Republic as host of the 2018 IOF General Assembly; the approval of the proposed World Masters Orienteering Championships program, which will be introduced from WMOC 2018 in Denmark and will consist of Sprint Qualification, Sprint Final, a rest day, Forest Qualification, Middle Distance Final, another rest day, and finally the Long Distance Final; the approval of all principles in the ISOM 2017; and a principle decision, following a presentation from the TrailO Commission, to instate a World Ranking system in TrailO, whose details will now be worked out by the TrailO Commission, with the intention to introduce TrailO World Ranking Events from 2018. For more information, read the complete Council minutes HERE.